Was Harold Wilson a Soviet Agent? 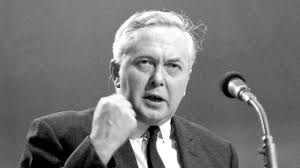 In my book ‘A Handful of Hard Men’ I touched on the possibility that British Prime Minister Harold Wilson may have been a Soviet agent. In the book I relied on a report in ‘The Spectator’ magazine which disclosed the contents of the diaries of Soviet contact man Alexander Chernyayev in which he refers to a ‘special’ and ‘reverential’ relationship between Labour Party leaders and their Kremlin ‘comrades’. It also became known that Jack Jones, leader of the Transport and General Workers Union was a KGB man when he was not wielding enormous influence within the ruling party. This position drew scorn from many people who believe Wilson may have been a committed socialist but surely not a Soviet spy.

Well a recent article in the ‘Mail on Sunday’ by Martin Pearce throws more light on this subject and bolsters the view that Wilson, if not a full-blooded agent, was certainly in the thrall of individuals who were driving Moscow’s international agenda.

The man at the centre of this murky saga was Maurice Oldfield, the portly, bespectacled, boss of MI6 who was tasked with investigating how deeply the KGB had penetrated the Westminster establishment. Oldfield was acting in receipt of disturbing information supplied by KGB defector Anatoliy Golitsyn who claimed that Wilson was in fact one of their ‘assets’ but Oldfield needed to know more. Giving it the ring of truth the MI6 chief was already aware that the British trade-union movement that provided the platform to power for the ruling Labour Party was heavily influenced by Moscow.

In 1974 a mysterious burglary took place at 10 Downing Street and documents belonging to the prime minister went missing. The British public were not informed and the crime was kept so secret not even the police were informed. Clearly there was much mischief afoot and Oldfield was one of very few in the know.

Fuelling further suspicion was Conservative MP Winston Churchill (grandson of the wartime leader) who wrote to Wilson late 1974 to warn him that one of his closest associates, Joe Kagan, was very friendly with known KGB officials. Despite this entreaty Wilson continued his relationship with Kagan and Rudy Sternberg, another successful businessman with East Bloc connections. Of these two Bernard Donoughue, Wilson’s Head of Policy at ‘No. 10’ had this to say: “There was no doubt in my mind,” says Donoughue, “that both Kagan and Sternberg were Soviet agents.” (Kagan would go on to become a life peer, Baron Kagan, before being jailed for fraud and tax evasion in 1980.)

By the middle of 1975 MI5’s Peter Wright was thoroughly convinced and insisted on being given an opportunity to confront Wilson with the evidence to hand that he believed, proved the prime minister was a traitor however he was countermanded and Oldfield intervened to direct the course of events. By this time it had become clear to British intelligence that Wilson’s tenure was increasingly precarious and with news of the fact that the contents of the some of the documents stolen in the No. 10 break-in were about to be made public Wilson promptly resigned his office. Just what was in those is not known but clearly there was sufficient incriminating evidence to compel the prime minister to exit quietly in return for non-disclosure.

Where this is interesting to us who are still trying to make some sense of our history is it goes some way to understanding why British plans to invade Rhodesia reached such an advanced stage. The Soviets would have been delighted to see the British fight their fight for them knowing that the violent overthrow of the white government would have left the door wide open to advancement of their own imperial designs. It is now known that were it not for the reluctance of senior British military commanders that invasion may well have taken place and this begs the question as to who was driving the British prime minister’s policy on the matter. More and more it appears Moscow was involved.

This goes some way to vindicating Ian Smith’s actions at the time and his decision to declare UDI. Smith argued he had tried to find common ground but had hit a brick wall and that now seems perfectly understandable. Later, he was locked in intense negotiations with Wilson after UDI on the warships ‘Tiger’ and ‘Fearless’. Many have criticised Smith’s obduracy, insisting he should have been more reasonable but Smith was chary of Wilson’s demands and now we have a better understanding of the nature of the man he was up against.

In hindsight it may be fair to say it mattered not what Ian Smith might have agreed to with Wilson. The British agenda was in sync with the Soviets and they wanted to crush white rule at whatever cost.

One thought on “Was Harold Wilson a Soviet Agent?”