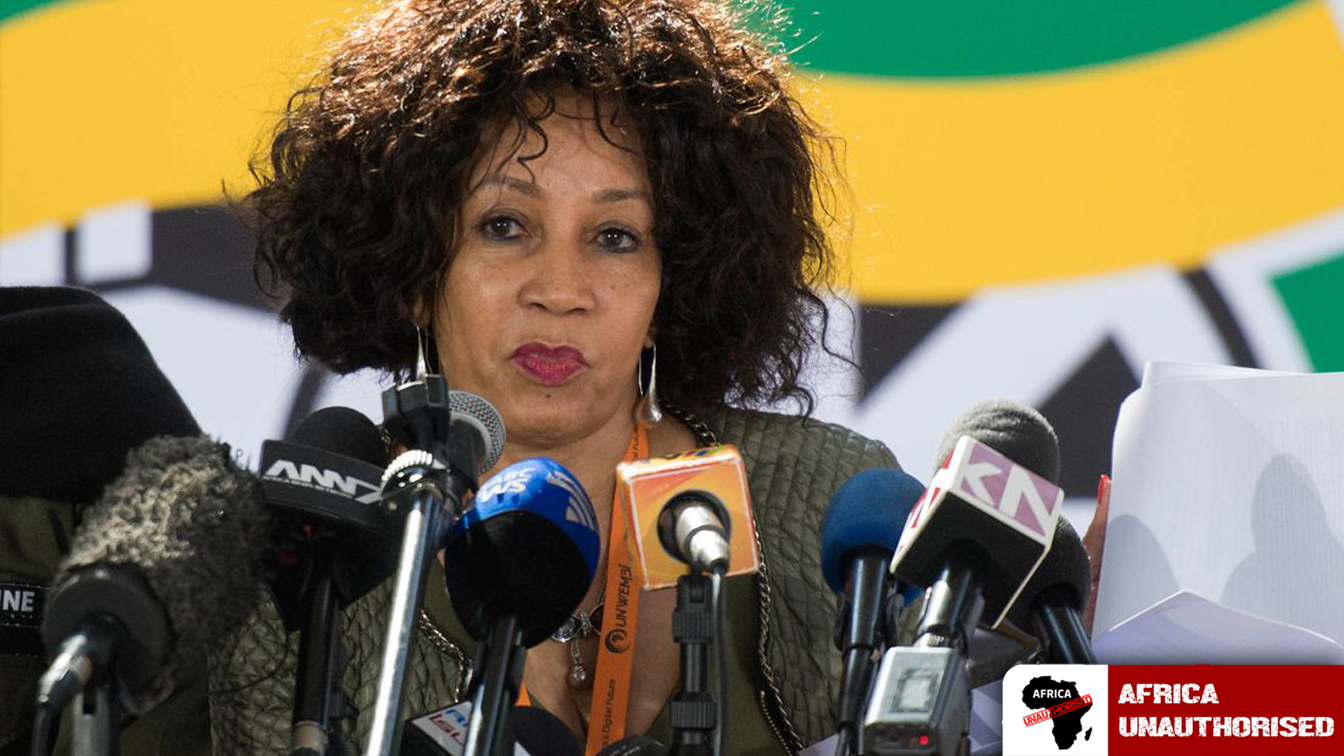 A great deal has been written (and talked about) since Lindiwe Sisulu came out with her criticism not only of the Constitution but also of black judges.

What she didn’t say is what columnist Chris Roper wrote and that is that the ANC is a party of plunder. This ineffectual Minister, who has had to be moved from portfolio to portfolio seven times in her 21 years in the Cabinet and who has had to rely on her famous surname to remain in Cabinet, is hardly in a position to criticise the ruling party.

This week, after a meeting where the President met with his Minister of Tourism, the Presidency came out with a statement saying that the Minister had withdrawn her statement and had apologised for her attack on the judiciary. Almost immediately Sisulu sharply retorted that she did not take back one iota of her views and the Presidency should tell the truth about the meeting where it was agreed that only one sentence would be rewritten and she would be given the opportunity to approve that change before it was made public.

If this is not an attack on Ramaphosa and his leadership then I don’t know what is and I would have expected the President to fire Sisulu on the turn. In fact he should have fired he long before any meeting. But has Cyril done that? Don’t be silly.

His tactic is the long game and he will wait and wait and eventually, I guess, it will all become immaterial. And hopefully the ANC will become equally immaterial.

The editor of the Sunday Times this week called Ramaphosa a wuss in his editorial, the word that I am so fond of using to describe our President; in fact he went further and suggested a new word for the English dictionary; “cyril” someone devoid of a backbone.

I rest my case.

Don’t think that Survé’s papers are not taking Sisulu’s part and are congratulating her for……..?

This country cannot survive with the quality of cadres elevated to run the country. And to have a wuss as a President does not help especially a President who is too weak to even fire a defiant Minister.

He goes further to say that should Cyril fire Sisulu from the Cabinet she will be seen as a martyr and become a hero to the RET-faction. But doing nothing does make Ramaphosa look weak, admits du Preez.  This is Zapiro’s take on Sisulu’s effort at ANC leadership, from Daily Maverick:

Faction fighting in the ruling party took to the front pages of our newspapers again this week. Mervyn Dirks is a loyal Zuma supporter and an influential ANC MP and party whip in parliament. Well, he has lost his position and has been suspended and all because he wants Ramaphosa to be investigated for admitting, in a now leaked audio clip, that the ANC has used public funds for internal party campaigning. In fact Cyril is heard to be encouraging that activity in that clip. Dirks, an ANC whip in the SCOPA (The Standing Committee on Public Accounts in Parliament) wanted to summons President Cyril Ramaphosa to account for what he said. Dirks claims that is corruption but the ANC have stated that Ramaphosa’s utterances were against corruption. This is explosive stuff and the news agencies are having a ball.

Then on Tuesday the matter got even more exciting in that Dirks decided to oppose this suspension and appointed an EFF top shot (Goodrich Gardee) to represent him in his attempt to have his suspension set aside in court because the ANC will not lift his suspension.

The Western Cape High Court struck the matter off the roll, with costs, saying it was not urgent.

Ramaphosa will now have to write a report, though he will not personally come before SCOPA, to explain his utterances.

It is obvious to note that Ramaphosa has not made any difference to the corruption in the ANC.  The SIU report on PPE (personal protective equipment) financing has just been made public and it is embarrassing and totally criminal to see even Ministers and political big-shots involved. 62% of the Covid accounts have been found to be irregular and R14.3 billion of contracts are being probed.

In spite of Ramaphosa’s promises when he took over,  corruption has remained endemic in the Party and there has been no slowing of the curse even since the departure of the Guptas. This has become even more visible with the Zondo report.

Making (less) news this week was the snotklap the woefully weak Public Protector but loyal Zuma cadre, Busisiwe Mkhwebane, received from the courts when she was chucked out of court for trying to overturn a damning judgement against her with regard to the “rogue unit”. Again costs have gone against her and these legal costs awarded against her are now mounting astronomically.

DD Mabuza is our Deputy President and it is he who flits off to Russia for weeks at a time for no known reason. He is in trouble. A case against him has at last come to court and the evidence is not nice. He is accused of massive corruption and even murder and books have been written about this. He has used JZ’s Stalingrad tactics to keep the matters in abeyance but the Judge has had enough and the matter after almost 12 years of delay has come to court. To quote Daily Maverick, DD is not sleeping too well these days.

Two weeks ago on a Sunday fire broke out in Parliament and caused damage that is going to take years to repair. This past Sunday a fire broke out at another National Key Point, Waterkloof Airforce Base. And last week the SABC was broken into. Some  are asking whether this is not (Sunday) sabotage?

Some very good news is that the World Bank has granted SA an R11 billion low interest loan to help fight the pandemic and assist the depressed economy. This shows that SA has regained some support from a very important and critical world body.

Don’t waste it fellows! This is Brandan’s cartoon from Business Day:

The DA has had a bad week. Their young mayor of Midvaal, Bongani Baloyi who did such magnificent work and achieved 7 successive annual clean audits for his town, has joined AfricaSA, Herman Mashaba’s party. Then the long-time DA provincial stalwart in the Western Cape, Albert Fritz, who is also the provincial leader of the Party has been suspended awaiting charges of a sexual nature. Fritz is a very high-profile character in our Province and speculation about this matter abounds. The stories we are hearing are not nice.

Fires were one of the unfortunate results and several broke out in the Winelands. The beaches were packed but  it is terribly uncomfortable when it gets that hot and fortunately it is a rare occasion. Are you listening you global warming sceptics?

On the social agenda this weekend there was a difference. Jeffrey and Rene have a lovely holiday home down the road in Gordon’s Bay. They are wonderful hosts where our lunch lasted almost 5 hours and I even got given delicious “padkos” from Rene to take home. One of the main attractions of being with Jeff & Ren was catching up with Ellian, whom I hadn’t seen in years. Ellian now lives in Bangkok and we got to meet his lovely Thai wife, May for the first time. Ellian and I go back a long way to our university days and he remembered fondly my late Yiddish-speaking Granny when he would “suddenly” arrive at our home in Stellenbosch, early evening, and then stay for dinner.

We also reminisced about the times I was in the East buying for Group Appliances when he had offices in Hong Kong and China. But the highlight of our luncheon was the reminiscing between Ellian and the world champion. It was he who introduced me to the world champion and we have been married now for a few days short of 50 years. In these 50 years she has never lost a fight and so remains the light-weight champion of the world.

Ellian and Esther lived next door to each other when I one evening was playing cards at his place and this beautiful blond came in and knocked my wind away. The rest is history. The two of them just didn’t stop talking, so now you know why lunch took so long.

CricketSA has brought racism charges against coach, Mark Boucher. It is almost certain that Boucher’s good buddy Graeme Smith, Manager of Cricket SA will also be investigated and the news is that some wealthy farmers have agreed to pay for Boucher’s defence team.

Our Springbok Sevens rugby team, the Blitzboks, have won the World Sevens series championships for the fifth time in a row. No wonder they are the top ranked team in this shorter form of rugby. But they didn’t have an easy passage in the final against Argentina this past weekend when they only scored the winning points after the final hooter had already sounded.

On Sunday the cricket was terrific and the football was dreadful. Our Proteas followed up their series win in the test matches against India by white-washing them in the 50-over series.

As good as the Proteas were so bad was Tottenham. They were completely outplayed by Chelsea in their league match on Sunday evening and it really does look as if Conte needs new blood to inject more positivity into his team. Neither the coach, sitting with me on the couch, nor I enjoyed that game very much.