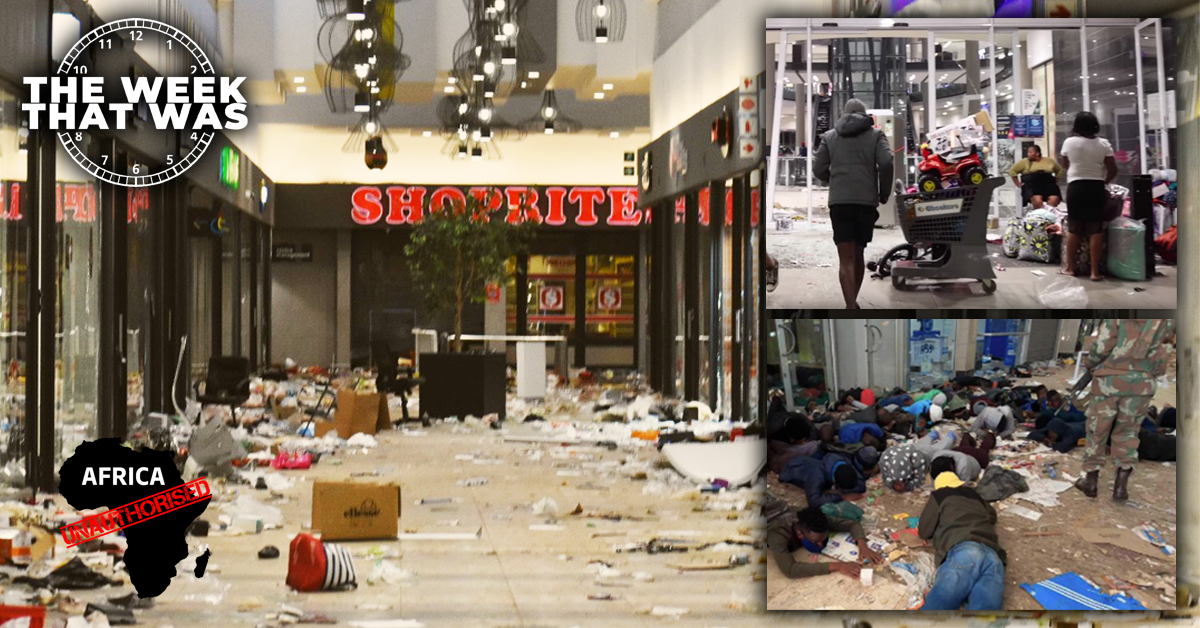 Last week SA made international news because Jacob Zuma went to jail. This week SA made international news because of the rioting, flagrant looting and vandalism that was blamed on Zuma’s arrest but has much more to do with the ANC’s inability to address the inequality, poverty and the enormous unemployment of the young people of our country or to keep control where two thirds of those under 34 years of age do not work.

To blame Apartheid, as so many do, for this criminality is disingenuous. To blame it on the arrest of Zuma is equally untrue. The ANC has been in government for 27 years and has done very little to address the unemployment problem. Instead they have seen to it that the elite get cushy jobs and cronies get employed, many without having the necessary skills to properly perform their tasks. No wonder we have no economic growth. Let’s not even mention State Capture by those ANC cadres and the billions they syphoned out of the Fiskus that affects each one of us so directly.

On all of our TV channels we have seen this horror movie playing itself out in real-time. The deaths and looting have been scary to witness in this latest upheaval. Several looted Shopping centres have been set alight and some have been reduced to rubble. Roads have been blocked and huge trucks stoned and set alight on the National highways.

The police are weak and poorly trained, poorly led and like everything else that this government does, ineffectual. Two of the last three heads of police have been sacked for dishonesty and the Minister of Police is a buffoon with a seriously scarred track record, he was found to be dishonest, was sacked as Police Commissioner and now is the Minister of Police……..that’s ANC cronyism in action. It is sad that TV reporters (even from Skye & CNN) get to the points of anarchy far sooner than our police

What does that tell you?

The looting has been so easy that we have seen on TV where some perpetrators wait for their taxis at the stopping areas of the Malls to load their loot and then go back to loot more.

This looting of the shops and shopping centres in Gauteng & KZN has made news all over the world. Our news channels showed how everything from mattresses and fridges to clothing and groceries and even medicines and pharmaceuticals were brazenly being carried out of the stores until every single shelf of every single shop was empty and nothing, but nothing remained in the stores.

The looting in Johannesburg and Pietermaritzburg was so alarming that on Monday & Tuesday several shopping centres in Cape Town closed mid afternoon and extra security guards were placed on vigil. This is Zapiro’s take on the looting from yesterday’s Daily Maverick:

Bheki Cele, our Min of Police, said last night that the plundering of economy is a ploy to overthrow the Government. Actually it is because the millions living in shacks in the Townships are hungry.  Jobs would solve the problem. Our policing is so poor that now he conceded that not 2,500 but 25,000 members of the SANDF (Defence Force) will be deployed to come to assist the police to restore calm in the two affected provinces.

Do you know how this rioting affects our vaccination roll-out when even vaccination stations in Malls get vandalised and robbed?

Worse; have you any idea what this does to the investment prospects for SA that Ramaphosa keeps on telling us about?

Have you seen what has happened to the Rand this week? Who will invest in this country when all this is going on?

Adrian Basson of News24 writes that this disruption can largely be attributed to the incitement stoked by Jimmy Manyi (spokesperson for Zuma—-what does he need a spokesperson for, he is never shy to speak) and three of Zuma’s many children who should be arrested and criminally charged for incitement. Now the DA has laid charges of inciting violence on Julius Malema and those three of Accused No 1’s children.

Jesse Duarte, Deputy Sec-Gen of the ANC has said that “action” will be taken against a Zuma daughter for her tweets. Does that not just mean, in ANC language, a slap on the wrist and a warning?

Oh, Julius Malema has been (banned) by Twitter. I am not sure for how long.

Jacob Zuma is in jail, is wearing an orange overall and does not have the convenience of a cell phone. That he is being treated better than other “regular” convicts I have no doubt, but at least justice has been seen to have been done.

Last Friday was not a good day for either Jacob Zuma or Ace Magashule. Both lost their respective appeals to have their judgements overturned and both lost, with cost orders going against them, in different high courts. That’s like losing a football match 8-0.

But, not unsurprisingly, knowing who we are dealing with, that was not the end of the line.

Zuma’s supporters came out in numbers in KZN (KwaZulu-Natal) and disrupted the main highways like the N2 & N3 with rubbish and burning tyres demanding ‘justice for the President’ after being encouraged to create the mayhem by Zuma’s family and the likes of Jimmy Manyi and Carl Niehaus. Ace Magashule, still calling himself the General Secretary of the ANC, notwithstanding his suspension and the lost appeal to overturn that ruling, gave a long, long interview on TV, not letting the interviewer interrupt his monologue on what he is going to do (appeal again, to a higher court, of course) and he has threatened to spill the beans on all those who benefitted so greedily from Cyril Ramaphosa’s CR17 campaign in 2017 to become leader of the ANC and SA.

We have heard those threats before.

Ace comes to court to defend his corruption, fraud and money laundering charges on the 11th of next month.

Then to add to the RET-faction’s weekend woes; Carl Niehaus arrived at the prison holding Zuma on Thursday afternoon after having been warned by the police to refrain from inciting the crowds and threatening civil war. Well, as soon as he arrived he addressed the crowd and after telling them what to do he immediately started an interview with a TV station. He didn’t finish that interview. He was removed by police, put into the back of a police van and taken to the station and charged with crowd incitement.

He is out on bail with a strong warning.

On Sunday night Cyril had another ‘family chat’ on TV. He was as sombre as usual and he extended the strict lockdown, as the Delta variant of the Covid pandemic surges, with a few small concessions mainly to the restaurants. Liquor sales are still prohibited and schools remain closed. The pandemic is playing havoc with lives, mainly in Gauteng and the third wave has not yet reached its peak.

Then after the rioting had begun, on Monday night, Cyril came onto the TV again to chat to the Nation. I would have expected him to bang his fist, stamp his foot on the ground, show anger and warn the looters that all hell will be let loose on them if they continue with their criminality. But in a hollow speech he told us of the damage to the economy this rioting is causing —-seeing shopping centres burning and rubbished one doesn’t need the President to tell you calmly that this is hurting the economy. He is a wus.

He did say the the army has been called in to support the police to stop the looting but we have seen very little of them so far, not that the police are that visible.

Not only the President but the Government, too, has been almost totally invisible while ‘SA burns’.

Three excellent articles that I came across this week are from Mark Barnes, Helen Zille and Prince Maschele. In an article in the Sunday Times Barnes points out that the way to effect an end to all the criminality we see in this country is to arrest the big-shots. How many of those tainted cadres have even been charged? What usually happens is, when it gets too hot, they get moved to a different Dept and usually with a promotion, often even an Ambassadorship.

Those involved (goodness knows, they are well-fingered in the press and are known to all) must be arrested and held in jail and kept there until they tell the truth about what is going on, writes Barnes.

Helen Zille, erstwhile leader of the DA, wrote an absolutely fascinating piece on Jacob Zuma which is totally enlightening. We are in Africa and no one is more African than Jacob Zuma. Western constitutionalism means little  to him. If you would like to read it just drop me a line.

The third article was from political analyst, Prince Maschele. This is a brilliant summary of exactly where we are and who Zuma is and this I can also send on, too. There was no way I could send out this missive without this cartoon from Zapiro from the Daily Maverick this weekend:

For the last 15 years Zapiro has been drawing Zuma with the shower-head on his head. He has never once not shown Zuma without it.

Those of you overseas may well be unaware of the significance of that shower-head.

It was because of the trial where Accused No 1 gave evidence when he stood trial for raping his best friend’s daughter. He told the court, and all of SA, that after the sexual episode he took a shower because he was aware that Kwezie, the complainant, was HIV infected and he needed to take precautions since they had had unprotected sex.

That Mampara deserved the shower-head that other cartoonists have copied from time to time.

Zuma threatened to sue Zapiro for that drawing. He made a song and dance about it at the time………but of course, he is just all bluster and nothing became of that threat.

Dennis, that character of note, organised a coffee catch-up yesterday. We hadn’t met for weeks and most of the usual suspects turned up to chat about nothing very important. These chats are always so good and they often turn out to be a highlight of my (rather quiet) locked-down week.

Ireland beat the Proteas for the very first time in their ODI match on Tuesday. The SAns were outplayed and were well beaten by a team without any stars at all.

Then last night the British and Irish Lions played SA ‘A’ at the Cape Town Stadium, our new home for rugby in the Mother city. The SA team was virtually the entire Springbok team that won the World Cup 19 months ago. In a hard game with some lovely highlights the SA team inflicted a first loss for the tourists. Final score 17-13.

5 thoughts on “The Week That Was”