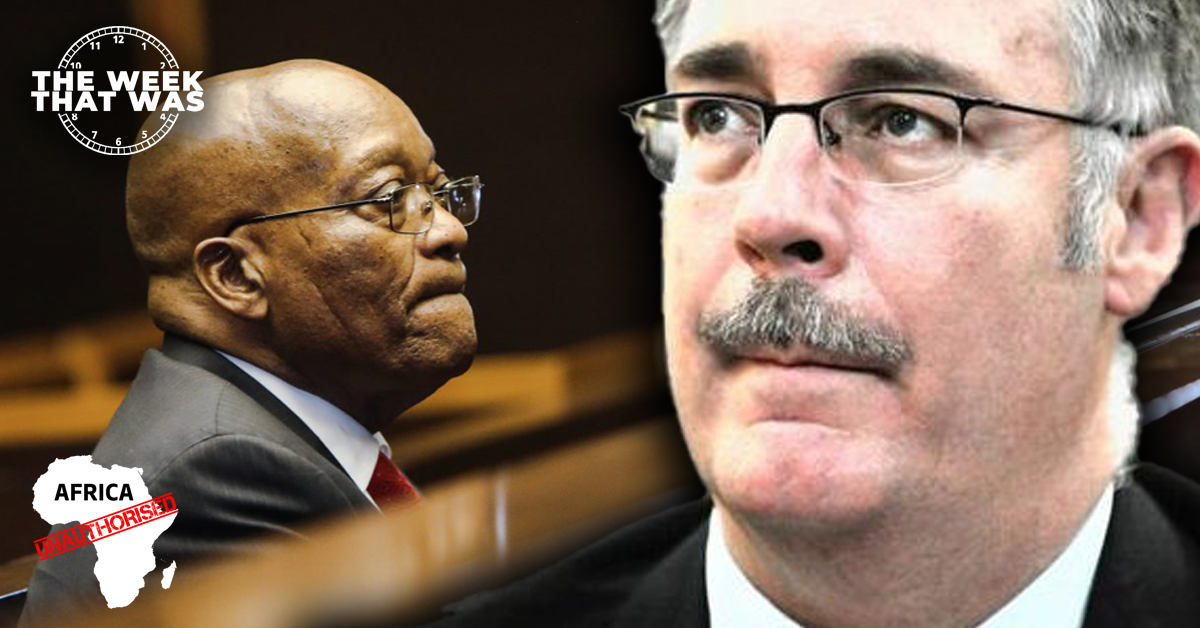 Over the past weekend we learnt that the ANC has appointed a really top level legal team to oppose Ace Magashule’s court action to have his suspension, as Secretary-General from the Party, nullified. Magashule also applied to have his suspension of the ANC President, Cyril Ramaphosa, confirmed as legal. Then he wants the court to nullify Ramaphosa’s demand that he apologise, to the Party and to the Nation in writing, declared to be invalid. He has plenty of money for these legal trysts and anyway he is still on full pay from the Party. The ANC, however, has no money. It owes. It owes SARS for arrear taxes; it owes its staff for arrear wages. So is Ramaphosa paying these legal eagles from his own pocket?  Probably.

This is going to be another ‘space to watch’ when this matter comes to blows —I mean comes to court.

Then the king of Stalingrad-tactics, Accused No 1, was in the dock of the Pietermaritzburg High Court bright and early on Monday morning to face those corruption charges that were brought 17 years ago, but as you guessed, he had yet another trick up his sleeve to delay the inevitable. He has new lawyers and they asked the Court for a postponement as they need time. They also had a very unusually request when on Monday they asked the Court to remove Adv Billy Downer as chief prosecutor. Why request the removal of a prosecutor? Fear? This is a long shot that doesn’t have a hope in hell of success.  For both of those reasons JZ has asked for a trial-date extension.

The courts are getting pretty sick of his delaying and have postponed the case only until this coming Monday. (Paul tells me that the Judge appointed to this matter takes no nonsense. Good!) Let’s see what JZ has up his sleeve for then, having already delayed this trial for all this time and having apparently spent R25 million on legal costs already.

Many of the ANC bigwigs were in court to lend their support on Monday. Tony Yengeni, Ace Magashule, Supra Mahumapelo, Carl Niehaus and Sihle Zikalala, leader of the ANC in KZN, arrived to show their undying support for Accused No 1, their patron.

After the Court hearing the bigwigs addressed the crowd that had gathered outside the court. Magashule promised that the whole, he repeated, the whole of the Free State will be at court next Monday to support “their president”.  Oh, and don’t think that  Accused No 1 would miss an opportunity to work-up the crowd either. What he had to tell them was just so predictable……he played the victim again.

What is very interesting indeed is that a small portion of the crowd actually booed the speakers including JZ and the ANC wants them identified and punished(?).

Monday coming should be interesting.

Tuesday saw me in Town to meet with Dennis, that character of note, and some of his usual suspects from Paul and Henry to Robin and David, as we sat around the lunch table, to listen to Athol Williams at the Cape Town Press Club. Williams is quite something. He grew up in the Cape Town “Coloured” suburb of Mitchell’s Plain and has 5 Master’s degrees, from some of the very top universities in the world and is well-known locally for his testimony at the Zondo Commission, where he testified about his whistle-blowing. He is also a recognised writer, a poet, and a speaker and he gave up an R11 million p/a job at the American management consultancy firm, Bain, where he was employed, to spill the beans on how Bain assisted with our State Capture. He told us how Bain had met with JZ (the then President on at least 20 occasions!……why?) and not only did he discuss their nefarious dealings with JZ and how they helped to change the working of State enterprises and especially SARS (our Revenue Services) but he also exposed his whistle-blowing at UCT, after experiencing what was going on there after having been appointed as a Senior lecturer at the Graduate Business School.

The world champion had been advised that she was amongst the first of the locals that would be vaccinated against Covid and as I had left early for the city she was getting ready to go to the vaccination site, not far from our home, at our local State hospital, to be there in good time. I had already been to an arranged meeting and was back at Kelvin in Newlands where I was to meet Dennis and his “chjoms” when I got a call from Esther to say the whole vaccinating experience was a shambles. They were told by SMS that the process would be done between 10.00 —12.00 but when she got there just a little earlier it was chaos.Those advised for the “first” of the inoculations were seniors or those with underlying health conditions. There was a line for-ever outside the hospital of mostly old frail people and the vaccines hadn’t arrived and eventually they were all told to come back in the afternoon. She was also told to bring her husband even-though he had not yet received his government vaccination number by SMS. I was sceptical but rushed back to get to the hospital by 3.00 and the line of senior citizens again just stretched for-ever. Apparently they want to do couples together so I also got my jab, making the whole thing worthwhile. We will have our second jab on June, 8.

(A word of advise, take a pen with you, there is a form to fill out)

You can see from this Rico cartoon that, at long last, the vaccination roll-out has begun.

There is, understandably, huge criticism of the Government’s roll out. We are far far behind, and the kick-off has gone very slowly indeed. This is Rico’s view of the situation, taken from Business Maverick:

Like every week, the Zondo Commission has delivered evidence that is embarrassing to the Government. Executives of SOEs who have given evidence under oath have been shown to be liars. Why are you not surprised?

The Commission comes to an end pretty soon and then?

Probably not very much because the NPA (Prosecuting Authority) just does not have the resources to prosecute all the rogues.

Iqbal Survé is in more trouble. Much more trouble. He owes hundreds of millions of Rands to the PIC (the Government fund that controls State pensions) in arrear payments & interest and they want their money back.

They are suing him and his Co.s and that is just for the overdue amounts. What they really want back is the irregularly granted R4.3 billion! that they loaned him.   They are again dragging him to court and like his hero, Accused No 1, I am sure he will whip-up lots of excuses why he shouldn’t pay back the money. One of the excuses that he regularly sprouts is that his Co.s are targeted because they are black owned. His mantra is that no white owned co.s are being called to repay loans!!  That is his standard excuse for not paying. He plays the victim. I wonder where he learnt that?

Survé has apparently bought lots of fancy apartments in The Waterfront and the market has retreated with Covid, so he really needs excuses for why he shouldn’t be paying his debt, as he agreed he would. His newspaper empire is collapsing with the disastrous staff policy employed. All the experienced and wonderful journalists were fired when he took over and replaced with pathetic nobodies. The standard of his newspapers is deplorable. This is Zapiro’s take on how Survé gets his news: Those fellows shown are his top staff-members gathering the dirt from the ANC to spread about.

Helen Zille’s book, #Stay Woke, Go broke, has received very mixed revues. I really enjoyed (and totally agreed) with what David Bullard had to write on ‘Wokeness’ and her book yesterday in Politicsweb. Bullard really is a gifted writer and almost everything he writes is a treat to read. For those of you who wish to read his views click on this link:

Then also yesterday Richard Poplak in the Dailey Maverick came out with a very long review. He doesn’t like the book or Helen Zille.

Power outages have returned. Without much notice lights went off on Sunday evening and stayed on-and-off through Tuesday evening. It’s controlled and is usually off for a little more that two hours at a time, but it is a pain. Eskom have sort of caught up and have indicated from now, through winter, most of the outages will be limited to the night times.

Moody’s have again warned that SA is heading for economic trouble. You wouldn’t say so if you saw how the Rand is maintaining it’s recently found strength; but they are not impressed. High Government debt and very weak growth prospects together with the unacceptably high unemployment keep SA at a negative outlook situation. The on-going battle between the public sector trade Unions and the Government further exacerbate the situation.

It should be obvious that I enjoy coffee catch-ups very much. I try to meet someone interesting every week and usually just sit for an hour or a little more and just chat. This week I caught up with Johan, a local, whom I hadn’t seen for a long while. We go back a long time, to our Stellenbosch days and it was so good having the coach (Clive) with us this time to share the natter.

The city of Cape Town has been declared as the official winner of two categories in the global 2021 City Nature Challenge, where over 150 cities participate.

I really am at a loss as to where we are with our cricket. The fight between the two/ three sides —the Board, the Min of Sport, the players—continues. It has been going on for ages and every week we hear that a resolution is near.

In the meantime a Proteas team has been selected to go to the West Indies and Ireland for tours that are warm-ups for the World Cup T20 competition next year.

The two big games in my narrow sports-vision this weekend were both won. The Stormers (WP) sneaked a 39-37 win against the Lions (Tvl)  in Johannesburg. It was close, very close and the last two minutes saw the visitors sneak-through but Rugby has become ‘crash bang’ and even the high scoring match left little to enthuse over. Too many errors, not enough class.

The coach was with me to watch both games and we both agreed the that football was a better ‘watch’ than the rugby.

Spurs won an important game to keep their hopes of qualifying for European competition next season alive. But then last night Spurs played again and they lost a game they simply had to win. Oh, it’s hard being a Spurs fan.