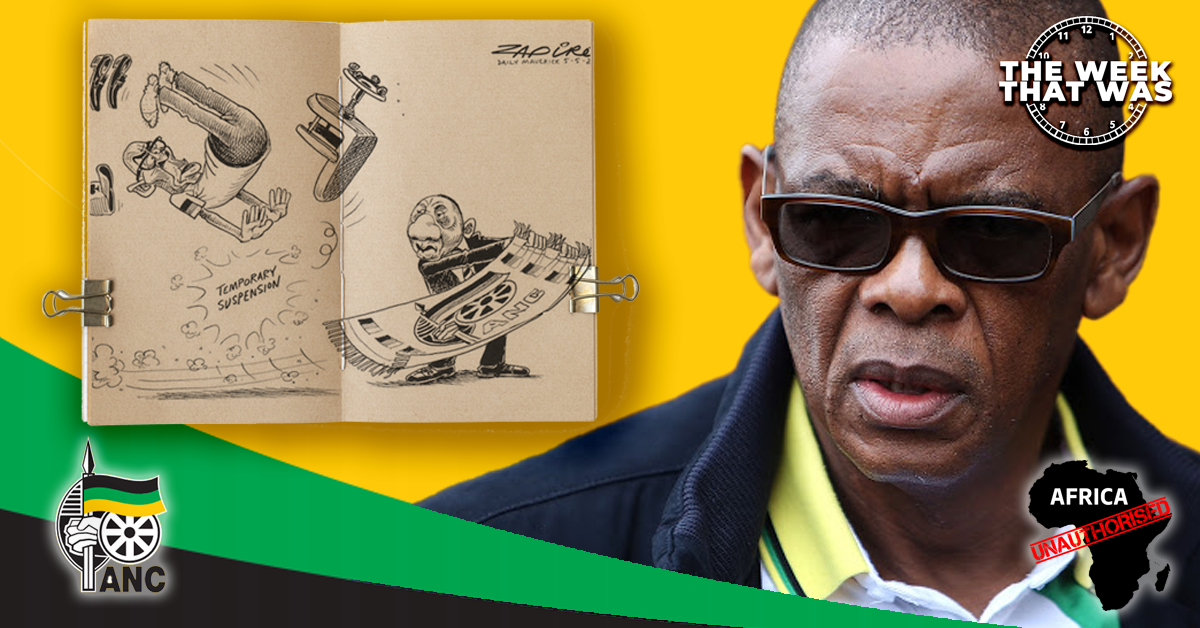 After receiving his letter of suspension last Wednesday, Ace Magashule first appealed his step-aside order and then, almost immediately, sent an identical letter of suspension to Cyril Ramaphosa, without any authority or any Party process at all, suspending CR as Chairman of the ANC. You will not be surprised to hear that Iqbal Survé’s IOL newspapers carried that story and promoted every word leaked— only to them— that Ramaphosa was history.

The ANC had called a NEC ( National Executive Committee) meeting, the highest decision-making body between Party Conferences, for the weekend and Ace attended…… Except he had been suspended. Well, as the virtual meeting started on Zoom —the meeting was first scheduled to be held at a hotel in Pretoria—it descended into a shouting match with two sides aggressively gunning for each other.

Magashule, charged with corruption and out on bail, was suspended as Secretary General of the Party after due process. When he refused to step aside he was referred to the Integrity Committee of the ANC to explain his position after his refusing the Party’s decision ….. That committee decided to accept the step aside order as being appropriate. But still Ace stood his ground.  Then he attended the weekend meeting, that he had called while still ostensibly running the organisation from Luthuli House.

After all the shouting, Ace was summarily cut out of the meeting when his speaker was muted (switched off). MP, and ex cabinet member, Adv Bongani Bongo, also charged with corruption and also out on bail, was also muted.

Don’t think they stayed quiet. I could hear the reverberations here in Somerset West.

On Sunday the ANC branches in  EThekwini (Durban, to you) came out strongly behind Ace and Jacob Zuma but I felt that Ramaphosa is well ahead in this fight.

Then on Monday, unscheduled, Cyril addressed the Nation. It had nothing to do with Covid and everything to do with Ace. Magashule was told, in no uncertain terms, that he has brought the Party into disrepute and was told to apologise within 48 hours in writing, not only to the ANC but also to the whole country or face………..expulsion.

The clock is ticking and whatever Ace chooses to do he is the loser.

Did you know that Cyril had a backbone?  This is how Zapiro saw the weekend meeting:

From the weekend meeting there were also embarrassing leaks that competed in the news with the goings-on about Ace. The ANC treasurer, Paul Mashatile, was heard talking to a colleague and telling him that the Party must cut it’s staff by 50%. The ANC is out of money and it owes tax.

Talking of being out of cash….SA has no money and one of the things on the agenda of the weekend NEC meeting was the pressure the trade unions are putting on the Government to pass a 7% wage hike. The Government’s offer is 0%, they have told the Unions they just don’t have the money, and the Unions have declared a dispute and threatened strikes in the Public  sector.

That is the last thing this country needs right now.

The ANC has shown a complete disregard for good governance and must be replaced but the reality is that the opposition Parties are not doing at all well and it actually seems unlikely, though not impossible, that the ANC will split.  The DA is shooting itself in the foot, repeatedly, and the EFF draws mostly young radicals, but few youngsters actually vote at all in elections. 13 million eligible voters did not bother to vote at the last general election.

At the Zondo Commission this week we heard from Lucky Montana, former head of the Railways, how the ANC regularly dipped their hands into the State coffers to advantage their Party. A new law has just been promulgated whereby all donations to political parties over a certain amount will have to be declared. Although this is clearly a good law, it  could actually harm smaller parties much more than the ANC.

We also heard at the Commission of the wholesale theft that blatantly took place, where bags of cash simply disappeared from the State Security Agency and no one even looked for it. The ANC do not deserve to be in government

On Tuesday the corruption trial of those high-up cadres in Gqeberhe (Port Elizabeth to you) who stole R5.9 million—and were on their way to stealing R10milion— at Nelson Mandela’s funeral, was postponed. The funeral was in 2013 and still these cadres are walking around and the stolen money has not been returned. It is tragic that no-one has yet gone to jail for any of the multitude of corruption cases that are written up and exposed. 8 years on and nothing has happened until now. Oh to be a cadre.  The damage they have wrought  to this country is incalculable.

Jacob Zuma makes (bad) news. After being slapped with a personal punitive costs order in a failed attempt to have us tax-payers pay for his legal fees, Accused No 1 lost another set of lawyers who suddenly withdrew their backing and walked out on him ahead of his appeal to the Constitutional Court to reverse that unanimous court judgement.

(I cannot even begin to guess what the total sum of JZ’s legal fees must be.)

This coming Monday, May, 17th,  Accussed No 1 will have his day in court after Stalingrading for 16 years. I am looking forward to this trial where he faces racketeering, corruption, money laundering and theft charges, without lawyers to represent him. They walked out on him weeks ago.

The Cape Town rail service, already severely limited, was brought to a halt this last week due to electrical over-supply. Isn’t that ironic? But the country’s entire rail system is in total dilapidation due mostly to management incompetence and vandalism, with police ineptitude unable to control it. The busy train service to Somerset West hasn’t run for well over a year.

I learned this week that private security firms are four times the size of our police force. Does this surprise you? It doesn’t surprise me.

And yesterday we heard from the Police Minister, reporting in Parliament, that 280,000 cases is the backlog number of matters referred to the Police for investigation. That’s unbelievable!

The Government says it has started with its vaccination roll-out as the 3rd wave looms. Their secrecy and inaction has been cringeworthy and embarrassing. If only the Government would step aside and let private business handle this. Our medical aid firms and pharmacy-chains are world class.

I don’t know what their ‘imminent roll-out’ actually means in practical terms but I know that we are in the “first group” and we haven’t been vaccinated even once yet. We haven’t even been advised when or where we will be vaccinated.  Rico posted this cartoon showing exactly where Africa is in the world with vaccination roll-out. And you thought SA was different to the rest of Africa?

The Rand is strengthening daily, yesterday breaking ground it hasn’t seen since Jan 2020 and news of the economy regaining lost ground is good news indeed. Companies are spending on infrastructure and on Friday Moody’s skipped re-rating several countries including SA, Denmark and Italy.

Add to that the manufacturing sector showed a noticeable uptick in production in March, its biggest monthly increase in more than two years.

Also assisting the Rand’s recovery has been the booming commodity prices. Long may it last!

Cape Town is fast becoming Africa’s tech hub. Google’s R2.2 billion underground fibre cable will be connected next month and that will assist our city in becoming Africa’s tech capital. Already the Cape Town-Stellenbosch corridor houses 450 tech firms that employs more than 40,000. Remember, I mentioned last week that Amazon is building a huge complex in Observatory that will service all of their Africa business.

Some more good news. Cape Town International airport recorded its highest traffic volume in almost a year last month. Slowly tourism is returning and I am looking forward to telling my stories to overseas visitors again. My first tours in well over a year are scheduled for later this month.

I was in the City on Tuesday and used that opportunity to have a coffee catch-up with big John, whom I haven’t seen for a mighty long time. John, runs a highly successful, well established property-management Co in the centre of Town and is a keen sportsman who played at lock for Hamilton’s for years. We used to pass each other on the squash court in the good old days when our age still allowed robust competition; he for Vikings, me for Matie Old Boys. He always played a league or so higher than I did.

On Tuesday we met at one of those new delightful coffee shops in Bree St and talked business, we talked sport, we hardly mentioned politics. It is so nice catching up.

One of best after-dinner speakers I have heard in a long time is Trevor Quirk, the well-known and highly revered sports commentator. He spoke at Probus (the club for senior professionals and retired businessmen) at the lovely Clovelly golf club, where I hadn’t been for years. I was invited by Paul for lunch and it was excellent.

Trevor told us stories, mostly cricket stories. His stories were new to us and he never once stumbled or looked at a note. At times he had us in stitches.

What an accomplished speaker and what a lovely day I had with Paul and his pals!

Mark my words, the world has a new up and coming top golfer and he is the 21 year-old Garrick Higgo from Stellenbosch. He has local competition from another 21 year-old, Wilco Nienaber. This past weekend they both won big tournaments. Higgo won his second European competition in three weeks (by 7 shots and ending 27-under!), while Nienaber held off stiff competition from Europe at Fancourt. They are both playing superb golf and are definitely worth watching.

The team has been announced for British & Irish Lions who are, thankfully, coming to SA, after all, for their planned rugby tour. In preparation for the tough series ahead the Springboks have organised two tests against Georgia.

The weekend team sport results weren’t very good. The coach, Clive, with whom I walk every single morning very early for at least an hour, and I had little to smile about sitting on our couch. The WP Stormers lost narrowly to the Bulls in a game they could have won and Tottenham were outplayed by Leeds and lost to a team that simply outplayed them.

But then, you know, it’s hard being a Spurs fan.