The Fall of General Smuts 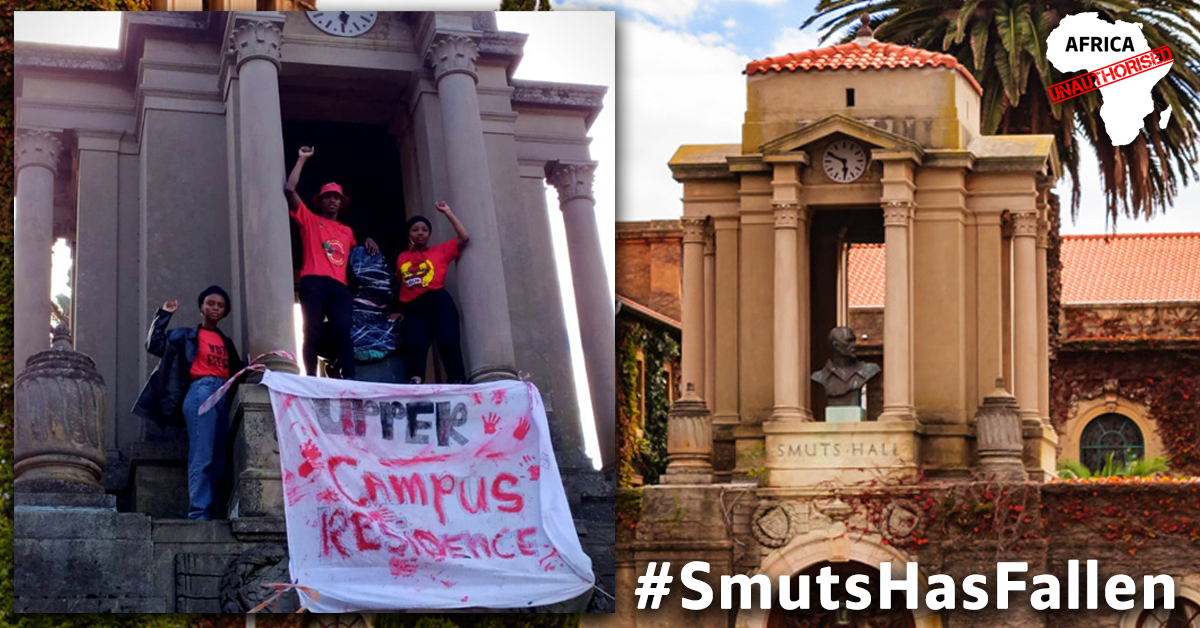 So consistently troubling is the news that reaches us daily, both home and abroad, I have reached the sorry stage where I am too scared to look. I broke from this self-imposed regimen yesterday to look at the photos and read the reports on what was happening at UCT’s Smuts Hall. I felt a sense of duty; both my father and I were privileged to have been residents there and both of us came away having benefitted greatly from that experience. It was a mistake. I read of and saw the clips showing the energy and apparent joy exhibited by those who defaced and removed General Smut’s bust. This was profoundly disturbing and distressing and I regretted my decision to avail myself of this information.

Overwhelmed by a sense of hopelessness I sought solace in thinking maybe this was a time for pity and not anger; ‘.. forgive them for they know not what they do’? I could not help but wish these people showed the same spirit and determination in deploying their time and ability in the quest to improve upon what was achieved in the past, rather than break it. Unfortunately, this is an approach to the past which is not confined to this country, it is happening in America, the UK and Europe where the Black Lives Matter movement is wreaking havoc while offering little of substance as a better alternative.

In an earlier era, General Smuts was considered one of the great men of the world. Having fought ferociously against the British in the Boer War, he threw his, and his country’s weight behind his former foes in the fight to make the world a better place. At considerable political risk, he played a major role in forging the unity of diverse groups required to establish the Union that set South Africa on the path to being a prosperous First World country. While he believed that future success would best be achieved under white leadership, he never, to the best of my knowledge, sought to harm, let alone kill his black compatriots.  In fact, the black population grew rapidly during his tenure and standards of living improved throughout all racial groups. Ironically, Chaka Zulu, a South African and African icon with an international airport named after him, is thought to have slaughtered up to one million black people while spreading a reign of terror throughout his domain – if he had been white he would be remembered as one of the greatest mass murderers in history.  When Hitler challenged the world, it was Smuts, in the face of much resistance from some Afrikaner people whose memories of British atrocities during the Boer War endured, who led the country to war again. Thanks in part, to that decision Nazism was defeated. Had Hitler prevailed, it is doubtful the group who removed his bust would have been free to perform this task. Hitler had no place in his plans for black Africans to be much more than chattels, let alone heads of state. Unlike the leaders of today, supported by the majority, Smuts, a humble man who lived modestly, was never accused of using high office for self-enrichment. None of these facts seem to matter to the mob.

For someone who has lived his life in various countries in Africa, I feel I have, for most of that time, been witness to wanton destruction. Under various guises ranging from anti-colonialism to affirmative-action to land-reform, I have seen systems, facilities and infrastructures needlessly destroyed leading to the impoverishment and early death of millions, along with massive damage to the environment.

Against this backdrop, I, and many others, hoped South Africa would reverse the trend. Watching General Smut’s bust being rudely removed from the portal at the old residence, I knew all our hopes are dashed.

It seems the only time people in authority act decisively and effectively is when they seek to break what was once functional and beneficial to communities and the country. What has just happened to Smuts is symbolic of what similar-minded people have done to painstakingly built structures such as the country’s road, rail and port systems, South African Airways and Eskom to name but a few.

History will show that in the years when the residence was known as Smuts Hall, tens of thousands of students of all races attended a world-class educational institution. Most left having special skills and prepared for a world they went in to with confidence and the alumni have contributed massively over the decades to making their country and the world a better place. As the university moves quickly to dispense with established traditions and standards of excellence while appearing to have little better to offer in the wake of this process this era is apparently now over.  This trashing of Smuts’ bust is a microcosmic of the capacity of post-colonial African administrations for wrecking its legacy of development and civilisation and their failure to replace the ruins thus created with a better alternative.

I know I am in a minority, but I firmly believe General Smuts wanted South Africa to be the best it could be, and he wanted a world bereft of violence and division.  The grim reality is of a Marxist-inspired, de-civilising process of wanton destruction and desecration with no vision to build a better future for all on the foundations of the successes and failures of the past.  As George Orwell observed in his terrifyingly prescient novel, 1984:

If he was looking down from his portal at what is happening in the country he loved, maybe those who have succeeded in his removal from public view have done him a favour and spared him the sadness of watching his dream of a prosperous and united country being torn asunder.

17 thoughts on “The Fall of General Smuts”