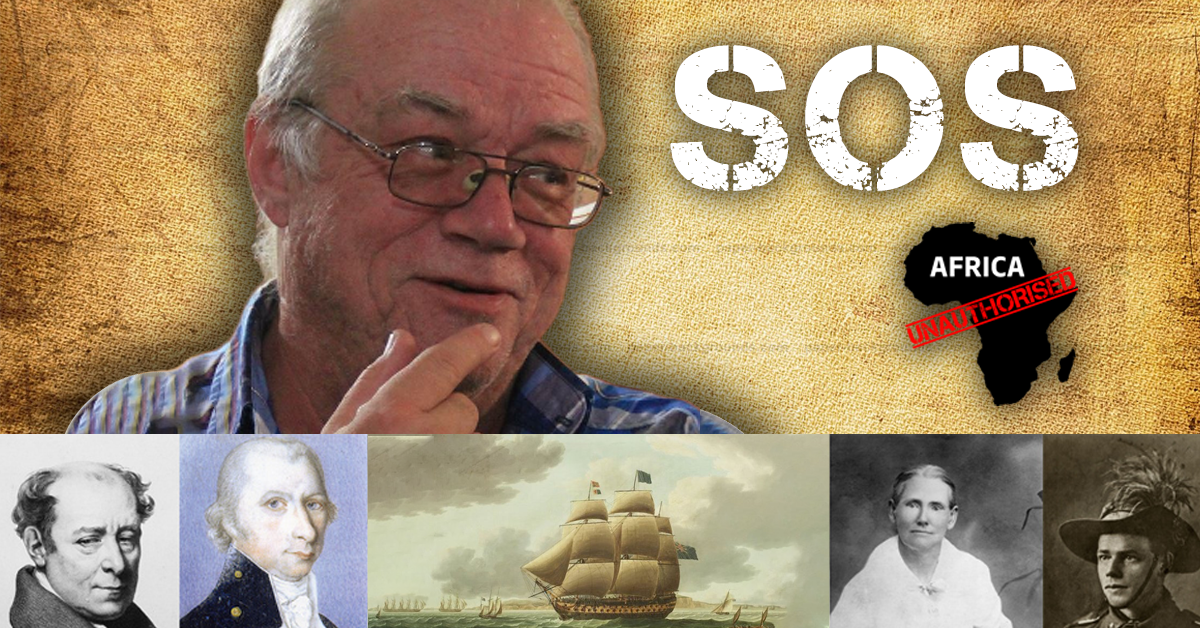 Which means all seven of you that from time to time peruse this, in my humble opinion, column of fantastically interesting historical gems.

I do enjoy history, as you may have noticed, and on the odd occasion do delve into my own family and history thereof, hoping of course that no skeleton falls out of the cupboard too close to my generation. A good example is if someone asks me if the murderer John Bloggs is my father, and he is, I would um and ah and oo and mumble incoherently. Embarrassment would be an understatement. If John Bloggs was my grandfaurdererther the reply would be a polite yes with a look that would cease any further queries. However, if said Bloggs was my great grandfather I would state that yes indeed, he is my ancestor and would find the murder and murderer a matter of great interest and discussion. In other words the further away the deed, the more interesting it is and the more detailed becomes the reply.

The following story is about one of my ancestors. I had commented on social media that I had just finished reading a book about the Indian Mutiny, and how I had enjoyed it. It is not a skeleton out the cupboard, but rather about a man who became quiet well-known at the time. After his untimely death of course.

My cuz in New Zealand queried if I knew of my family involvement in said mutiny. Now I knew that none of my family were Indian, nor that any had even lived on the sub-continent so I did some more research on what he subsequently sent me.

Entertaining stuff indeed. I shall try and keep the intricate details such as fourth cousin seven times removed on my grandmother’s side to a bare minimum. It shall be very simplified so that even I can understand what is going on.

It all goes back to two brothers. I am sure they had a father and mother and sisters and brothers and other generations before them but we shall start with just these two brothers – Sir Robert Seppings (1767 – 1840) and Lt John Milligen Seppings (1770 – 1826). They had both been adopted by their uncle, one Captain John Milligen.

My line of descent is from Lt John Milligen Seppings.

The important link here is Augusta Mary Seppings, one of 11 children born to Lt John Milligen Seppings and his wife Ann, nee Lockyer. (Ann’s maiden surname incidentally explains the many descendants over several generations who have had Lockyer or Locquar as their middle name).

Augusta Mary Seppings is a 1st cousin to John Milligen Seppings (1798 – 1863), who is a son of Sir Robert Seppings, the elder of the two brothers.

This particular John Milligen Seppings married a Marianne Matthews, the union producing three children, two boys and one girl. The girl remained unmarried as did one boy who was an invalid. This left the one boy, Edward James Seppings.

This be the distant hero! The very same Captain Edward James Seppings who was executed during the Indian Mutiny in 1857. Therefore Augusta Mary Seppings 1st cousin’s son. He was born in India on 26 May 1826 and in circa 1845 joined the Indian army. At the time of the mutiny he was 31 years old and was a Captain in the 2nd Regiment of Cavalry based in Cawnpore, and believed to be a pastor/padre.

Edward was married to Jessie nee Turnbull and they had three sons, John James 5 years old, Edward Matthew 3 years old, and a baby recently born and name not known.

The Indian troop mutiny in Cawnpore began on 4 June 1857.

I now take words from other documents:

“The most horrific of the many events of the Indian Mutiny was the massacre of the British garrison at Cawnpore. It gave rise to the expression ‘Remember Cawnpore!’ to justify the actions of the British forces in putting down the Mutiny. When the Indian troops mutinied in the town on 4th June 1857 there were about 300 British soldiers with around 500 associated family members. With Seppings were his wife Jessie and three infant sons. Between the 6th and 27th June the British were besieged in a small indefensible group of buildings outside Cawnpore. The lack of food, water and the heat at the height of the Indian summer took a dreadful toll on the women and children. In the end the survivors negotiated safe passage down the Ganges river. As the force staggered into the boats on the river, the mutineers opened fire from both banks. Only Seppings’ boat escaped but both he and his wife were wounded. Their boat was recaptured and the prisoners returned to Cawnpore with the men separated. On the 27th of June, Captain Seppings read prayers to the others before they shook hands and faced the firing squad. Seppings’ family and the other women and children were taken to the Bibigarth, or House of the Ladies, to join the 200 or so who survived the massacre on the boats. After 3 weeks in horrendous conditions, the women and children were literally butchered and thrown down a well, as the relief force approached. The outrage at the discovery of the events at Cawnpore sent shock waves around the Empire.”

This massacre of the women and children took place on 15 July 1857.

Two accounts follow, one on the death of Captain Seppings, and the other, the death of the women and children.

“There were brought back,” says the man, “sixty Sahibs, twenty-five Mem Sahibs, and four children. The Nana ordered the Sahibs to be separated from the Mem Sahibs, and shot by the First Bengal Native Infantry. But they said, ‘We will not shoot Wheeler Sahib, who has made our regiment’s name great, and whose son is our Quarter-master. Neither will we kill the Sahib people. Put them in prison.’ Then said the Nadiree regiment: ‘What word is this? Put them in prison? We will kill the males.’ So the Sahibs were seated on the ground: and two companies of the Nadiree regiment stood with their muskets, ready to fire. Then said one of the Mem Sahibs, the doctor’s wife: (What doctor? How should I know?) ‘I will not leave my husband. If we must die, I will die with him.’ So she ran, and sat down behind her husband, clasping him round the waist. Directly she said this, the other Mem Sahibs said: ‘We also will die with our husbands.’ And they all sat down, each by her husband. Then their husbands said: ‘Go back;’ but they would not. Whereupon the Nana ordered his soldiers; and they, going in, pulled them away forcibly. But they could not pull away the doctor’s wife, who there remained. Then the Padre called out to the Nana, and requested leave to read prayers before they died.” (This Padre was Captain Seppings, with his broken arm. The doctor’s wife, good soul, is known to have been Mrs. Boyes.) “The Nana granted it, and the Padre’s hands were loosened so far as to enable him to take a small book from his pocket, with which he read. But all this time one of the Sahibs, who was shot in the arm, kept crying out to the sepoys: ‘If you mean to kill us, why don’t you set about it quickly and have the work done?'” Poor impatient Sahib! Making the responses in his passionate way! “After the Padre had read a few prayers, he shut the book, and the Sahibs shook hands all round. Then the sepoys fired. One Sahib rolled one way, one another, as they sat. But they were not dead: only wounded. So they went in and finished them off with swords.”

And the massacre of the women and children in the building near the well:

“The sepoys were bidden to fall on. Half-a-dozen among them advanced, and discharged their muskets through the windows at the ceiling of the apartments. Thereupon the five men entered. It was the short gloaming of Hindostan:—the hour when ladies take their evening drive. She who had accosted the officer was standing in the doorway. With her were the native doctor, and two Hindoo menials. That much of the business might be seen from the verandah, but all else was concealed amidst the interior gloom. Shrieks and scuffling acquainted those without that the journeymen were earning their hire. Survur Khan soon emerged with his sword broken off at the hilt. He procured another from the Nana’s house, and a few minutes after appeared again on the same errand. The third blade was of better temper; or perhaps the thick of the work was already over. By the time darkness had closed in, the men came forth and locked up the house for the night. Then the screams ceased: but the groans lasted till morning.

“The sun rose as usual. When he had been up nearly three hours the five repaired to the scene of their labours over-night. They were attended by a few sweepers, who proceeded to transfer the contents of the house to a dry well situated behind some trees which grew hard by.

“The bodies,” says one who was present throughout, “were dragged out, most of them by the hair of the head. Those who had clothes worth taking were stripped. Some of the women were alive. I cannot say how many: but three could speak. They prayed for the sake of God that an end might be put to their sufferings. I remarked one very stout woman, an half-caste, who was severely wounded in both arms, who entreated to be killed. She and two or three others were placed against the bank of the cut by which bullocks go down in drawing water. The dead were first thrown in. Yes: there was a great crowd looking on: they were standing along the walls of the compound. They were principally city people and villagers. Yes: there were also sepoys. Three boys were alive. They were fair children. The eldest, I think, must have been six or seven, and the youngest five years. They were running round the well (where else could they go to?) and there was none to save them. No; none said a word, or tried to save them.”

“At length the smallest of them made an infantile attempt to get away. The little thing had been frightened past bearing by the murder of one of the surviving ladies. He thus attracted the observation of a native, who flung him and his companions down the well. One deponent is of opinion that the man first took the trouble to kill the children. Others think not. The corpses of the gentlemen must have been committed to the same receptacle: for a townsman who looked over the brink fancied that there was “a Sahib uppermost.”

This is the history of what took place at Cawnpore, between four in the afternoon of one day and nine in the morning of another, almost under the shadow of the church-tower, and within call of the Theatre, the Assembly Rooms, and the Masonic Lodge. Long before noon on the sixteenth July there remained no living European within the circuit of the station.”

I think I should stop there.