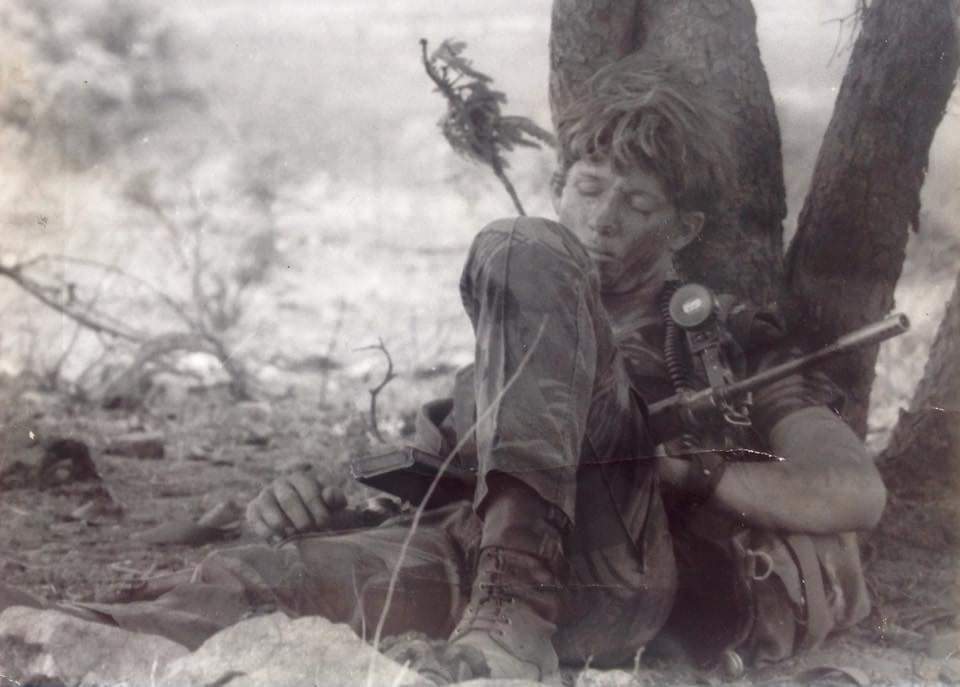 On Wednesday this week, a handful of old soldiers and friends gathered to pay our respects to Russell Phillips who died suddenly last week. Russell was the recipient of the Silver Cross of Rhodesia for gallantry and I had the privilege of saying a few words about this extraordinary which caused me to reflect.

In September 1977 he was the Lance-Corporal in charge of a section of four men sweeping a rocky outcrop in search of the enemy when an officer pursued a ZANLA (Zimbabwe African National Liberation Army) guerrilla into a cave. On hearing firing Russell ran to investigate only to discover that the officer had not re-emerged. Suspecting he was wounded within he crawled inside to find the man had indeed been hit and was unable to move. Russell and a fellow soldier, encumbered by their rifles, failed to dislodge the injured man from a cleft in the rocks and decided to withdraw under fire from additional guerrillas hidden inside. Undaunted, Russell discarded his rifle and re-entered armed only with a 9 mm pistol with which he then engaged the enemy machine-gunners at a range of less than five metres killing one before running out of ammunition and having to withdraw to re-load. He immediately re-entered and re-engaged the enemy, killing another, while moving to a position closer to the incoming fire so a medic could come behind him and retrieve the incapacitated officer. With the wounded man removed, Russell then advanced further into the cave and engaged the enemy with grenades killing one and wounding another. Sadly, the officer died of his wounds. Russell fought on through countless contacts over three long years with Support Commando of the RLI (Rhodesian Light Infantry), until the cease-fire was called.

With the world presently engaged in an anti-white frenzy, I cast my mind back to our time of war and reminded myself, for my generation, this sentiment is nothing new. In fact, when Russell was performing his heroics, he was the very epitome of the sort of person the world loved to loathe. As a frontline, airborne soldier, in the eyes of the world, he was considered a ‘racist rebel’ defending an ‘illegal settler regime’ against gallant ‘Freedom Fighters’  struggling to ‘liberate’ their people from the shackles of ‘brutal colonial rule’. This view was embraced by virtually every government, religious order and international organisation in the world, galvanizing the international community into concerted and cohesive actions that eventually succeeded in bringing Robert Mugabe to power. Russell’s guns, along with all his fellow soldiers, were silenced and liberals around the globe were jubilant.

What none of them ever cared to consider, was Russell and most of those he fought with, was never a racist, nor was he fighting for racial dominance; he had seen the enemy for what he was, not the way a deluded world wanted to see him, and when called to meet the challenge, he responded with ferocity and fearlessness. He believed, because he had seen the enemy at work in the field, unlike his myriad detractors, that defeat would the death-knell of the country he loved, and the black people he sought to defend would be the biggest casualties.

Of course, he was right, and the world was wrong. With his country in the grip of a tyrant he left with sadness, but his anger was directed at the political and associated leaders of the new ruling dispensation and not against any racial group. He well knew the whites and the majority of blacks were essentially victims of a left wing -dominated media and political hierarchy that refused to so much as countenance the presence of Europeans in any positions of power in any country in Africa; it was racism in its purest form but allowable, even encouraged, in the context.

Putting this disappointment behind him, for the rest of his life, as he grew his business through hard work, knowing he had been rendered virtually powerless to prevent the damage wrought by serial misrule throughout the continent, Russell chose to do all he could, as quietly and discreetly as possible to help the poor black people he felt so strong an affection for.

Being a devoted tiger-fisherman, he made a second home for himself at Shackleton’s Camp on the lower Zambezi where he set about helping the impoverished villagers. Seeing the local school was in financial distress he donated books, stationery, computers and money to improve the lot of the children. An elderly local who had lost a leg to a crocodile became Russell’s personal responsibility. The sick in the area could rely on him to send the medicines they could not afford or obtain. He was famous for heavy tipping to the point he attracted criticism; ‘I can afford it,’ he would say, ‘think what a difference it will make to him’. On hearing of a mission station in Burundi in need, a country he had never been to, he donated the funds needed for a vehicle. The same for another mission station in Swaziland. Theresa, his widow insists he helped so many so quietly nobody will ever know all he did.

Saying goodbye to him was a moment of great sadness, tinged with pride coming from the knowledge I could call him a friend. But also a time to remember, that although Russell set a high bar, he was in so many ways typical of most Rhodesians I knew, of his and earlier generations, who so desperately wanted to help build a successful multi-racial country that would have been the pride of Africa, but were denied the chance, simply because we were white. While the world mourns the passing of George Floyd who will be universally remembered as a martyr for a noble cause, only a tiny few, mostly kindred spirits will remember my friend and I can’t help but think Russell cared and did more for black people than George did.

19 thoughts on “Russell Phillips; Brave Soldier With A Big Heart.”