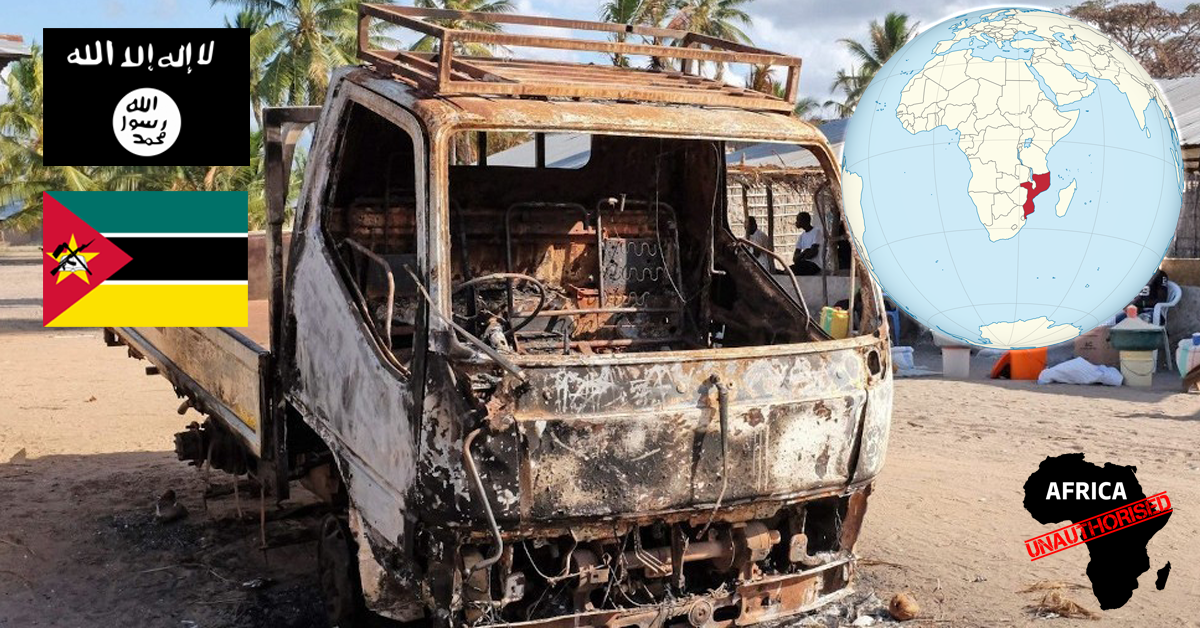 I suppose it is the mindset-madness of the ‘woke world’ we find ourselves in that has come into play recently here in southern Africa, but we are presently witness to a gruesome tragedy playing out around the town of Palma in Cabo Delgado province of northern Mozambique where the killing fields and beaches are littered with the headless corpses and mutilated bodies of innocent civilians. One of the reasons this has happened is because white people, no matter the circumstances, are always wrong.

The conflict has been ongoing for almost four years and the fact that it has spun out of control is much to do with the fact that the impoverished populace have become increasingly resentful of a delinquent Frelimo government operating from a capital nearly 3,000 kms away that only shows its face in the area when there is booty to plunder. Added to this, there are multiple reports of government officials at every level including the security forces, being involved in all the smuggling rackets from heroin, to precious stones and ivory. As a result, the country’s army is a shambles and unfit to confront a well organised, well funded and ruthlessly aggressive insurgency which has morphed into a Jihadist militia known as Al Sunnah wa Jama’ah aiming at leading a secession and the establishment of a Sharia-law caliphate. Reports suggest logistical and tactical support is coming from experienced ISIS operatives and funding from Saudi Arabia and other Arab states.

As is normal, regional neighbours including South Africa and the AU (African Union) have done little other than exacerbate the global warming problem with the huge amount of hot air they have spewed into the atmosphere at their regular talkfests, and proved as much use as an ashtray on a motorbike in providing any answers. The South African National Defence Force, once the most potent military machines on the continent, is broken and probably beyond repair. Its capacity to mount a meaningful intervention is highly questionable.

Against this backdrop, with the situation deteriorating, the Mozambique’s chief of police, reached out last year to former Rhodesian/Zimbabwean Parachute Battalion commander, Colonel Lionel Dyck. Dyck who was, at the time, successfully engaged in anti-poaching operations in the south of the country.  Using ex Rhodesian and South African pilots along with tough young men with little or no military background, their game-scouts and dogs, they were fighting a low-level counter-insurgency war.

“Our chaps were obviously being paid but these are not hired guns wanting to kill people for gain, they were motivated by a burning desire to save the country’s wildlife from annihilation at the hands of hunters hired by ruthless crime syndicates looking to harvest body-parts of value in China. It is open season in Mozambique; they kill everything from pangolins to parrots, to leopard, lion and elephants. While engaged in our anti-poaching role we have stopped the export of millions of dollars worth of rhino horn and curtailed the illegal hunting of these animals. We have also stopped some of the huge Chinese-run logging operations that have been devastating the country’s hardwood forests and ended at least one large illegal charcoal making concern. Unfortunately, none of these actions is possible without resorting to aggressive tactics using skilled men who are tough, resourceful and brave. When the Mozambique government approached me for assistance against the northern insurgency, I took the same tactical blueprint, personnel and equipment into the fray in Cabo Delgado.”

Dyck then went to war with very little, against a well armed enemy. With one helicopter having been shot down and destroyed, he was left with two Gazelle gun-ships flying, two ‘Bathawk’ microlights with front-guns, and an old Allouette armed with a 12.7 DshK and two fixed wing aircraft. With a total compliment of less than 30 men, he has been working with almost no ground-forces and his intelligence gathering capability is very limited.

“Our strike capability has been almost entirely airborne,” he says. “We have attacked enemy camps from the air and we are using aircraft to interdict their supplies which are being moved on land and sea. In this process we suspect we have hit the drug smugglers hard, and this is a billion dollar business that enriches people in a number of countries at every level. I believe we have been successful in cutting down on all the criminal activity, provided protection for civilians living in towns and up to a point, in rural settlements and slowing down the ultimate aim towards a breakaway state. Considering how little we have had to work with I think we have punched way above our weight.”

In this context came the bombshell Amnesty International report released at the beginning of March which included the following:

“According to 53 witnesses who spoke to Amnesty International, DAG operatives have fired machine guns from helicopters and dropped hand grenades indiscriminately into crowds of people, as well as repeatedly fired at civilian infrastructure, including hospitals, schools, and homes.”

“By firing indiscriminately into crowds, attacking civilian infrastructure, and failing to distinguish between military and civilian targets, they have clearly violated international humanitarian law. They must now be held accountable for their actions.”

This was manna from heaven for the international media and received plenty of traction from the South African press which is dominated by white Guardianista wannabees who appear seized more with showing the country’s ruling elite how much they too hate their white countrymen than trying to report fairly based on the facts. There were immediate calls for the local authorities to investigate and prosecute Dyck and his men.

The bottom line was the world could heave a collective sigh of relief; the venerated humanitarians from Amnesty International had identified the villains and lo and behold, just as is always the case, the bad-guys are white, heterosexual, Christians; and even better; they are of Rhodesian and South African provenance. Everyone cheered including the Al Sunnah militants who then limbered up for the attack on Palma which soon went in and the slaughter of the innocents began.

Despite being unwanted and preparing to leave the country, the only people who could come to the rescue of the besieged in Palma were the DAG airmen and despite the opprobrium heaped upon them they responded with selfless alacrity. Often under fire, they flew tirelessly and bravely through the weekend providing the sole lifeline and saved well over 200 people from almost certain death.

Mrs. Meryl Knox, mother of Adrian Nel who was killed concurred with Amnesty International but pointed her finger at different culprits: “Crimes against humanity have been committed here – horrific crimes against humanity.” Referring to the DAG aircrews she said, “Thank goodness for them otherwise we wouldn’t have anyone left there.”

Lionel’s son Max who is on the ground pending the groups exit from the country says the situation remains, “incredibly volatile. However we are still flying. We are incredibly busy. The people we have got to have been trapped in different locations around the town, including lodges and compounds. When we get word of locations, we go and search for them.”

One survivor airlifted from the Amarula Hotel in Palma while it was under attack had this to say: “I was in the middle of this attack. The hotel was completely surrounded, under attack by mortar and machine guns and these guys came in, cleared the perimeter enough to get four chopper loads out, 23 of us, I was on the last chopper out. They had to stop flying due to lack of fuel and daylight. This is bullshit what they are saying about DAG, they are absolute heroes, I owe my life to them. Now they being fired on the 6th April; who is going to replace them? The Mozambique military were bloody awful, they just ran…as they always do.

“If it were not for us,” says Lionel, “I have no doubts hundreds more people would have been murdered. About 500 people have been killed and it need not have happened. I didn’t see any of the Amnesty International people who are so concerned about civilians there!

“Most of what is in the Amnesty International report is totally fabricated. Every action we have taken is documented and recorded with GPS. Every flight has a Mozambique general on board who gives the authorisation to open fire. Even with permission from the generals we have documented situations where our pilots and gunners declined to do so because they were unsure of the targets.

“The AI report was a desk-top study and a hatchet job done for reasons that alarm and trouble me. The fact is we were stopping the massive trade in contraband and drugs; politicians and people in high places were losing revenue; I believe big money came to the fore and we were to be got rid of. The Americans, for reasons best known to themselves, also pressured the Mozambicans to dismiss us. Everyone wants us gone and nobody has any plan to fill the void. All those involved in motivating for the termination of our contracts can take a bow for playing a key role in facilitating the Palma atrocities. God help the people of Cabo; all I can say is we tried our best.”