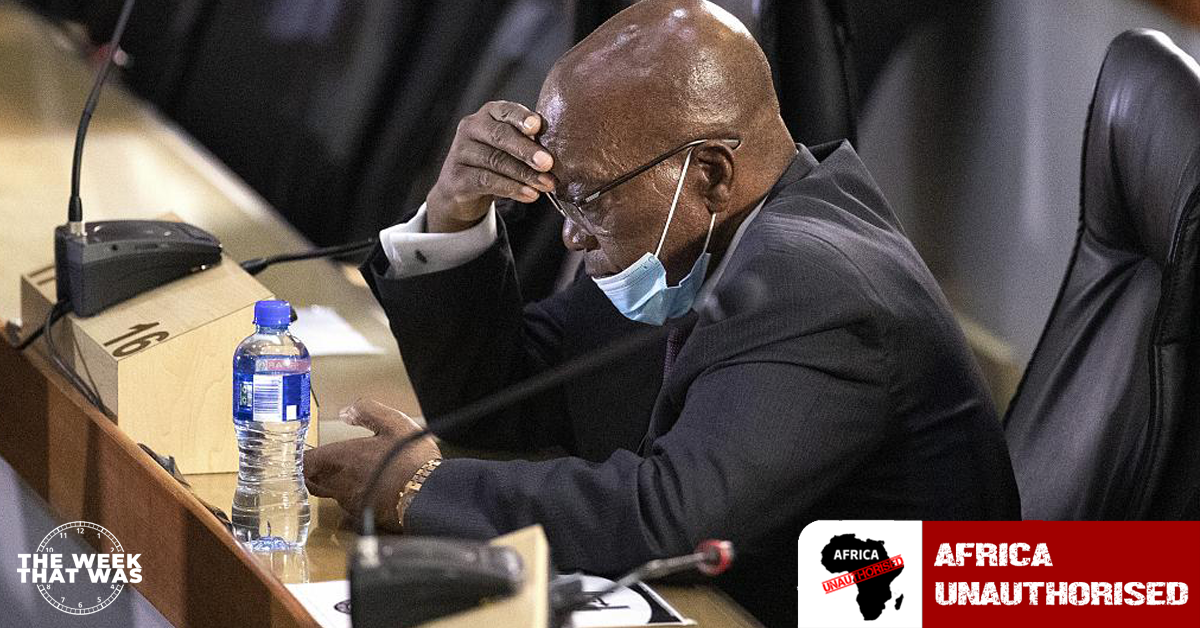 On Tuesday Zuma was back in court and in fact won a leave to appeal from the High Court to appeal the decision that he must go straight back to jail. The judge also allowed that the appeal should consider whether the time he has spent on “medical parole” not be counted towards the time of sentence. That means if he succeeds in his appeal he will virtually come straight out as he goes in to jail.

It really does look as if his Stalingrad-tactics have this time won him a very important reprieve. Still the matter must be decided and he also still has yet another court session to wait out—namely that the court is deciding whether it was legal for him to walk out on the Deputy Chief Justice while being questioned about State Capture.

But he found a judge with sympathy for his age and his condition. Hopefully he will get more time in prison since we are all equal before the law, but now at least he will get to spend Christmas with his family.

Zuma is also in the news because the Financial Mail wants to see his tax returns for the time he was President. There are lots of questions about the Nkandla upgrades that cost us tax payers more than R20 million and the paultry R8 million, in comparison that he had to pay when he got as a bond from VBS Bank. This after Thuli Madonsela exposed the debt of the Nkandla upgrades.  Is he paying his bond back now that the VBS bank is in liquidation? And what about the “financial gifts” that he may have received from the Guptas?  As you can imagine he is fighting this battle fiercely to keep his tax affairs secret whilst trying to stay out of jail.

You may also recall that Jacques Pauw alleges in his book “The President’s Keepers” that Zuma did not present tax records to SARS for seven years.

So watch this space. This cartoon from Dr Jack and Curtis from a few months ago is even more prescient now:

Slowly some of the really big (cadre) wheels are being brought down to earth.

This week the press has been full of Hlaudi Motsoeneng, the former COO of the SABC (SA Broadcasting Corporation)  having to pay back the R11.5 million he awarded himself as a ‘success fee’ for selling the SABC sports programmes to Multichoice / DSTV. The court ruled that he was being very well paid (several million a year) to do just that and so his “bonus” was illegal and illogical and must be repaid. He was given just 7 days after the judgement to pay back the money plus 15.5% interest plus legal costs. And when that’s done he will have to find more money because the SABC (SA Broadcasting Corporation) which he ran wants back the millions that he illegally gave to “lead musicians” in 2016. And then he will have to give back almost R1 million of SABC money that he used without authorisation for his personal legal costs.

When cadres like Motsoeneng, who lied about his academic qualifications, get elevated to run State Owned Enterprises like the SABC are you surprised that they are in the state that they are ?

How different is this story to the poorly qualified Dudu Myeni (a junior school teacher) running SAA into the ground? This is where enormous egos and no experience get elevated into top positions because of their closeness to the ANC and Zuma in particular.

More SOE disasters come to light regularly thanks to the work of the SIU (Special Investigating Unit).

After the CEO of the Railways (PRASA) was fired a few weeks ago we have learnt about the ‘character’ running the finances at this gigantic and important SOE. The allegations against Ms. L. Fosu have still to be proved but it seems she awarded herself salary increases, earned double salaries, does not have verifiable qualifications for the job and employed people into key positions irregularly. Isn’t that what cadres do? Is it any wonder our trains are not running and the important rail system has all but collapsed?

The railways remain a top story here. Dr Willem Sprong, the technical executive railway engineer at GIBB says it will be impossible to rebuild the vandalised infrastructure in less than six years. So much for our Min of Transport’s utterances. Mbalula’s rating by News24 was a generous 3/10.

—See later in this article for the cabinet’s ratings.—

What also makes press at this time of the year— and also in the winter holidays— are the (very unnecessary) deaths of young men going through their initiation processes. Some of the initiation schools are illegal but even at those credited ones, young men wanting to be admitted into the tribe die because of the lack of medical knowledge and the cruel brutality of those in charge of the initiation processes supposed  to make them “men”. Dehydration, infection and malnutrition are the three most common causes of death and already more than 30 young men have died this season.

Mondli Makanya asks in his editorial in City Press this weekend whether Black lives do not Matter (!) in his attack on this barbaric custom still so widely practised and so poorly managed in this country. He is horrified that these young men were murdered by their elders but that the newspapers hardly make much of it. Is it because it happens every year or because Jacob Zuma just hogs the headlines?

It seems as if Cyril is losing control of the ANC. His opposition, the supporters of the ‘RET faction’ aligned to Jacob Zuma and with strong Magashule backing, have won key seats in Limpopo, KwaZulu-Natal and the Eastern Cape over the past few days.

There has been lots and lots of press about the ANC not paying their staff for the last three months. Well, they got a Christmas present this week. They have been paid their October salaries.

Much of the criticism levelled at Cyril is his lack of action. When he took over from JZ it was expected that he would not only get rid of the loungers but also that he would shrink Zuma’s very bloated cabinet. It didn’t happen as expected even though a few changes were made.

News24 rates the cabinet at this time of the year.

To, however, quote Justice Malala in Business Live; Ramaphosa’s lot may be fumbling, but it’s not the same as the thieving bunch we had in charge before. The Zuma administration was a criminal enterprise. This is Rico’s view of the current cabinet from Business Maverick:

This week the DA suffered a blow when the rising star and young Midvaal mayor left the party. He said he was taking a break until February and would then announce what he has decided. It is certain that the other political parties will make strong offers for this competent 34 year old, but it is not certain that he will stay in politics.

Judge Zondo has asked for more time. The (delayed) report was due to be handed to the President at the end of the year but the judge has now asked for a further extension until the end of February.

Andre de Ruyter has managed to pay back R90 billion of Eskom’s debt in the last six months. He has told us not to get too excited yet because they are going to have to spend big in the next six months to keep the lights on. But it is just so good to see the difference that this man is making.

May I take this opportunity to wish you a very Merry Christmas and I trust that the new year will be happy and healthy for you and your family. Let’s hope we overcome the viruses and speedily get back to normal.

We are enjoying having the 2Ms with us enormously. The little guy is a tonic and keeps the world champion busy all day long. What medicine can be better than that?

Cricket SA is in stress. Graeme Smith, Director, and Mark Boucher the national team coach are accused of racism. There has been a preliminary investigation into their conduct and a lot of press has followed. They are not the only two fingered but they are the most important. When you see how many of our (white) stars are leaving here like Marnus Labuschagne (a ton) for Australia and Dawid Malan (80) for England in the latest test match in the current Ashes series Down Under then you can begin to understand what is happerning to our best players.

The cricket Board has indicated that early in the new year a formal hearing into their conduct will be conducted and then Smith and Boucher will be given time to present their side of the story.

The Indian team is here for three test matches and five T20s. Dennis, that character of note has invited me into his box for the Newlands test but apparently no spectators are going to be allowed because of COVID.   Oh dear, that’s sad. The  world has changed.

On Sunday evening the coach was on the couch with me to watch the much anticipated clash between Spurs and Liverpool. Almost all of the games in the Premiership had been cancelled because of COVID (90 players in the Premiership squads are said to be infected) but the Spurs Stadium was packed to the rafters with fans on Sunday afternoon.

And what a game!

The most exciting ever?

Spurs went ahead brilliantly but then found themselves behind and ultimately scored to earn a draw in what might be the best game of football of the season and certainly the most thrilling. It really was top quality football.

Last night, in another tight game Tottenham beat West Ham 2-1 in a Carabao Cup fixture to proceed to the next round.