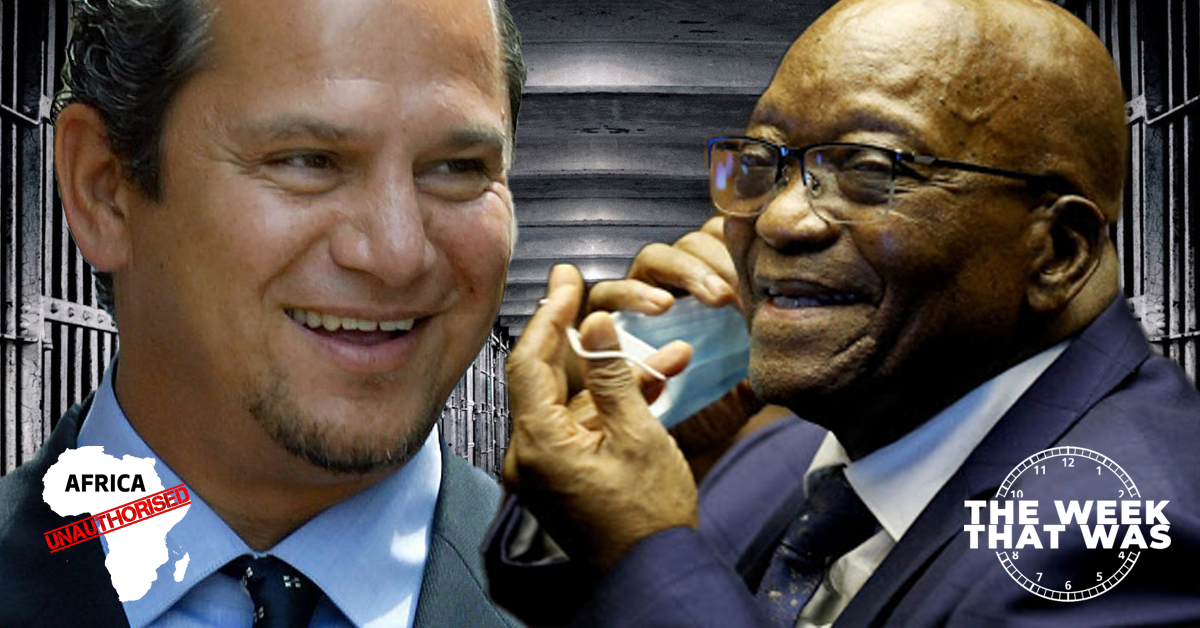 Not for the first time has Jacob Zuma virtually dominated our news this week. Quite unexpectedly he was granted medical parole on a Sunday afternoon, nogal, which probably means that he will never come to court again or ever see the inside of a prison. Usually medical parole is granted only to terminally ill prisoners. The one exception is Shabir Sheik, convicted, after proof having been fully established, of bribing JZ and having been given a 15-year jail sentence. He was released on medical parole more than 12 years ago and can often been seen on the golf courses around Durban striking the little white ball. Was he out of jail because of his closeness to JZ, then the President?

The “get out of jail free” card given to Zuma has left many highly sceptical about this sudden announcement made on Sunday afternoon.

The FW de Klerk Foundation, believe, and they state their reasons, why this parole is completely illegal in terms of our law and they point out that it just shows that some people are more equal than others.

The DA wants to know what Accused No 1’s ailment is, and though it’s normally a private matter, these are quite exceptional circumstances made more so by the fact that JZ was convicted and sentenced to jail months ago and has not spent even one night in a prison cell.

They make the point that when he was convicted, he was walking and talking very normally indeed.

There are very cogent procedures that must be followed (23 of them) before medical parole may be granted. Was this complied with?

Another fact irking many thinking people is that the medical parole was authorised by Zuma’s long-time loyal supporter, Arthur Fraser, just before his term of office as prisons’ Chief Officer comes to an end later this month. Yesterday Fraser said that he had overruled the Parole Board, but he was quite entitled to do so in the circumstances.

This whole episode is shrouded in suspicion and mainly because of the way the State was hollowed out by Zuma —-you are aware of State Capture and what the Zondo Commission is considering, I presume. It was Zuma who put his lackeys into key positions, like Fraser who, it is alleged should have been arrested for grossly misappropriating public funds when he was Zuma’s chief spy at the State Security Agency. But Cyril saved Fraser when he was publicly fingered and moved him into the Prisons Department. Cyril is really such a good ANC guy! Zapiro was again at it, summing up the situation so succinctly with his cartoon in the Daily Maverick yesterday:

The ANC failed to register prospective councillors in 93 wards (357 candidates) for the upcoming municipal elections. In spite of ANC demands that the elections be postponed (because of Covid, they claimed, and not because of their incompetence) the Con Court stuck to the Constitution and declared that the elections must be held by November 1st. That meant that about a third of SA’s municipalities would have had new leadership had the IEC (Independent Electoral Commission) not come to the governing party’s rescue.

The IEC has subsequently, and illogically given the ANC a life-line by now allowing a fresh registration week for voters later this month. That leniency was not allowed the IFP some years ago, but then we know some parties are more equal than others. Not all of our political parties are happy with this ruling, but I guess that democracy demands that voters have a free choice and I believe that the ANC will take a pounding in these elections, anyway. The majority of our towns are in a mess and infrastructure has crumbled. They are almost all governed by the ANC and the ANC has so many factions which are at war with each other that there is just no common purpose. All that the prospective ANC councillors want, it seems, is to get closer to feeding at the trough generously supplied by the hardworking taxpayer.

I learnt early this morning that the DA is taking this ruling by the IEC to court in an urgent application to the highest court in the land to have it overturned. Exciting. Watch this space.

Then the ANC has no money, it has not paid its staff for three months and it, too, like Zuma, is asking for crowd-funding. The staff are tired of waiting for their pay and embarrassingly for the ruling party, they have gone on strike.

On Sunday the Party will address their workers and tell them not only are they crowd-funding but they will also sell off some of their assets to try to right the wage-ship.

It is so very apparent, to most, that the governing party can do nothing right and that is why, especially in the metros, I expect the ANC to do poorly in the upcoming elections. Notwithstanding this Brandan cartoon from the Sunday Times this past weekend, Jesse Duarte, Gen-Sec of the ANC, while Ace Magashule remains suspended, has warned that no one should write off the ANC just because they don’t have money.

A story that has made lots of press this week has been the effort of Duduzane Zuma, the billionaire son of Accused No 1, actively attempting to get himself nominated as a candidate to become leader of the ANC and President of this country. He is taking his campaign seriously and says so on radio, whenever he can, what a good leader he will make.

He has plenty of work to do though to get himself nominated by the branches but with his money he can probably grease enough palms.

It is well-known that Cyril has others in the Party who would like to see change at the top.

Cyril, strap yourself in for a fight.

Almost nothing is as bad as what has happened to our rail services in this country. That squatters remain living on rail-tracks even on the main Cape Town line into the northern suburbs gives you an idea. This week I read of the famous Blue Train ending its journey from Pretoria in Worcester and passengers having to be brought by bus into the city.

Vandalism and theft just goes on and on but a little good news this week in the Western Cape, 26 arrests were made for the blatant destruction of our rail services.

This week, some even better news, if you can call it good news. R4.2 billion held in bank accounts linked to a locomotive supplier have been frozen by the SIU (Special Investigating Unit). Good, it’s taken years but some action at last.

Matshela Koko headed up Eskom 2016 to 2018 and has been highly visible for many years. He it was who helped to run our largest SOE into the ground, while enriching his family. He is a cocky loudmouth who has been brought down to earth by a judgement that has made him pay costs of a 72 year-old kindergarten teacher who tweeted that he was a crook. He sued her for R500,000-00 for defaming him. She offered an apology which he refused to accept and she terminated her Twitter account.

The judge was super critical of Koko not accepting her apology and ordered him to pay the teacher’s costs. Good!

Robin reminded me that Koko was put on suspension and is probably and typically for the ANC still on full pay, so the costs order won’t worry him too much.

A little bit of good news is that the SA economy grew at 1.2% in the 2nd quarter and that was slightly better than expected. But in view of the massive contraction suffered by the SA economy over the past 18 months, that really is not a big story. The Rand has strengthened quite nicely, though. Long may it continue!

Some very good news indeed is that Mercedes Benz are staying…..and investing. The East London plant has just been given a huge financial boost and the assembly of C-Class Mercs will continue here for very many years.

The court this week refused Ayo’s urgent request to interdict FNB from terminating its transactional banking facilities and they must now decide how to go forward.

World-wide pollution is a problem. Even here in Cape Town pollution has, for the first time in 10 years been the reason the 27 kilometre canoe paddle from Muizenberg to Milnerton has had to be cancelled. The mess in Zandvlei and Black River simply makes the race too dangerous.

Rumour has it that SA will be reverting to Stage 2 of the lockdown from next week. Easier retail restrictions that will be especially good for alcohol sales and longer hours at the restaurants are what is expected. Cyril is sure to have another ‘family chat’ soon.

Capetonian, Lloyd Harris (24) did so very well in the American Open tennis championships. He got through to the Quarters in one of the most important competitions in the world for the first time. The world champion and I watched the match last night.

The Proteas were hammered by Sri Lanka in the last of the ODIs and so lost the series 1-2. That’s very disappointing but the T20’s start on Friday and we are hoping for better results.

Most unexpectedly Bafana Bafana beat Ghana for the first time in 7 attempts over the last 5 years. After only drawing with Zimbabwe on their away tour who would have thought?

WP took a pasting from The Bulls in the Semi-final of the Currie Cup, as expected, so the sporting scene was actually a little glum.

There was no Premiership football last weekend.