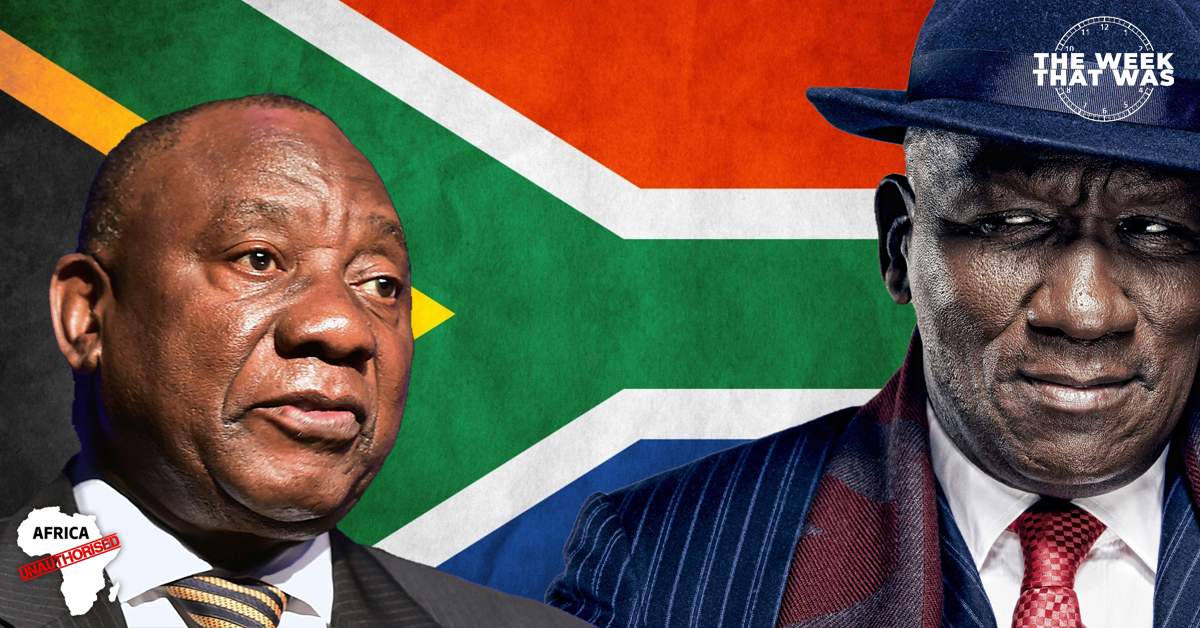 So, after thinking about it and hinting at it and carefully considering his options, Ramaphosa actually made some cabinet changes on Thursday night. It took almost two years and it took one minister to die and two ministers to resign (Health Minister up to his eyeballs in corruption and Finance, where the Minister was a reluctant starter and an independent thinker) to spark Ramaphosa into action. Did the President use the opportunity to shrink the bloated cabinet?  Did he bring in bright new young faces, did he fire anybody for incompetency? did he fire anybody at all?……..don’t be silly.  What he did was simply move the chairs on the Titanic.  He brought his supporters closer and moved others to smaller portfolios, like Lindiwe Sisulu who is now in her 8th cabinet post. Hopefully after all the past failures she will make a success of Tourism, but I am not holding my breath and considering her repeated utterances there are strong chances that she will welcome Cubans, Russians and Palestinians but not Israelis to our shores.

SA is sinking and this shifting of chairs is not going to help much. Instead of firing the grossly unprepared and incompetent Security cluster he simply moved the Ministers around and the clown of a Police Minister remains exactly where he was. Politically that is perfectly understandable since Bheki Cele brings the KZ-N Party branches with him and they are largely Zuma-ites; it has very little to do with competence and Ramaphosa needs his support. To hell with the safety of his ‘fellow South Africans’. We had been expecting much more than this from Cyril, but the Cabinet remains a club, an ANC club that we pay handsomely for.

The ANC is being sharply criticised for promoting the disgraced former Defence Minister, the only Minister to be fired from Cabinet by Ramaphosa last week, to an even better paid job. She is to be our next Speaker in Parliament with the outrageous salary of the Deputy President (who does absolutely nothing for his pay) This just so very clearly illustrates the paucity of talent in the ruling party. It is disheartening. Even worse, it proves beyond any doubt that Ramaphosa puts his party and his position before the interests of the people he is elected to lead.

The most telling move in this reshuffle is that the president has concentrated more power around himself by bringing the Department of State Security (SSA) into the Presidency. All good while someone like CR rules the roost but what happens if someone like Magashule or Duduzane Zuma, who both have aspirations, becomes President?
Anyway those of you old enough to remember the wonderful Spy vs Spy comics and games from the 60’s and 70’s will appreciate this cartoon from Dr Jack & Curtis from the Mail & Guardian this week.

On Tuesday the trial with Zuma standing in the dock as Accused No 1 and with the French Arms Co, Thales, as Accused No 2 was due to get under way…….but you guessed it………a postponement.

Actually the trial itself was not about to start before an application by Zuma that the Chief Prosecutor, Billy Downer SC, be removed.  Zuma claims Downer is biased against him. This objection is preposterous and makes a mockery of the justice system; Downer is there to enforce the law, he believes he has the evidence to prove it in a trial; it his job to be ‘biased’ against the defendant! But, even for this application there has been a delay.  That master of Stalingrad-tactics found himself in hospital, taken from his jail cell over the weekend “for observation” and his lawyers asked for a delay because he is seriously ill. Apparently he is in good spirits and joking but being in jail at his age has taken its toll. Remember his partner in crime, Shabir Shaikh also only did a few days in the slammer before being admitted to hospital where we were told he was gravely ill. From there it was a short hop back on to the golf course.

The court has allowed the State’s request to appoint a doctor to examine JZ and report back to the court on the 20th as to the seriousness of his condition. If he is well enough the trial will now run from the 9th of next month……… but again, I am not holding my breath.

Will he ever go to jail for the longest time? I doubt it. It is quite intriguing, you must admit, to see how this master of these delaying tactics can delay a trial for more than 15 years using absolutely every trick in the book. It tells us there is something wrong with our system and the people who run it but we all know that now.

Ramaphosa is the final witness at the Zondo Commission. Yesterday and today are the last days that Judge Zondo will hear evidence before writing his report. Ramaphosa referred to Sate Capture at the enquiry into whether there was in fact State Capture here. He was in a jovial mood and is personable, but too much is glossed over and simply swept under the carpet. His point is that he stayed in position as Deputy President to calmly do what he could to rectify the rot that was setting in because if he resigned nothing to curb the corruption would happen. Well it looks like he failed miserably.

Ace Magashule was in court yesterday to answer to his (with 15 others) corruption case. He shouts that he has nothing to be worried about, because he is completely innocent and he can’t wait for the trial to be over so that SA can see that he is innocent. The hearing has been postponed to the middle of October.

For those of you feeling generous, I have some advice for you: Don’t lend Iqbal Survé money. He will tell you that he doesn’t need to pay it back since he gave you shares in his almost worthless company, Sagamartha Co. for the loan. So, the SA clothing and textile Union is now going to court to try to recover the almost R300 million that it says Survé owes them.

Survé also got R4.3 billion from the PIC (State Pension fund) that he says he doesn’t owe. They are also preparing a case for that money.

It appears that instead of using all that money to strengthen his newspapers to maintain their quality standards—they are now pathetic shadows of their former selves—he bought luxury apartments in the Waterfront precinct and wasted that money. Just one week ago, power utility Eskom proudly announced that the contentious Medupi coal-fired power plant in Limpopo had finally reached commercial operation status. It took 14 years and R122 billion to get to this position. The 4th largest power station in the world had at last come on-stream, albeit 6 years later than scheduled and with huge cost over-runs. The Government was finally relieved to announce that it was now up to full operational capacity. Then late on Sunday night a mighty explosion at the plant caused a major set-back. Thankfully, it seems that though no one died in the explosion; the cause was simply poor workmanship. Seven workers have been suspended……..but nothing will probably happen to them, it never does at our SOEs.

Fred Mouton, cartoonist for Die Burger, is great. His cartoon on Tuesday in the quality daily says it all.

For those overseas, having lost their Afrikaans: The mechanic says to the Eskom Director: “Sir, We are proud to report that Medupi is up and running and is working like a bomb!”

Some bad news:  For the first time since the current tax brackets were established six years ago, Africa’s most developed economy will see a drop in the number of top earners this fiscal year. Emigration is the cause. Top tax earners are leaving.

South Africa lost 1,900 high net worth individuals – those with wealth of $1 million or more – in 2020, bringing the number to its lowest level in 13 years, according to New World Wealth, which studies wealth in emerging markets. You can only screw people for so long and then ‘you kill the goose..’

On Tuesday my coffee catch-up was unusual. First, because Hannes and I had never met and second because he drinks tea and not coffee.

I forgave him for that as we settled down and discussed his books— he has written seven—and his blog, Africa Unauthorised, where he often adds my weekly newsletter for a very wide audience to read.

Hannes is English speaking having grown up in Rhodesia, now Zimbabwe and his books are often with Rhodesia as background. The one I would like to read first is his book co-written with the famous golfer Nick Price titled ‘Guns, Golf and Glory’ (first published as ‘The 15th Club’) but another, ‘A Handful of Hard Men’, considered the best book ever published about the Rhodesian war, is a must on my reading list.

I look forward to our next catch-up.

Oh, all his books are available on Amazon, and you can see all his titles by going to www.exmotibusmedia.co.za I noticed when I googled that page that Hannes also has several U-tube clips part of a series titled ‘Fighting Men of Rhodesia’ that you can watch. He now lives in Darling and I forgot to ask him if he knows Pieter-Dirk Uys.

We didn’t have a good Olympics. The Sports Minister has described the overall performance of Team SA at the Olympic Games in Tokyo as having been below expectations. SA was expecting somewhere in the region of 13 to 14 medals and we came home with 3. SA with just over 60 million people brought home three medals. Australia with a population of 25 million won 45 medals. Yet our Sports Minister is adamant that there are still too many white faces in the teams, saying that our Olympic team is not representative the demographics of the country. Whose fault is that?!

Now you can see, but he can’t, what politics and BEE does to our sport.

Traditionally medal winners get a financial reward for achieving medals at the Games. In 2016 gold medalists received R500,000-00 and Bronze got R100,000-00 as a reward for performance. Not this year. SA is bust, and SASCOC has no money. Now there is a crowd-funding effort to try to raise money for them.

On the other hand, the rugby!

The third and final test last Saturday. What a game!  Hard, uncompromising, tense to the very final whistle. Close…….unbelievably close. Who does not know that the Springboks won at the very end of the game and so clinched the series?

That the British and Irish Lions even came here was wonderful of them and their administrators. They were not able to travel around to see our spectacular country, to go to the game parks or do so many of the things that normally makes a rugby tour of South Africa such a memorable event. Now they go home and have to isolate for a fortnight. We salute a fabulous team who came so very close to upsetting the World Champions.

For you who did not watch, the magic of Kolbe’s try deep in the second half of the test will be engraved in our memories for ever and Morne Steyn’s penalty at the death to snatch victory just added the icing.

We now start a new series this weekend playing our first of 9 tests in the Rugby Championships. This week we play at Gqeberha (PE to you) against Argentina but with a very different starting 15.

(Please remember that next week I will probably not be sending out my weekly newsletter for a very good reason, I am touring. We will catch-up again in a fortnight.)