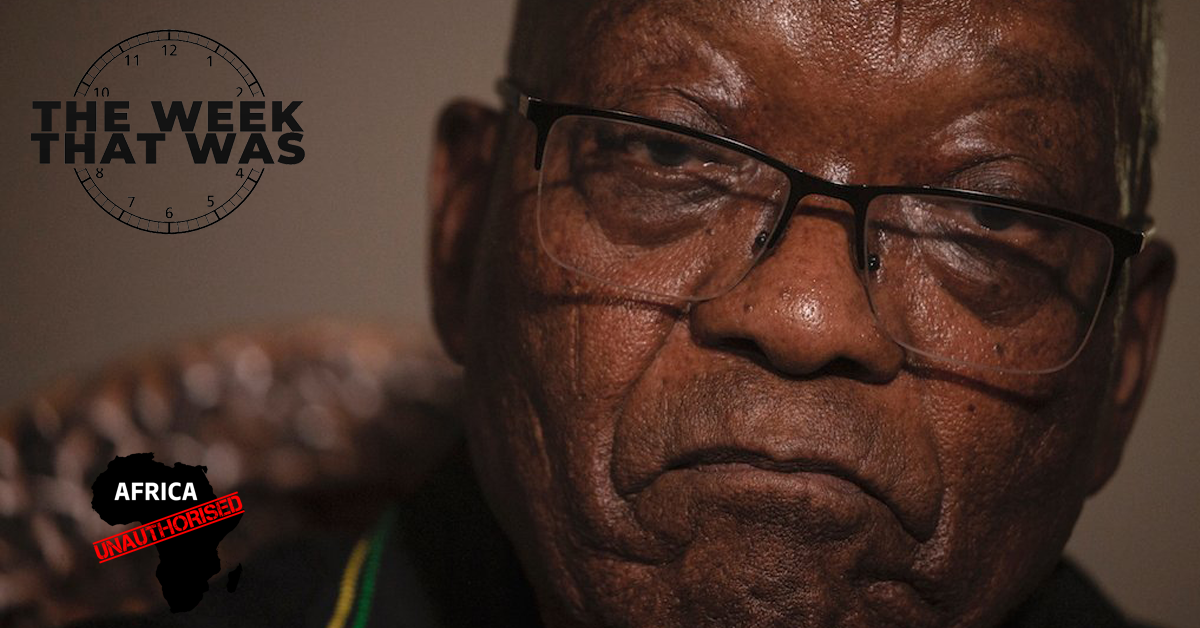 Jacob Zuma is in jail.

But you cannot even begin to believe how tense the last couple have days have been.

Stalingrading tactics to delay the inevitable have never been more definitive since the World War 11, than what has happened in our courts. The absolute master of the art, Jacob Zuma, lead the battle to stay out of prison as ordered by the Constitutional Court for his contempt of refusing to appear at the Zondo Commission.

(And what about his delaying tactics for the 17 years up till now with his corruption case, which still hasn’t been heard?)

Nothing, but nothing has ever been as gripping as the drama that played itself out this past weekend. The stage of theatre was Nkandla, the main actor was Jacob Zuma and his cast consisted of his Advocate, Dali Mpofu—the EFF big shot, Ace Magashule— suspended Gen Secretary of the ANC, disgraced Jimmy Manyi, who is now JZ’s spokesperson and was once the “owner” of the Gupta’s ‘New Age’ newspaper and the perennial liar, Carl Niehaus. The bit-players were the NEC members of the ANC hierarchy sent to Nkandla to observe, consult and report and the live audience were the crowds who defied lockdown laws and congregated illegally to cheer-on their hero. The climax was set for Sunday evening when JZ would address the press.

As the time for Zuma’s address neared the drama heightened and it was regrettable that the police did nothing about the illegal gathering of the many thousands that had gathered—illegally, because of lockdown— which definitely added to the spectacle.

To say it was chaotic would not really be accurate but some reports did call it that. It was reasonably managed, though there was absolutely no social distancing, and again Accused No 1 showed his middle finger to the law when neither he nor most of the crowd bothered even to wear masks.

Will they all be contaminated from this super-spreader event, I wonder? The Delta-variant is worryingly prevalent in KZN.

Zuma thrived. He addressed the crowd twice, first in isiZulu and then later in English.  He was in high spirits, he joked, he laughed, he cried, he attacked the Judiciary, he told the crowd that he was an old sick man who would die if sent to jail because of his medical condition. Ace Magashule addressed the crowd. He is banned from doing that by the ANC.

Tony Yengeni, the convicted ANC NEC member, went to Nkandla to assess the situation and talk with JZ and was seen walking around with a gun, and he too addressed the crowd.

Lindiwe Sisulu, a cabinet minister, also a NEC member and also seconded to Nkandla, reported that there were only about 100 people present and the lockdown restrictions were not breached.

But who can ever believe a word that comes out of her mouth?

Tony Leon in an educated article in The Times on the whole Sunday affair wrote yesterday that Sisulu’s greatest feat was not falling over her impossibly high heel shoes.  Rico, in Tuesday’s Daily Maverick saw it all as a circus:

Yesterday, the clown in the cartoon, Carl Niehaus, was suspended from the ANC for inciting the crowd. He had threatened national insecurity if JZ was arrested and has caused enough division with “his” branch of the ANC’s military veterans association, which has now been disbanded, to be fired. He has not been afforded the opportunity to appeal, but appeal he will, says Niehaus.

On Monday coming, the Constitutional Court has agreed to hear an application by Zuma for a rescission of their judgement in the case where he was sentenced to prison for 15 months for disregarding the law. The case was amplified by the State where a prison sentence was fully justified when it was pointed out how dismissive JZ had been in every respect and how he had been given multiple opportunities to comply with the law, which he so very rudely dismissed. His chance of winning this case for rescission is small but the law must take its course and the Court has deemed it fit that it hears what he has to say.

On Tuesday past, in a lower court, Zuma asked for a stay of his imprisonment until the rescission matter is heard by the Apex Court on Monday. That judgement will be delivered on Friday and the Zuma family thought he had bought another day or two’s freedom but legal opinion soon convinced them that the Con Court’s ruling had not been suspended.

Edward Zuma, one of JZ’s very many sons, was vociferous in his rant that the police would not arrest his father. They would have to kill him first. Last night he arranged four or five bakkies at the entrance gates of Nkandla to block the entrance.

The drama heightened last night. Would the Minister of Police have the guts to arrest his comrade? He and the Police Chief wrote to the Con Court to “ clear up whether to arrest JZ or not” in view of his appeal awaiting judgement on Friday at 11.30. Then late last night, Jacob Zuma delivered himself to jail.

Covid, the vaccination roll-out situation and the news of the rapidly spreading Delta virus have been moved to the middle pages of our newspapers. This is day 469 of our lockdown and we are struggling. Retail is devastated and the government’s vaccination roll-out is getting better but it is not great. Notwithstanding the criticism the government pats itself on the back and keeps telling us how well it is doing. The government does nothing well, so compared to the Airways, the railways, the post office, the municipalities, electricity supply, water supply etc, etc, etc, the roll-out is going very well indeed.

On the weekend we learned that two of the Gupta brothers and their wives had been served with Red Notices (fugitive from justice) by Interpol at the behest of the NPA . Well, that’s what all our newspapers told us. This is unfortunately not yet true but will soon become fact. When this happens it will make it extremely difficult for them to travel internationally. They stand accused of multiple crimes in SA and are extremely unlikely to want to return here from Dubai.

The net is definitely closing in on the brothers who will hopefully be extradited to SA since the UAE  and SA have today inaugurated a bi-lateral extradition agreement. Hopefully Accused No 1 will have some close friends to share jail-time with him.

The Public Protector must be suspended. She deliberately changed the wording of a code to code of conduct to find that Cyril Ramaphosa had violated that code when contesting for the leadership of the ANC in 2017. The appeal judgement was clear that she is dishonest:

“She did what no law authorised her to do”

I have lost count of the number of judgements have gone against her. Her knowledge of law is quite obviously) very limited, but her dishonesty is quite incontrovertible.

What is she doing in such an important position?

Parliament, at the behest of the DA, is currently considering her future.

It’s really time for Ramaphosa to show some backbone and fire her.

There are many reasons to visit Cape Town, but here’s one of the most irresistible – Chinchilla Rooftop Cafe & Bar in Camps Bay.

Golden Arrow have launched the first electric bus service in the country, in Cape Town. The new buses are running between Retreat and the City and is another leg of the company’s “greener energy” project which already incorporates huge solar panels at its headquarters.

We have had one of the wettest weeks I can remember. One of our key dams is overflowing and the average of all our dams is almost touching 90% for those feeding the larger Cape Town region. There will be no water-rationing this summer. What’s more, there is more rain on the way.

On Saturday the filly, Kommetdieding (kom met die ding) won the Durban July, (is it July already?) our most famous horse race in SA on Saturday. The owner is a “Cape Flats” boytjie Ashley Reynolds is the first owner of colour to win the race. There were none of the usual fashion photos in the ‘papers on Sunday because of Covid and because of the lockdown restrictions only the owners and a few of the press were allowed to watch at the Greyville track.

On Friday night, in a warm-up test against Georgia(do they play rugby in Georgia?) the Springboks won 40-9. The test for this weekend has been cancelled because of Covid. The British &Irish Lions got off to a cracking start against our Lions(Gauteng) and whacked them 56-14. That’s a good start to a tour, I’m sure you will agree. Covid is playing havoc with our games and several Springboks have been infected. The squad is in isolation and the whole tour, after just one game, the British & Irish tour of SA in in the balance of being scrapped. The game against the Sharks has been scrapped for this weekend and things don’t look too good, particularly in the Gauteng region where they are currently staying.

Fred Mouton is the long-time cartoonist for Die Burger newspaper. This is his comment from yesterday’s paper on the virus being more dangerous for our rugby Springboks than the touring Lions:

Our cricketers won the series against a very moderate Windies team and some are now talking as if we are world beaters. In my opinion there is still plenty of work to do on this front.

The European football competition, now coming to an end, has been of a particularly high standard. I haven’t watched much but what I have, I have enjoyed.

What makes my family in London very happy is that England are through to final of the European competition after Harry Kane’s goal in extra-time.

PS.
News travels fast. As I was writing this, at 12.20, I received an email from my Academic friend, Susan in Boston congratulating me on Zuma’s arrest.

Then soon after  from Avrim, ex-Windhoek now Switzerland, I was copied in the New York Times article on the whole affair of the arrest.  I can share that with you if you like.

3 thoughts on “The Week That Was”