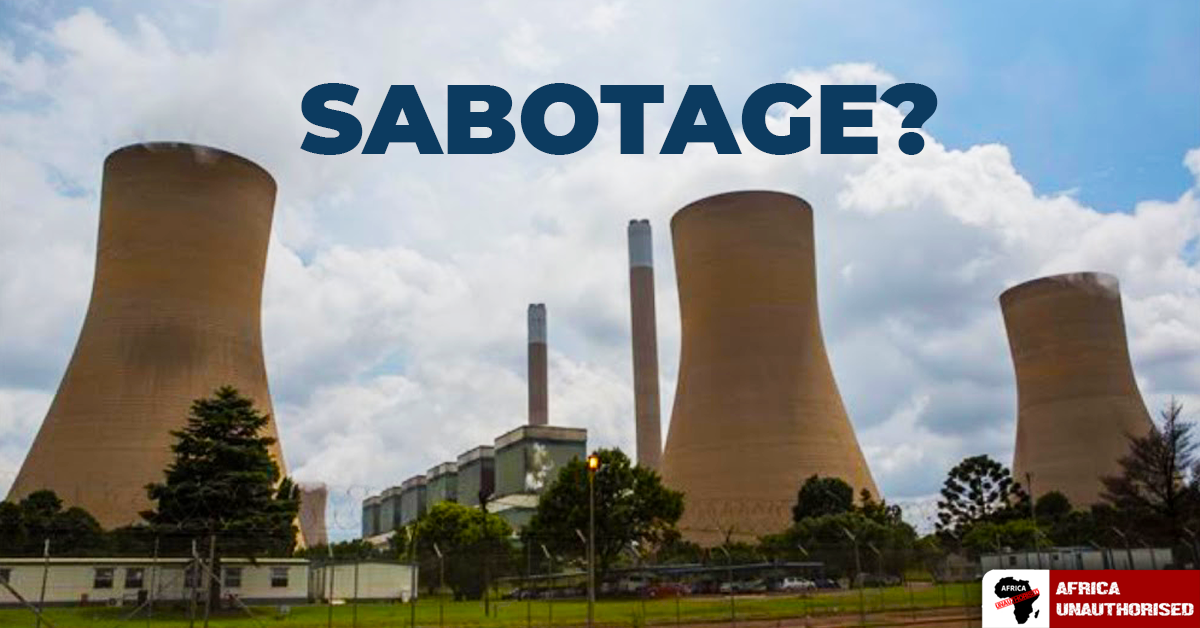 Eskom’s new board, sabotage at certain plants and the bugging of Andre de Ruyter’s vehicle (with a powerful device not available on the open market) have dominated our press this week. The fact that power outages continue as before is hardly news anymore.

It has become apparent for quite a while that there has been sabotage at certain of the Eskom plants, a view that has been suggested in the press for quite some time. Now at last Minister Gordhan admitted that some Eskom employees were “resisting” moves at the power utility to root out corruption and to apply higher performance standards. It is also thought that the spying device is the work of criminals at Eskom want to thwaught de Ruyter in his effort to curb the  corruption.

Then Pravin Gordhan reported that 8 more units had to be taken out of commission at the Camden power station where an experienced technician “opened a wrong valve”. And so the black-outs continue.

There is now a brand new board at our power Utility that has Cyril’s enthusiastic backing; but would you expect otherwise from our President?

With the ANC losing popularity even amongst the black population, coalitions are becoming a much discussed part of our politics. This can be a very bumpy ride as the political amalgamations in Johannesburg and Nelson Mandela Bay  have recently experienced.

This past week the DA led coalition in Johannesburg fell apart from tears and threats and court applications and the ANC, with less than 30% of the vote in the Johannesburg metro, have again taken over the reigns. And as you can imagine all of this has to do with opportunities of power and to get to feed at the trough of the State’s fiscus. And don’t for a moment underestimate Julius Malema in all this turmoil. With the ANC The EFF now become key to alliances that can topple most other coalitions. But Julius is shrewd and will demand more than just quid pro-quo. Some can see Julius soon as Deputy President of our country. That is a premise that RW Johnson doesn’t think is far fetched at all.

It seems that all the smaller parties in the coalition were ignored when the DA mayor took Johannesburg over and this caused its downfall. Hopefully, Zille and the DA will learn from this. John Steenhuisen, DA leader,  believes the Cope Party was wilfully responsible for unseating the coalition concept to unseat his Party for nefarious reasons.

Yesterday Johannesburg not only had to handle electricity outages, water has also been rationed and Stage 2 water restrictions has been announced. Taps have run dry because reservoirs are running empty. With all this going on I can think of a lot better places where to be living right now than Johannesburg. Rico was quick to action with the new ANC city counsel from Business Maverick.

The very first State visit of King Charles 111’s reign will be bestowed on President Cyril Ramaphosa and his wife, Dr Tshepo Motsepe in November at Buckingham Palace. This visit was planned during the life of Queen Elizabeth and the Palace has agreed to allow those plans to be completed.

Paul O’Sullivan, the hugely controversial forensic expert, is after “shady” cops. And when O’Sullivan is after someone he makes lots of noise which then usually makes lots of news. He believes high-up cops are protecting criminal syndicates and he wants answers from the Police big shots to whom he has written. He has been in prison (on trumped up charges) and is not scared of the police. This matter has to do with the apparent cover-up by the police after the murder of the Anti-crime division head, Charl Kinnear. The matter needs exposure and O’Sullivan is the man to get at the bottom of it all.

Accused No 1 has been virtually ignored by the cadres in his province, KZN where he has made himself available as national chairman while supporting his ex-wife Nkosana Dlamini-Zuma as to become president of the ANC. Nakosasa Dlamini-Zuma carries the RET-faction’s support.  However the party in KZN has come out in favour of Zweli Mkize for president with Limpopo ANC leader Stan Mathabatha as Vice President. Mathabatha is known to be a strong Cyril supporter.

On the weekend Cyril won the nomination from his branch in Soweto unsurprisingly. It really is beginning to look like a three horse race to see who leads the ANC after the ANC elective conference in December.  Having said all that there are still plenty other ANC big-shots looking for the power that comes with leadership and Zapiro gets it right again with this cartoon from Daily Maverick.

Rob Hersov has been in the news again this week with his plan to buy and operate small regional airports. He and his partner are talking to government and they believe that their proposals will go a long way to stimulating the economy which has regressed so terribly under BEE policy.

It is truly sad to learn what is going on at UCT. Both the Vice-Chancellor (Mamokgethi Phakeng) and the Chair of the UCT Council ( Babalwa Ngonyama) are in trouble for having deliberately misled the university’s governing bodies. Accusations of racism and bullying abound and Rebecca Davis has exposed this filthy can of worms in a detailed article in the Daily Maverick on Monday. Click on the link to read it here:

I am not happy continually reporting on the negative. The reality of our situation is indeed that drastic steps need to be taken. Not only at Eskom where corruption thrives like never before, but in our policing and almost all State departments.

Last week I highlighted an article “Gangster State” which very much applies to what we are having to contend with here. This week, “Mr Fixfokol” the Minister of Transport, Fikile Mbabula was taken to court on a bus transport matter. Here a ‘taxi association’– read ‘gang’, tells you, the bus driver how much to charge and what routes to follow and how many passengers your buses can transport. If the drivers don’t comply they get intimidated and if they still don’t listen they get shot at.

Gangsterism is ruling the country and our Ministers and the Police are just not good enough. It’s in the press it’s on the radio and what is happening? Nothing.

This makes one ask; are we already a failed State?

*The Auditor General has warned that the SABC will be closed down if they continue making losses.

*In an unrelated matter the police have NOT identified any suspects in the R850 million graft loss at Tembisa hospital.

*A German tourist was shot dead going into Kruger Park on Tuesday. Minister Sisulu says that’s no so bad as he is only the 3rd tourist to have been murdered here in 27 years.

The mining sector is looking good for investors. Our mines produce about 50% of all our exports, and here coal is doing particularly well as the price of other commodities having struggled since Covid.

Thailand is fully open to SA tourists. No vaccines and no proof of tests necessary.

The Proteas played a 3 match T20 series in India and were taught a lesson in the first two matches. But our boys bounced back nicely in the last game this week, which gives us hope for the upcoming World Cup.

After the football the coach and I watched the Stormers play Edinburgh in Scotland. It wasn’t nice (is rugby ever nice these days?) but we just managed a last gasp try to earn the bonus point which keeps us sharing a place at the top of the log.

As you would guess the coach was also on the couch to watch the great North London derby. Spurs went to Emirates Stadium where before the match the two teams, Arsenal and Spurs were touching each other at the top of the Premiership table. Spurs got trashed 3-1and for us it wasn’t an easy afternoon’s viewing; but then you know it’s hard being a Spurs fan.