The Tusk and Scrotum 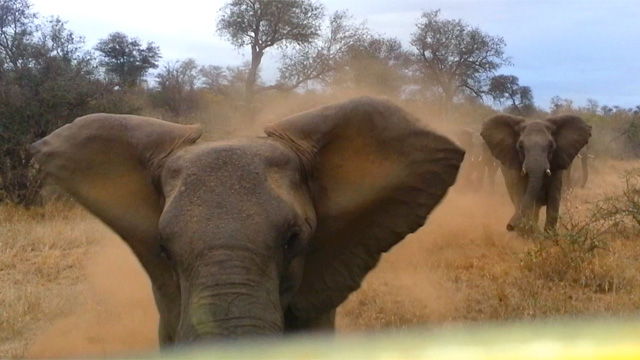 Soon after being mauled by a leopard ‘Danny’ was posted to Management Unit based in Wankie National Park. This arm of the department was tasked with Capture and Relocation, PAC (Problem Animal Control) and Population Control (culling) it was a mobile unit consisting of a warden, six rangers and twenty scouts.

Here a novel problem awaited him. Two of the rangers at his new station of sardonic inclination and irreverent disposition took great delight in extracting laughter at ‘Danny’s’ expense. One was a farmer’s son from New Zealand who had ended up in Rhodesia by accident. His name was Terry Roach and on leaving school he became involved in a spat with his father over going to university. On expressing a desire to engage in a tertiary education his father insisted that despite sending him to one of the most expensive private schools in New Zealand all the boy had done was ‘eat his lunch’. For this reason father suggested his son find a job and prove his mettle before being indulged with a university education. In a fit of pique the young fellow went to a travel agent, looked at a map and pointed at a town in Canada. He made it there and worked a while on a ranch but the extreme cold got to him and he decided to find new pastures. While trying to find his way to Cape Town a lay-over meant a day had to be spent in Salisbury, Rhodesia awaiting a connecting flight. Having recovered his bags and unsure what to do with his time it was with some surprise he discovered himself on the street having followed no entry formalities. Thinking himself remiss he re-entered the building to enquire only to be told by a friendly official that the country was happy to have him visit and for as long as it suited him. Unknown to him there was a war on and strapping young white males were a sought after commodity. Intrigued, and warming to the location, he made his way to town and went into a bar at the Jameson Hotel where good cheer was quickly found in the company of a group of farmers on their weekly jaunt to town. When one of them discovered the new arrival was a ‘Kiwi’ from farming stock employment was immediately offered. The farmer wanted to go fishing at Lake Kariba and asked Terry to run his farm in his absence. Over a handshake the offer was accepted and when the farmer returned a fortnight later all appeared to be running so well his employer took himself off for another two weeks. So it was that Terry found a new home and some time later joined The Department of National Parks.

The other was the Park’s pilot, a lanky lithesome fellow with a ready smile and breezy personality by the name of Richard Clough; a great joker who took life in an easy stride he was very much the antithesis of ‘Danny’. Both were very fond of ‘Danny’ but neither could resist an opportunity to tease him and the leopard incident would remain a top topic of conversation for as long as they were in the vicinity.

At this time the Parks ecologists produced alarming figures on elephant numbers in the protected zone and an instruction was given to the Management Unit to reduce the herd within its confines by in the region of 10,000 animals. This meant the team was to be deployed on intensive culling operations led by the Warden, a legendary figure by the name of Clem Coetzee. In a body of hard men where respect is difficult to come by he was revered. An extraordinarily competent man  who led from the front, made quick, decisive decisions and commanded undivided loyalty from all who worked under him. Few African personalities have contributed as much to conservation and received as little credit as this remarkable individual.

The tactics for the culling were simple but dangerous. Clough, flying a Super-Cub would locate the animals, normally a breeding herd, and relay the position and its proximity to a road. The hunters would then deploy to the immediate area and when in position the pilot would drive the herd into the hunters who would then kill them as expeditiously as humanly possible. A brutal undertaking unloved by the practitioners but one that was considered vital in the interests of the greater good. Such was the environmental degradation caused by over-population researchers were firmly of the opinion that without corrective action the knock-on effects would have been disastrous not only for the elephant but for most species of wildlife then residing in the park.

The key to the success of this tactic was excellent organisation, team work, cool nerves and precise marksmanship. With only four riflemen on the ground dealing with a herd of forty to fifty panic-stricken elephant there was virtually no margin for error. The lynch-pin was Coetzee who would stand central to the proceedings and have the herd run onto him. Normally led by a matriarch, the warden would wait calmly until metres separated him from a trampling and death  before downing her. An errant bullet would almost certainly be his last. His survival is testament to his unusual skill and courage.

As it turned out Coetzee did not fail and his shot would bring the lead animal to its knees rendering the herd leaderless and in disarray whereupon the other three hunters on the flanks would then engage and destroy as the rest tried to break and run from the killing field. An extremely hazardous proposition with rampant elephant everywhere to which was the added risk of being hit in the crossfire which made understanding amongst the riflemen an absolute imperative. Sadly there were inevitable lapses resulting in tragedies that saw good men die in the line of duty.

On one of these outings it all went wrong for ‘Danny’. It was a particularly dry day when they found the herd late and the sun was hot and high in the sky when the shooting started. As usual all hell broke loose and ‘Danny’  found himself on the same flank as Terry gunning animals down in a furious volley of fire when his aim went wide missing an elephant fleeing the deadly melee causing him to track it in his sights while firing additional rounds into its rump as it broke the cordon. While focusing on this animal he was forced to take his eye off the rest of the herd and this proved disastrous because unseen by him or his comrade-in-arms who was denied visibility by the dust, he was flattened from behind by a rampant cow who then impaled him in one thrust and struck off into the wild yonder with ‘Danny’ hanging face down from a tusk. Roaring off into the brush inverted, with a tusk through his buttock it did occur to him his predicament was an unusual one but there was little doubt in his traumatised mind his embarrassment was destined to be short lived. Death would surely follow soon.

The rest of the team were oblivious to the loss of one of their own and just when ‘Danny’ thought it was all over and he was about to make an inglorious departure from life on earth an unlikely angel of mercy appeared overhead in the form of his erstwhile tormentor Richard  Clough in his Super-Cub. Clough had seen the cow break out and hit the ranger and radioed the observation but when there was no response from the team on the ground it was clear to him some sort of remedial action was urgently required. With unusual skill and nerve the little aircraft was immediately put into a dive aimed at the fleeing elephant. Clough bore down on her from her front pulling out mere metres above her head triggering an enraged reaction which saw her swing her head skywards sending ‘Danny’  flying high but free of the tusk that had punctured his rear and skewered through his thigh into his scrotum. The wounded ranger hit the ground hard but immediately noticed the little aircraft in a tight turn heading back to strafe the offending elephant again in order to keep it at bay.  Then there were two shots nearby, the elephant crumpled and Roach came romping towards him with an annoying grin on his face. It did occur to ‘Danny’ that if nothing else he did give people something to smile about but he was in considerable pain and wondered aloud how bad his injuries were.

“I know you’re fucking hurt ‘Danny’, you’ve just had an elephant’s tusk jammed up your arse and that’s a common place for elephant to stick their teeth!”

Roach knelt down to take a closer look at his patient and was pleased to notice the bleeding was not excessive. It seemed the femoral artery was intact which was his main concern. While reassuring ‘Danny’  he would be OK and in the process of loosening his gun-belt for comfort something white, round and shining lying in the sand between the wounded man’s legs caught his eye. Roach looked closer and to his surprise noticed it was a tenuously connected testicle that had been dislodged from the holding bag when the scrotum had been ruptured.

“Hey ‘Danny’, here’s one of your balls,” he announced with glee. He then plucked the testicle out of the sand with the reverence one would accord finding a lost golf ball and tried to dust the sand from it.

“Well yes and it’s full because it’s never been used and either way it don’t make a whole lot of difference to you because you probably never going to need the bloody thing anyway. Do you want it?” He held it up for ‘Danny’ to see.

“Yes please Terry.” He nodded vigorously and thanked him profusely for being kind enough to give him back his ball. Water was produced from a flask to wash the sand off ‘Danny’s family jewel and it was replaced neatly in its pouch. Meanwhile a helicopter had been called from a nearby air-force base and within twenty minutes of ‘Danny’ completing his histrionics he was airborne and on his way back to hospital, grateful for delivery from death but perplexed by his penchant for finding himself in severely compromising positions.

Fortunately for ‘Danny’ the damage was mainly muscular and an assurance that all would eventually be well was well received. If a breeding programme was on his list of things to do the doctor told him all the necessary tools appeared to be back in position and in working order. ‘Danny’  thanked him for the information a little sheepishly while not letting on the ongoing problem he was encountering in securing a partner with whom to engage in the procreation process.