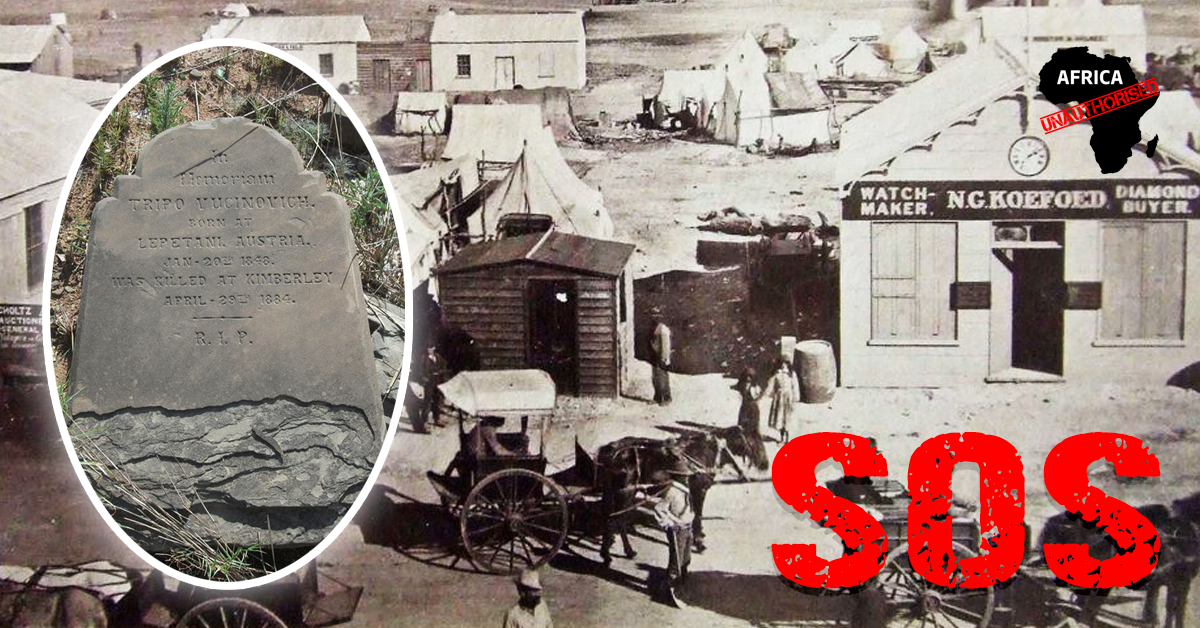 Just got back from the supermarket where absolutely nothing was free, or even made me feel like I was a person that should be proud to be free. Nevertheless, enjoy your day of freedom from whatever on Tuesday. Perhaps your local golf club will be allowing a free round or the caddy becomes generous with his time and in fact gives YOU some money as the entertainment you provide is really worth something!

It was in April 1884 that there was a serious strike by diamond miners in Kimberley. While it may not have been South Africa’s first ever industrial strike, it is believed to be the country’s first ever that saw strikers shot dead – and they were all white people killed. That may surprise one or two of the eight regular readers of this weekly blurb.

The white miners at all four Kimberley mines went on strike because they objected most strenuously to being stripped and searched for diamonds each day they finished their shifts. The searching for diamonds, with little or no respect to the individual’s dignity, had been instituted on the black miners ever since diamonds had been discovered in Kimberley – but never on the whites.

This strike, which started on 24 April 1884, spread to all the other mining companies operating in the four diamond mines – Kimberley, De Beers, Bultfontein and Dutoitspan – mainly because those who objected to being searched were instantly dismissed.

What made matters infinitely worse was that all vacancies were filled immediately by the mining companies. Times were tough and any money is bread and milk.

It was this levelling of the playing fields down to the black miners’ level that the white miners were objecting to – they would rather strike work than subject themselves to the insensitive and degrading searches that mine management had agreed upon.

There were different mining companies operating in each of the four open mines at that stage in Kimberley’s history, so the strikers – representing most of the mining companies, marched upon their fellow (scab) miners at the engine house of the Kimberley Central Diamond Mining Company, and the adjacent French Company, in an attempt to persuade them to cease work. It was said that a mine company manager had already been pulled off his horse and robbed of his revolver. Tensions were running high.

The group of striking miners gathered at the Halfway House Hotel on Dutoitspan Road, then moved off to the junction of Dutoitspan Road and Jones Street, and at 2.45pm marched on “the Kopje”, the Kimberley mine.

Led by 31 year old Philip Henry Holmes, an overseer in the employ of Schwab’s Gully Diamond Mining Company at the De Beers mine, the march of some 200-350 unarmed white miners, together with at least 1000 blacks, moved off to the Central Diamond Mining Company and French Company works on the edge of the Kimberley Mine to stop the pumpmen from working, but as they got to the fence marking the property of the mining company, the French Company mine manager, Mr Wright, threatened to open fire if the marchers came any closer. With him was the local Commissioner of Police, Ewan Christian, and under barricades placed by the company to protect their property, were special constables and at least six policemen.

Philip Holmes, after speaking to Wright for a few minutes, stepped a pace closer and queried the official: “You would not shoot an unarmed man, surely?” These were Holmes’ last words on this earth as an un-named mining official opened fire from less than a metre away, killing him stone dead with a bullet in the head. Immediately, about twenty mine officials, police, special constables and so-called “scabs” hiding behind overturned cocopans (mining trucks) in the barricade opened fire on the massed marchers, who then scattered in absolute chaos and confusion.

South Africa’s first ever industrial strike had ended in bloodshed, but it would not be the last to end in such a manner.

An immediate inquest, and later a judicial inquiry, were held and both found that the killing of the seven unarmed miners (and the wounding of the other 40) “was amply justified”.