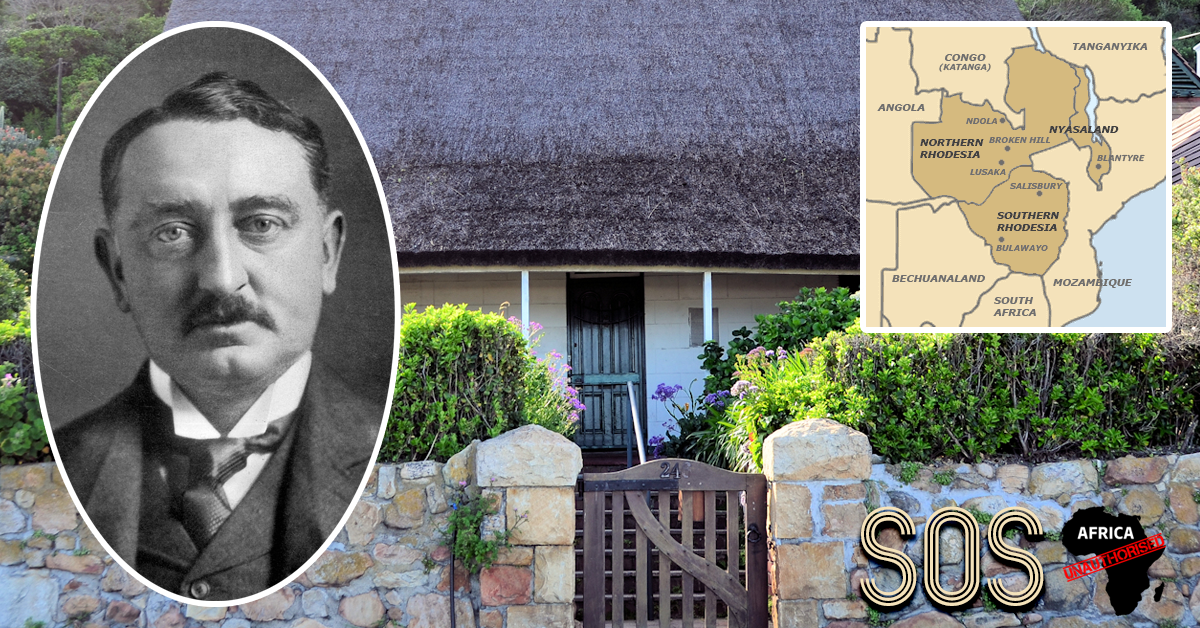 When the name Cecil Rhodes is mentioned in these turbulent times, it is either in connection with his memorials being taken down, or vandals destroying said memorials, or gatherings to discuss how to take the memorials down.

He died at the relatively young age of 48 years and 8 months on 26 March 1902 in his cottage at Muizenburg (St James) – some of you may even have visited the museum in the self-same cottage. It is worth a visit.

So the anniversary of his death this last week was not recalled, except in an historical blog in Kimberley where he had made his initial fortune from diamonds. The citizens of Kimberley thought highly of Rhodes. After all, he was a nobody when he arrived at the dry diggings and worked as a digger in his brother’s claim in what is now the Big Hole.

This particular blurb is not going to regurgitate how he made his money, his deeds and misdeeds, the Raid, his political career, and the oh so many other stories successful and not so successful that he crammed into his short life. This is more about what his death 119 years ago meant to the people in Kimberley.

Incidentally 26 March last year (2020) was our last day of freedom before the lockdown began. Do you remember that last day? I do, I stood in a queue outside a pharmacy that seemed to stretch for miles. Inside, the shelves were empty as extremely concerned people stocked up on absolutely everything. The future was extremely uncertain and I am sure many wondered if they would still be here a year later. Well, I did, and here I am, still here….

Back to Mr Rhodes.

His death stunned Kimberley, despite the regular bulletins issued daily on his deteriorating health. The simple announcement that ‘Rhodes is dead’ in the late afternoon of the 26th spread from the Kimberley Club to all the suburbs, the compounds, and to the mines. That night “…Kimberley slept, uneasily with the sense of great disaster and of gloom heavily upon the city…the loss of Mr Rhodes was an irreparable one,” said the Mayor, H.A. Oliver.

George Green, editor of the Diamond Fields Advertiser, and father of the more famous author Lawrence Green, wrote that “The thoughts of all of us today are centred upon the man whom we knew so well…it creates a blank on the Diamond Fields which it is beyond the power of the pen to describe, but which is felt by every living soul.”

“At the Club a group of men had gathered around the entrance gates. One took the telegram, opened it and nodded, with lifted eyebrows, to the others. Very quietly they all went into the lounge and swiftly the whisper spread. The shift coming off duty at the various mines stood shocked before the simple notice. As daylight broke, work upon the towering headgears ceased, the endless procession of little trucks came to a standstill, the roar of the loading skips, the screams of the shift whistles, died away; the iron tongued clatter of the machinery ceased; shops were shuttered; flags hung half mast, listless and weary; slowly the buildings of the town commenced to wrap themselves in purple trappings of woe. Seldom in the history of Empire has the death of a great man been more honestly and whole-heartedly mourned than the death of Rhodes was mourned upon the diamond fields.”

Alfred Beit, in London when the news came, was opening letters. Among the pile was one containing information on a funeral of a friend’s wife. “Poor – (the husband of the deceased) – poor -, but that’s nothing new after this.”

It would be the largest funeral South Africa would ever see in its’ short history. Rhodes’ decision to be buried in the Matopos (Zimbabwe) on ‘World’s View’ had ensured that it would be just that, and tens of thousands not only witnessed the funeral procession in Cape Town, but also paid homage in their multitudes as the funeral train travelled from the shadow of Table Mountain along Rhodes’ Cape to Cairo rail link to Kimberley, Mafeking, and then finally, to Bulawayo. The Prime Minister of the Cape, Sir Gordon Sprigg, announced that it would be a State Funeral.

The entire country was in a state of war  – it was 1902 – and British and Imperial soldiers along the rail route as the funeral train passed, stood in silent homage next to their blockhouses, camps and on bridges. It would be a memory that they would pass on to their grandchildren – the last ride of the greatest man South Africa had ever seen up until that stage.

There were two Lying-in-State ceremonies, at Groote Schuur, and then at the Houses of Parliament, before the funeral service at the Anglican Cathedral in Cape Town. The 28.1 pounder ‘Long Cecil’ gun, designed by George Labram and made by the De Beers Workshops in Kimberley during the 124 day siege of 1899-1900, was used as the gun carriage for the funeral procession, having been sent from Kimberley for that specific purpose. It would be the last time it would play any ‘active’ role before being placed on the stylobate of the Honoured Dead Memorial in Kimberley.

Executive Councillors and Judges in the procession and with a link to Kimberley included Sir John Buchanan, J.X. Merriman, and J.W. Sauer.

Kimberley, and De Beers Consolidated Mines of course, played a role in the arrangements of the lying-in-state, the processions, the funeral, and the various myriad details that were necessary for such a detailed and intricate stage set. Dr T.W. Smartt, Member of the Legislative Assembly and the then Cape Commissioner of Public Works, superintended the entire plan from the deathbed to internment in the Matopos. The De Beers Director’s private coach was in Cape Town at the time and permission was granted for the coach to be used as the resting place for the coffin for the rail trip to Bulawayo. Changes were made in the interior of the coach, and space was made for a special contingent of Cape Police to travel as the Guard of Honour for the entire journey.

The arrival of the funeral train in Kimberley at 4 am on 7 April 1902 saw ‘his’ town where he had amassed his fortune give him a right royal sending off. The Kimberley Regiment provided the Guard of Honour at the railway station, and the Griqualand West Brigade Band, under the baton of Herr Carl Rybnikar, played solemn music.

There to meet the train at Kimberley’s platform Number One were the acting Mayor, Councillor Robert Henderson, Councilors A. Bennie, D.W. Greatbatch, J.D. Tyson, J. Oats and H.A. Ziegenbein, together with the acting Town Clerk, W.W. Alexander, and Colonel David Harris. At 5 am the Kimberley Regiment, under Lt-Colonel R.A. Finlayson, filed on to the platform, and at 6 am the Brigade band commenced playing the ‘Dead March’, while the crowd, who had gathered since the early hours began filing past Rhodes coffin still in the coach. A large body of Police were in attendance to control the crowd around the railway station, and by 10 am some 15 000 citizens of Kimberley had paid their last respects, including Njuba, a son of the late Ndebele King Lobengula, who had employment with De Beers at the time.

The Women of Kimberley presented a wreath with the words ‘Thy Will be Done’ and ‘With Deepest Sympathy from the Women of Kimberley’. All other wreaths, of which there were hundreds, were placed within the carriage before departure at 10.45 am that same morning. Shortly before departure the band approached the carriage, and the Guard of Honour presented arms. The train moved slowly forwards heading north, and Cecil Rhodes, for the final time, left the town where he had made his fortune.

4 thoughts on “SOS – Steve On Sunday”