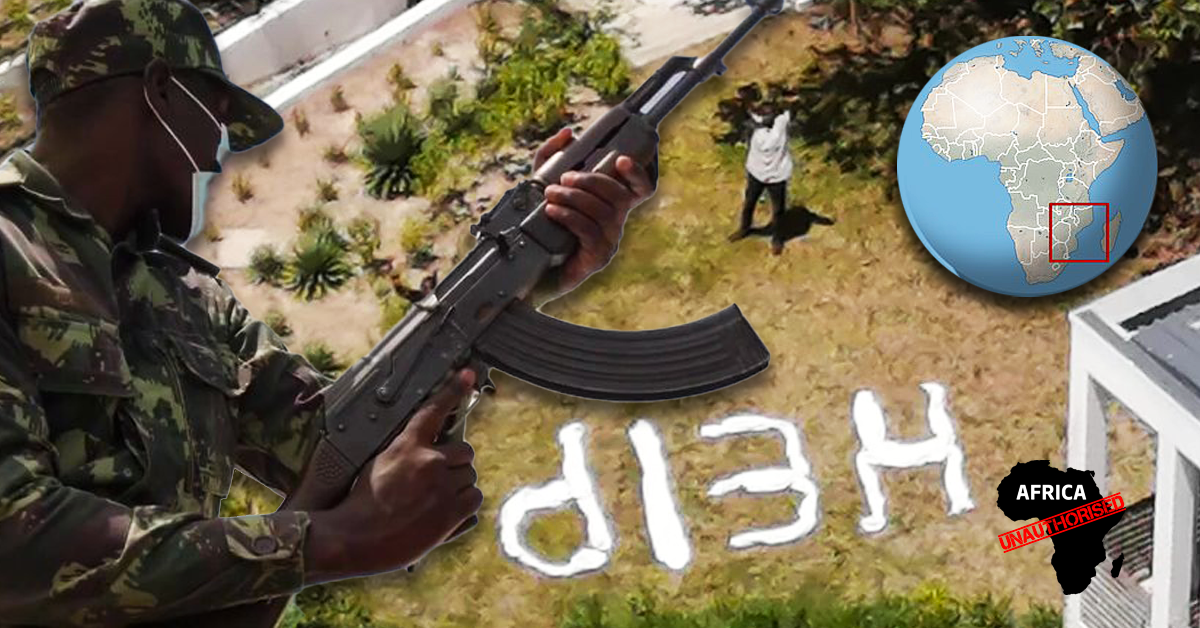 Over the last few days I have received, from a number of people some of the most shocking video clips I have ever seen. When I say I saw the one I describe here, I was only able to watch a short piece before I had to disconnect; I simply did not have the stomach to watch the complete film. The footage shows a group of armed men in camouflage going through the process of beheading someone using a small blade in a ghastly exercise that takes time for the decapitation to be completed before the head is removed and brandished aloft for all to see, and the body rolled into a ditch. Waiting patiently, watching this gruesome spectacle is about a dozen young men who are summoned one at a time to suffer the same grisly fate. I am told this has taken place in Mozambique but have been unable to confirm this; what is beyond doubt is it is somewhere in Africa. This is only one doing the rounds, there are more; another of live people having limbs hacked off and another of people being burned alive. These provide nauseating evidence of the almost unbelievable cruelty that is taking place on a routine basis in many African countries.

Recently I wrote about how Amnesty International had played an important role in having the DAG (Dyck Advisory Group) contract in northern Mozambique terminated where Lionel Dyck and his men were battling the Islamic militants. Amnesty accused the group of committing war crimes and this report immediately caught the attention of the international press because most of his men are white and like former police officer Derek Chauvin in Minneapolis, Minnesota, white men wherever they may be can do no right. So while Africans accross the continent are dying from starvation disease and poverty thanks to appalling  misgovernance the world is absolutely focused on fate of a police officer who was compelled to use force to subdue and arrest a convicted criminal, of immense physical strength, high on drugs who had just committed another crime.

There is some sad irony in all this.  In Mozambique, the Nyussi Frelimo administration has asked the Portuguese government to send troops to help deal with the insurrection.  These are the same Portuguese that were hounded out of the country 45 years ago with what they could carry because they were accused of being horrible to the natives. Now it looks like they wanted back.

Also in the wings are the Americans who have apparently sent a team of Green Berets to assist. While some are hopeful that they will intervene militarily, this, in my view, is highly unlikely given the context of our times. Portuguese and American military commanders and politicians will be well aware that one of their soldiers caught on camera hurting an African in Mozambique will probably attract the same international response as has been visited upon Derek Chauvin in Minneapolis. As a result they will probably stay on the sidelines and the slaughter will continue because the response from neighbouring African countries to the crisis has been nothing short of pathetic.

This is not a new situation in Africa.  African governments have proved repeatedly they are incapable of resolving any of the issues that bedevil the continent; most of them cannot run themselves, let alone intervene effectively in neighbouring states. Which is why outside help is inevitably required. To my knowledge, the only successful military interventions in Africa recently have been those involving forces with European leadership, and organisational support.

When Colonel Eeben Barlow and his Executive Outcomes teams were given the chance, they were able to defeat the aggressors and restore a semblance of peace and order in the African countries they were tasked to operate. However success seems to have been a curse upon him because no sooner had he and his men shown they were winning when they were asked to leave, and this was very often as a result of US pressure on host governments.

The elephant in the room:  where is the international media and the attendant universal outrage when blacks kill blacks?  This applies not only in Africa. In America, the chances of a black man being killed by a white man are statistically minuscule and by a cop they are even smaller; well over 90% of black Americans are killed by black Americans; but on this the press is silent while saving all its energy for the next micro-aggression wherever it may be as long as the alleged assailant is white. So far in 2021, 97 cops have been killed in the line of duty but nobody appears to know this, and fewer appear to care.

In Rwanda in 1994 nearly one million Tutsis were slaughtered, and the world hardly heard about it, let alone responded to it; much the same continues today and nobody really seems to care. No CNN, no Sky News, no BBC, no Guardian newspaper, no New York Times, no Washington Post.  They are totally fixated on the fate of Derek Chauvin, echoing every piece of evidence that portrays this man as a racist monster.  In so doing they are further dividing a troubled America while ratcheting up the popular pressure on the jury to convict no matter what the facts may show.

I watch this travesty with a bitter sense of déjà vu. In many ways we whites in Africa were similarly portrayed; the media led the international mob in convincing the world that white people in Africa were entirely racist; only there to murder, plunder and abuse innocent blacks brutally dispossessed of their liberty, their land and their riches. The world believed this lie and the pressure became unsustainable.  Whites were relieved of their ‘ill gotten gains’, forced from positions of authority throughout the continent and in most cases compelled to depart their homes, leaving behind them arguably the greatest man-made humanitarian disaster in recorded history.

In a way the media is doing the same thing to America where whites in authority are under scrutiny for any action that might be deemed racist; law-enforcement officers are now acutely aware that their powers and methods of arrest are severely curtailed; that any use of force in any situation where a black person is involved may result in them being prosecuted. This will soon result in many of the people who keep America safe and civilised being forced onto the margins and rendered redundant. When this happens, we can be certain the US will follow the same fate as we have in Africa.

Generations of white people all over the world are being compelled to hang their heads in shame because they are all somehow to blame for the enslavement of black people in centuries past. There is a tragic irony in this because I look at the state of Africa today and ask myself what would the response be if ships from America docked at African ports looking for labour in return for little or no pay, but with safety and security guaranteed. I suspect they would be inundated; an armed presence would be required; not to force people on the ships, but off them.