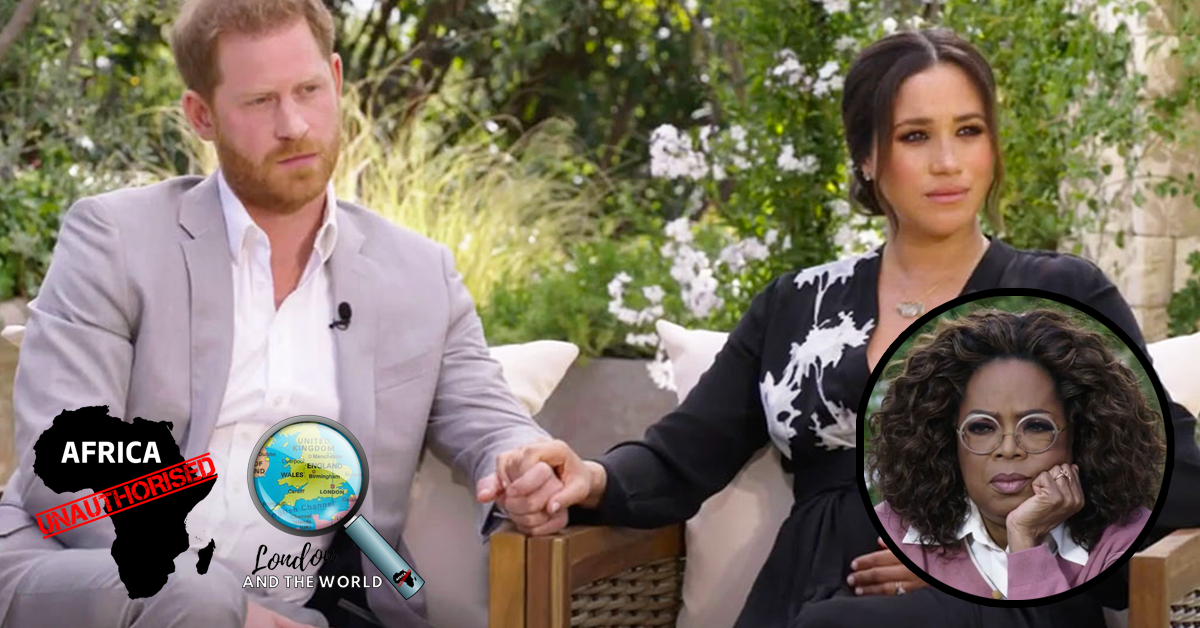 ADMITTEDLY THERE ARE FAR MORE IMPORTANT THINGS to consider than a jumped-up interview featuring that 3rd rate actor Meghan Markle and his surrendered male ginger wife, although some insights contained within this overhyped spectacle do offer a glimpse into a deteriorating world – even beyond the damage of the response to Covid-19. In a performance worthy of the title ‘George Floyd’s Royals’ (in the same way Diana was the ‘People’s Princess’), all of 2020’s worst pathologies were expertly choreographed. Following the debacle, #Abolishthemonarchy trended on Twitter, something no doubt engineered by the anarchist, he/him/they coward editorialists who work there (less than 6% of the British population subscribes to Twitter, and there were only 7000 odd tweets on the subject…so…).

Personally, the only way the Royal Family makes sense is when it is seen through Phil the Greek, The Duke of Edinburgh, recently receiving treatment in hospital. Whilst the theory suggests this institution is a measurement of moral stature, the reality is that one of its figureheads has spent many of his 99 years making obscene remarks and being fabulously rude to people. As well he might: Phil the Greek is our King of Political Incorrectness – and his reign has been nothing short of truly, magnificently glorious.

A few from among his many, many barnstormers:

In Glasgow in 1995, he asked a Scottish driving instructor: ‘how do you keep the natives off the booze long enough to pass the test?’

In 2007, Phil visited a school in Manchester where he came across a stocky 13-year-old who told him he wanted to be an astronaut. Phil laughed and pointed at him: ‘don’t be ridiculous, you’re far too fat to fit into a spaceship!’

In 2014, he visited a Bangladeshi Youth Centre in inner-city London and happened across an 11-year-old boy suffering from proptosis (bug eyes). Phil smiled at him and whispered, ‘are you on drugs today?’

You’d think it couldn’t get better – but you’d be mistaken. At some point in the 1960s, the Yaohnanen tribe on a remote island off the Vanuatu archipelago in the South Pacific decided Phil was their dude and granted him divine being status. So they started being pen-pals: Phil heard about the growing adoration, so he sent the tribe a photo of himself. They replied by sending him a traditional club used to kill pigs in the village, so he sent them a photo of himself posing with the club – and this got them very, very excited: in 2007, a group from the islands travelled to London to meet him – they exchanged gifts in private and reportedly got on extremely well.

If a Royal family isn’t busying itself with this kind of thing, then what’s the point?

Most of the European Royals are unforgivably boring, thanks to generations of incest that have left them all mute, clubfooted or hunchbacked. The African ones seem content with reed dances and handsome subsidies. A very distant second to Phil is that mad Thai King who made his poodle an Air Force chief and was spotted walking around a German mall in a crop top.

Which brings us back to Mr. Markle and his wife.

Here’s a question: in a world where politicians have hidden behind demonstrably false data for an entire year yet kept their jobs, which problems are these two going to solve? Which one of them is busy lobbying to have Brian Molefe and Ace Magashule jailed? Do they know how to fix and drive trains? Will Mr. Markle be able to save the British economy from the waves of insolvencies that September is poised to trigger?

Observing those leaping to Mr. and Mrs. Markle’s defense is revealing: Hillary Clinton, the losers at CNN, the greedy, fraudulent community organizers across America, blue tick Twitter, the unconscious bias shysters, Hollywood – all agents of chaos, with an embarrassing lack of self-awareness/entitlement complex – victims only of their own imaginations seeking to humiliate an elderly lady (Piers Morgan, irrespective of his contempt for Mr. Markle, is a fully subscribed season ticket holder of this group).

Not three months into the year and the west has declared another culture war upon itself. China is laughing its head off.

Jun 6, 2021 Steve Lunderstedt
The Week That Was