Have you heard about the Australian police ‘Fixated Person’s Unit’? 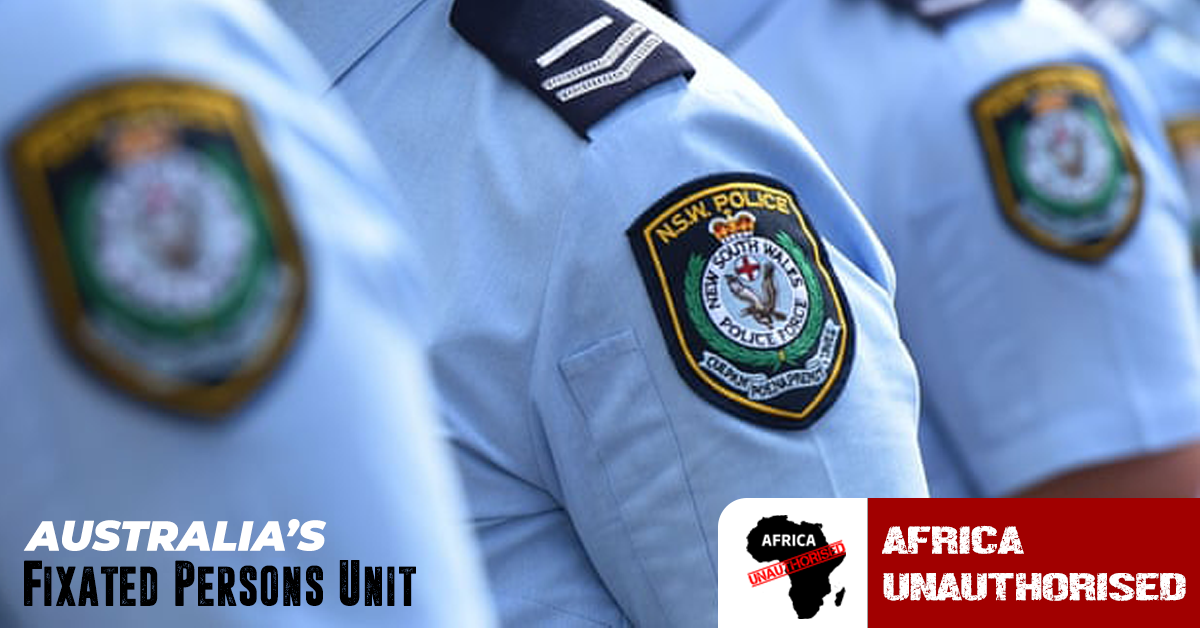 Oh! Yes.  Believe it, its true!  A version of the Australian Fixated Person’s Unit (“FPU”) has been established in every state police force in Australia.  The NSW police told the Guardian that “a fixated person was defined as anyone who “has an obsessive preoccupation, pursued to an excessive or irrational degree, with a range of individuals, including public office holders.”

Extract: “According to the official brochures, the Queensland Fixated Threat Assessment Centre (QFTAC) is an agency staffed by Queensland Police officers and clinicians from the Queensland Forensic Mental Health Service to identify people who are thought to “fixate” on government officials and other public identities.”

I thought that anything sinisterly named a Fixated Person’s Unit, would be from the far-left elitist lunatics.  I was wrong.  It was apparently established by Campbell Newman’s Liberal National Party Queensland, in 2013.  A so-called Conservative Party.  Go figure.

Chris Nyst a well-known Queensland solicitor wrote in a blog  <https://independentaustralia.net/life/life-display/queensland-polices-orwellian-fixated-persons-unit,11395> Extract: “I learned something kind of crazy that I never knew before. A gentleman came to my office complaining that five police officers had recently materialized at his front door, without warning or invitation, wanting to conduct a psychiatric assessment on him. It all sounded more than a little bit bizarre to me, but, since the gentleman appeared otherwise quite lucid, I tried to dig a little deeper in the hope of understanding what it may be all about. He didn’t really know. The best he could tell me was the officers concerned were apparently attached to something called the Fixated Persons Unit“ by Chris Nyst.

Now the NSW police propose to prosecute Youtube ‘Friendly-Jordies’ Comedian, Jordan Shanks, and John Barilaro critic, Kristo Langster using these draconian powers.  In our opinion, the prosecution strategy is to hide behind the sub-judice rules. This is an inappropriate use of the law and opens the door for more criticism of the NSW police.

A complaint against Jordan Shanks came out of the NSW Government Premiers Office.  In effect, the NSW Government wanted the NSW Sydney City Police Command to investigate Christo Langster and Jordan Shanks, using the FPU.  It isn’t rocket science and the NSW Police Commissioner should have refused.  There is no crime of being a nasty government critic.  But, there is a crime, when a government uses its power to stop political critics from free speech.

The complaints against Kristo Langster and Jordan Shanks are blatantly political and maliciously motivated.  In our opinion, both Shanks and Langster, are nasty little bastards.  But, so what?

A Senior NSW Government Minister, John Barilaro, has been targeted on social media by Kristo Langster.  John Barilaro is presently being investigated by the NSW ICAC on corruption charges.  Barilaro is a ‘tough nut’ but apparently thin-skinned.  Both Shanks and Langster are squeaking wheels, but there is no evidence that they are in the least violent.

The Terrorist Unit and the Fixation Persons Unit were axiomatically established to counter violent extremist terrorism.  Decent policemen do not want to find themselves doing dirty washing.  Dirty washing is the silencing of opponents criticisms.  Governments of different political ideologies change regularly.  When the law is abused by politicians, police are legally bound not to be complicit.   The previously well-intentioned NSW FPU has deteriorated. It is doing dirty washing, for the NSW state government.  Insult to injury has been the woeful incompetence, maybe a blessing in disguise.

A decent person may think that getting the FPU to accept a complaint, would require expert opinion and due diligence.  Such a person may think that the FPU may themselves be fixated on not falling into the trap of doing dirty washing.  A spokesman for the NSW Police, Supt. Mark Walton confirmed on video that the FPU relied on ordinary police to make professional psychological assessments re ‘fixation neurosis’ vis-a-vis citizens.  The NSW police are willing to make arrests, without a warrant, based solely on their own personal assessments of ‘fixation neurosis.  If this is not Stalinistic deterioration, what is?

The writing is on the wall, if you complain about your state Government, the ‘Fixation police’ may pay you a visit.  It has already happened, see Chris Nyst example.

I conclude by saying that we are generally speaking pro-police.

One thought on “Have you heard about the Australian police ‘Fixated Person’s Unit’?”