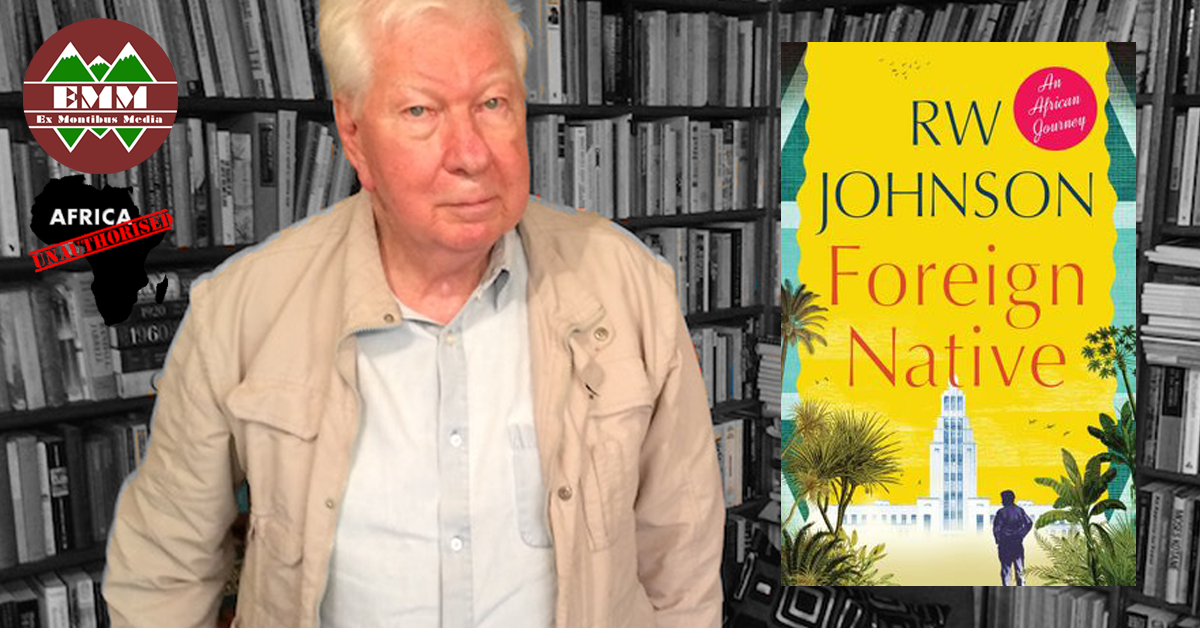 RW Johnson’s new book, ‘Foreign Native’, is enlightening, entertaining but also disturbing. But, like everything he writes, the narrative reeks with honesty. I humbly hold him in the highest regard, not only for his scholarly brilliance but because he is one of those very rare individuals; a deeply committed liberal, so prominent in the current political discourse, who had the physical courage to take serious risks for his beliefs but also to admit on reflection he made some big mistakes.

Unbeknown to me, the author, in his early activist days, consorted closely with the militants of the SACP (South African Communist Party) and other groups involved in sabotage and various anti-government activities that were often considered treasonous; and  were it  not for his being awarded a Rhodes Scholarship to Oxford, he may well have joined some of his erstwhile comrades serving lengthy jail sentences.

Although British born, RW ‘Bill’ Johnson came to South Africa as a boy and grew to love his new homeland and take an abiding interest in the welfare of its people. He was repulsed by ‘apartheid’ and set about helping destroy the system, from within, and then from abroad where he worked closely with the ANC and other political exiles in opposition to the Nationalist government of the day.

One of the many interesting admissions he makes is that, in retrospect, he was, in a sense, blindsided by his hatred of the status quo and thus did not think deeply enough about the consequences of replacing the regime he reviled. He now bluntly acknowledges the fact that the country so dear to him, is in desperate trouble, in the grip of a corrupt and incompetent ruling clique that has manifested itself as a political monster.

His academic and political journey is thought provoking because this is a man blessed with a brilliant mind who read voraciously and listened intently to some of the brightest here and abroad on his way to becoming a Fellow at Magdalen College, Oxford. And yet he got so much wrong.

This made me wonder. Though not on the same intellectual level, I also listened carefully to the political polemics of the day and like him, growing up in Rhodesia, I too grappled with issues regarding race and wealth distribution but I seem to have tumbled to the truth about the political fundamentals of our time a lot earlier than he did.

Although, I too attended university, this was not where I had my ‘Eureka moment’; it was part of an earlier learning curve, in an unlikely place, as a young soldier, suddenly and shockingly exposed to harsh realities, that brushed aside my doubts about the righteousness of the cause for which I fought and nothing I have seen since, has shaken the core beliefs learned during this time.

I also loved my country, understood the need for change, and I too wanted the best for all my compatriots of all races so I paid attention to what the ‘liberation leaders’ of the time were saying and I went off to war with some misgivings. I did ask myself if there was another way to resolve our differences without killing one another, and I did try to understand our opponents’ point of view; but I was quickly disabused of my slightly muddled mind when I became an operational soldier. Then I saw in gruesome detail what the enemy were doing to the very people they claimed to be ‘freeing’ and knew almost instantly, the dogma and rhetoric flowing from their leaders was a pack of lies, and that they and their legion of liberal-left supporters were either charlatans or useful idiots. In a matter of days, I think I may have learned more about African ‘realpolitiek’ than Mr. Johnson learned in many years at institutions of the highest learning.

Thus armed, I later studied law at the University of Cape Town and into the cauldron of the communist dominated faculty of Political Science. Most of the academic staff were on the side of the people I had been fighting against so I ran into trouble immediately and attracted the usual labels applicable to right-wing lunatics but this was a first-hand experience of realism versus idealism and never the twain shall meet. Most of what I heard from them I treated with contempt and nothing has happened to change my opinion. They, like Mr. Johnson, were so consumed by their loathing of the Afrikaner Nationalists and any form of white rule, they failed to see the inherent contradictions and destructive tendencies in those they supported so vehemently.

Which leaves me deeply concerned about a world soon to be led by graduates of tertiary institutions around the world.  Almost all of these establishments, are run and dominated by the same sort of fanatics, determined to indoctrinate students with their toxic, destructive view of our Judeo-Christian civilisation and culture. Their students are easy prey; youngsters away from home for the first time who have seldom known real hardship, have lived divorced from reality and are therefore vulnerable to being misled.  Most have already been rendered receptive to the lure of cultural Marxist thinking by their school teachers, themselves the products of higher education that has relentlessly propagandized successive generations of student teachers for decades. Education is assumed always to be a priceless experience but when learning becomes indoctrination, as is happening today, we in what is left of the world that was built on the tenets of Western Civilisation, are well on our way to self-destruction.

Having said all that, hats off to Mr. Johnson. Unlike so many liberals who seem to drift away when the damage they wrought is done, he gave up a prestigious position and comfortable life in England to return to SA after the advent of ANC rule to lend a hand in making the new dispensation a success. He was soon disappointed and does not mince his words when explaining why.

While pointing out that none of the whites who led Rhodesia or South Africa, ever used their high office to enrich themselves, he acknowledges that this stellar example was not followed by any of their successors. Starting in South Africa with Nelson Mandela who, “…nobody queried too closely how he came by his money and houses for these were the normal attributes of the big man”, he identifies other key players in ANC South Africa who followed Mandela’s lead.  This then set a woeful precedent; Cyril Ramaphosa quickly became a billionaire and then taken to a new level by Jacob Zuma who appeared to believe the whole country was his for the taking. The sense of entitlement to the country’s riches thus engendered, remains all pervasive today.

For anyone interested in Africa and more specifically Southern Africa this book is a pleasure; easy to read, hilarious in places and a rare insight into the people and personalities that have dominated the political space and shaped our lives; most of whom were known to this very learned and honourable man who remains committed to doing the best he can for the troubled land he loves.