A Letter to Lord David Owen 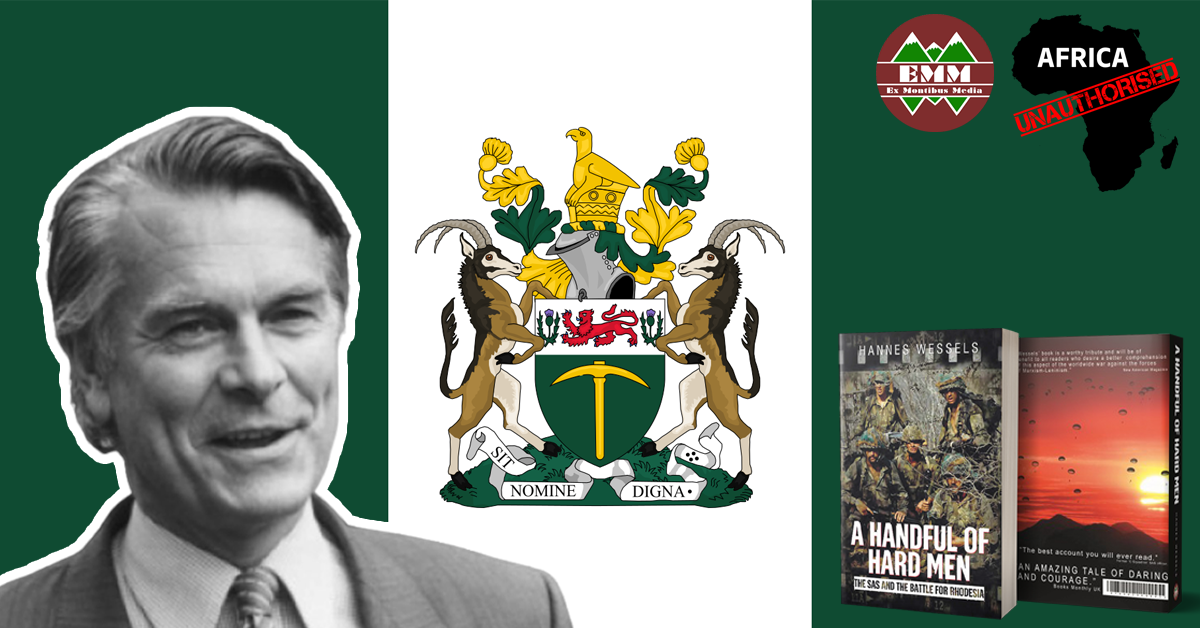 An acquaintance, having read my book, ‘A Handful of Hard Men’ which covered the Rhodesian war, the SAS and the political context of the time, penned a letter to former British Foreign Secretary Lord David Owen, which is printed below. To his credit, Lord Owen has given us permission to publish his response. I am taking the liberty of adding my thoughts below the two letters.

I am writing to you today as a sixty-year old Ex Rhodesian who served in the British South African Police until 1980, and due to the deteriorating security and economic situation in Zimbabwe under Robert Mugabe, had to leave.

Since then I and millions of people of all colours have left that country, because of the way that Mugabe and his ilk turned it into a dictatorship, that impoverished the majority of the population and destroyed democracy.

This could only have happened because you and the British governments turned a blind eye to the obvious intentions of the Patriotic Front.

You were given irrefutable evidence of their atrocities e.g. the Elim Mission massacre where eight missionaries men killed, women raped then killed, and four babies killed, and TWO civilian aircraft shot down, where any survivors were butchered on the ground…not a word of condemnation by you or anyone else in the supposedly civilized West!

Ongoing atrocities against the civilian populations of all colours were perpetrated but you chose to be Mugabe apologists/enablers instead.

You chose to support Samora Machel who destroyed Mozambique by nationalising private ownership and turned the country into a Marxist state!  WHY?

He chose to actively interfere in another country internal affairs with your support and denied the Rhodesian government the opportunity to negotiate a peaceful transition….WHY?

When Machel approached the UN complaining about the Rhodesian response, no one asked him to account for his destructive policies that destroyed his own country….WHY?

Mugabe killed off any traditional black leaders that were willing to discuss peace and the way forward with Ian Smith…you failed to hold Mugabe to account for this…WHY?

You chose to support Kenneth Kaunda in Zambia even after (he) held “elections” where he was the only candidate!….WHY

Why did you not take the time and effort to visit and sit down and assist to reach an agreement….WHY

Even at the height of the war there was still a lot of goodwill between the races…you allowed Russia and China to influence events…WHY?

Did you at any time take the effort to look at the whole picture?

Did you know that even after independence Ian Smith was not protected at all and used to ride his bicycle to the shops! Supposedly the most hated man in the country and a world pariah! Funny how Mugabe needed motorcades with Army trucks and helicopters overhead as protection….and to feed his megalomania.

If you had taken the time and effort to understand the dynamics of the time and backed a peaceful organized transition to reasonable black moderates, and disowned the radical black opposition, things would have been very different and I would still be home, along with millions of others.

I know you will probably not even get to read this as your gatekeepers will block it…but on the slight chance you will my question is this:

Do you have any regrets over how this was handled?

Does your conscience prick you at all or are you still in complete denial?

Zimbabwe could have been a beacon but is now a disaster…….it could have even shown South Africa the way forward as well!

Both of whom moved to Southern Rhodesia after being encouraged to, after WW2, and then failed by YOU.)

Thank you for your email.  From 1977-79 I made a huge effort to sort out a negotiated settlement, visited Africa more than any other Foreign Secretary. All the time the fighting on the ground meant Ian Smith was losing control of more and more of the country and Mugabe was gaining more territory and with it a larger army and with that more voters.

Our Anglo-American initiative should have been embraced by Ian Smith. To have the power of the US linked to a settlement would have brought peace. The loss of President Machel, the best leader Mozambique ever had, in a dubious plane accident was a tragedy. Ian Smith was the problem since he could not compromise with reality and fought a hopeless battle to uphold white rule in what was Southern Rhodesia. The world had changed, Botswana next door proved that black majority government could be made to work, and it still does in that country. Ian Smith instead, as so often, brushed aside the Anglo-American proposals which was the one solution that could have held off Mugabe. By 1980 the opportunity was lost.

I suggest you read more about what actually went on during this period. Not just what I have written but others too looking back. I wrote my account in my autobiography ‘Time to Declare’. I am sure there are second-hand copies going cheap in the Penguin edition.  The most recent article I wrote I attach reviewing a good book. I hope you will conclude from this that I was no supporter of Mugabe: the true story is how I tried to give Nkomo a chance working with Muzorewa and others. It was not a sham transfer of power. Those days were long gone, and Kenneth Kaunda was not opposed to it, nor were many sensible whites in Rhodesia.

Reading Lord Owen’s letter I am left thinking he provides an excellent case-study for anyone wishing to understand the mindset of a classical, committed, left-wing, liberal socialist; ‘fathers’ of the people who now constitute what is known as the ‘woke’ movement. Typical of these individuals, they refuse to acknowledge reality. A perfect example of this is his observation that President Machel was, “the best leader Mozambique ever had,” before going on to try and muddy the waters with reference to his death, “in a dubious plane accident” which he laments. How does a ‘liberal’ applaud the rule of a man who, on assuming power, immediately transformed the country into a brutal Marxist dictatorship, banned Christian worship, collapsed the economy by putting the Portuguese to flight, and quickly constructed tropical gulags to accommodate any dissenters. Is this, one wonders, the result he was working so hard to achieve in Rhodesia/Zimbabwe? And his reference to Machel’s death is irrelevant because it happened six years after Zimbabwean independence. Or was that too Ian Smith’s fault?

Right from the moment he entered the stage following the death of his predecessor Anthony Crosland, Owen displayed undisguised contempt for then Prime Minister Ian Smith and his lieutenants. Wielding enormous power and influence, he was a full-blooded left-wing socialist who was going to seize the political opportunity to show black Africa how much he despised the white colonials and their ‘rebel’ leadership – and this he did.

Ian Smith described him at their first meeting as “… one of those petty little men trying to fill a job which was too big for him, using an arrogant posture in the hope that this will impress his audience.” who “… drawled on with his sanctimonious utterings”. At a later stage, on arrival in Salisbury for meetings with a delegation that included US Secretary of State Cyrus Vance and UN Ambassador Andrew Young, Ian Smith wrote fondly of the polite and respectful demeanour displayed by both of the Americans while describing Owen sweeping in “… with a grand expression of self-importance on his face … which his meagre and slouching physique was unable to match.” Smith goes on to describe how Owen, then brushed brusquely past him and his team and with a gleeful flourish engaged and embraced all attendees who did not happen to have white skins including an overawed messenger who Owen mistook for a politician.

Unsurprisingly, Ian Smith again found himself up against a British bigot whose mind was made up and who was hostile to any political dispensation that did not immediately favour Mugabe and the militant extremists. This became crystal clear following the butchering of British missionaries and their children by a ZANLA gang at Elim Mission in the Vumba Mountains of eastern Rhodesia. Owen worked energetically to play this atrocity down and then when press attention persisted, he suggested the Rhodesian army was responsible which we now know thanks to the confessions of some of the perpetrators, was a monstrous lie. Rhodesian negotiators were up against a British-built brick wall of bigotry, and thus an opportunity to find a way out the political quagmire was missed, and the British  drove the country down the road to ruin.

Years later, on reflection, while acknowledging his role in saving Mugabe from assassination and helping secure his path to power, Owen implies he was right. “Assassination was not the route to peace..” and then contradicts himself: “… if we could have avoided Mugabe being the top man then the history of Zimbabwe would have been a great deal better one”. This is disingenuous and dishonest; the fact is he refused to listen to those who tried to tell him this very fundamental fact at the time because he was willfully blinded by his bigotry against the Rhodesians.  They pleaded with him to be reasonable and fair but he ignored white or black moderates who were not calling for the extreme solution demanded by the Frontline States and most of Africa.

Owen’s assertion that, “Ian Smith was the problem since he could not compromise with reality.” does not stand up to history. This is the same man who settled with the British government in 1972 when Douglas Home was Foreign Secretary; agreed, with much reluctance, to John Vorster’s ill-advised, Détente initiative in 1974; buckled to Kissinger’s demands in 1976; ultimately agreed to a rapid but orderly transfer to black rule; and held the only genuinely free and fair general election in the history of the country, when he handed power to Bishop Abel Muzorewa. The problem for Smith was whatever he did, short of handing over everything to Robert Mugabe, was never enough for the likes of David Owen.

To be sure, Owen was representative of many of his countrymen who simply loathed white Rhodesians, and I think this was at least partly because their distant African cousins, along with a strong Afrikaner community and their energetic and hard-working black compatriots, had been too successful at building a fast developing multi-racial, African nation and they resented this. Just as Hilary Clinton, would refer to 70 million Trump supporters as ‘deplorables’, white Rhodesians were similarly vilified by the British Establishment..

Like all liberals, convinced of their moral superiority and rectitude and overflowing with arrogance, Lord Owen, is simply unable to admit he made a mistake …    he ‘knew’ he was totally right in his actions – never had any doubt about the value of what he achieved.

Mind you, would anyone really want to admit that he played a pivotal role in orchestrating the destruction of a vibrant young country, brimful of promise, and thereby condemned millions of innocents to lives of poverty and misery, and thousands of others to premature deaths?  Probably not!

23 thoughts on “A Letter to Lord David Owen”