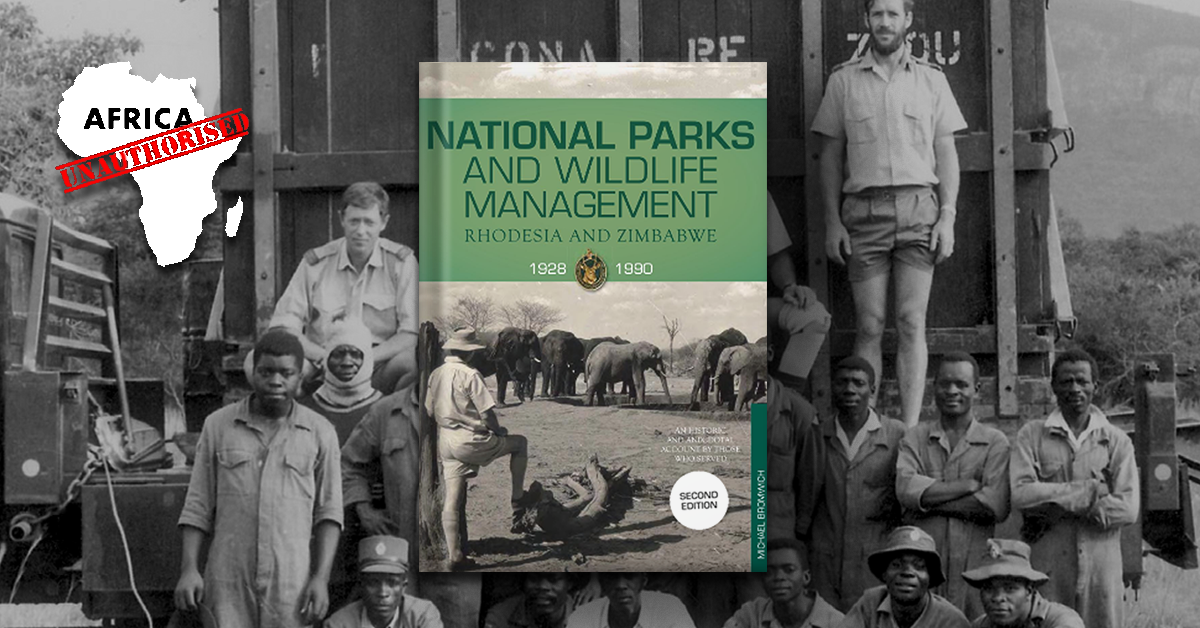 For anyone genuinely interested in African wildlife and conservation Mike Bromwitch’s updated second edition of the 80-year history of the Rhodesian Game Department is not only hugely informative, it’s also an action-packed, true-life adventure story about extraordinary people and extraordinary events during an extraordinary time which kicked off in 1928.

One example: A little known fact that comes to light  is that the heaviest and most sustained conventional attack of the Rhodesian war was launched from Zambia against the lightly defended Game Department post at Mana Pools in the Zambezi Valley on the 17th May 1979. Little did the Rangers and their Scouts know at the time, but a major strategic decision had been taken by the enemy High Command in Lusaka to overrun and capture a Rhodesian government facility as a prelude to a full Soviet-backed invasion of the country and they were the opening target.

Initiated by a late afternoon bombardment from across the Zambezi involving the use of artillery, mortars, rockets and recoilless rifles, one of the rangers, Doug Evans, was hit in the neck by shrapnel in the initial salvos but fought on. The barrage was followed up in the night by a full-blooded infantry assault on the lightly manned and armed position. Their limited arsenal included WWII vintage Bren Guns, but using what they had to excellent effect they held the enemy off in intense fighting that continued throughout the night with waves of attackers coming at them from different directions.  Vital assistance was provided by a four-man section from the Rhodesian African Rifles who fought valiantly throughout. So determined were the enemy, one of their number was shot on the fence as he tried to climb it and clamber over into their position. Another was found later, dead in a tree, being fed upon by a leopard.

In the morning air support and an ammunition re-supply arrived arrived and the attackers withdrew, having ransacked and looted the accommodation leaving numerous blood-trails as they made their way back to their sanctuaries.

This is only one of the many incidents of armed attacks on the country’s wildlife custodians and quite incredible to be reminded that despite all this hardship they continued to perform their primary task which was to preserve wildlife. Their devotion to duty was total; many a Rhodesian soldier learned the hard way; it was better to be run over by a Rhino and risk injury and possible death, than shoot in self-defence and risk the wrath of the Game Department. When the war finished in 1980 the Black Rhino population of the Zambezi Valley, was not only intact, it was thriving, and several men, dedicated to their survival, had died in the line of duty.

Fast forwarding to the present, and pertinent to the debate that rages on currently is the history related regarding the country’s elephant population which today, at roughly 70,000, is the second highest after Botswana. Bromwitch points out that as far back as the early 60’s Wankie (now Hwange) Warden Ted Davidson warned the Park’s carrying capacity was being stretched when it was far smaller

In the late 70’s respected Research Officer Basil Williamson estimated that some 28 species of trees had ‘disappeared’ or been eliminated by elephant in the southern area of the Park alone; the elephant population then was less than half of what it is today. It was recommended the population be reduced immediately to 12,000, and even this, by some informed estimates, was too high. Ecologists, including former Director Graham Child, believed the optimum number was 4,000.

With inaction, triggered by pressure from so-called ‘environmentalists’ and ‘anti-hunters’ the Park’s carrying capacity is being grossly exceeded, habitats have been destroyed and modified beyond recognition to the detriment of a variety of birds and mammals.

“More is not better,” writes Bromwitch, “but, unfortunately this is what is being punted by the ‘Green Movement’ and likeminded thinkers – sadly there is a belief that the more one sees the better! Seeing a thousand elephant in scarred conditions similar to Delville Wood, which much of Hwange now resembles, is deemed better than seeing fifty elephants in a heathy woodland in harmony with a wide variety of antelope, various raptors and a bunch of small mammals. Hwange National Park is not an elephant park, none of our National Parks are; they were proclaimed for the conservation of all species – animal and vegetation alike.”

The Rhino story he relates is nothing less than tragic and a testament to the fact that political events reach far beyond the affairs of man. He recounts the severe goring of Rupert Fothergill (famous for managing ‘Operation Noah’ during the damning of the Zambezi at Kariba in the early 60’s which is well covered in the book) by a Rhino during a translocation exercise and the strenuous efforts that followed during the war years to move these animals to safer areas. As a result, healthy populations were established and growing in Hwange and Gona re Zhou when the country became Zimbabwe.

The book covers the largely untold story of the ‘Rhino Wars’ involving regular and covert operations and the Rangers who, with fortitude and courage, took the war to the poachers. Sadly, because race trumps everything in Zimbabwe, virtually all the white personnel were pressured out of the Department post independence, and apart from small pockets of these animals in privately run sanctuaries, the population has been wiped out, and the war, all but lost.

Six hundred pages and over 700 photographs, it is a unique and enthralling account of the finest wildlife conservation agency the continent has ever seen. As records gather dust and people and events are forgotten, this story is particularly poignant, telling as it does of the people, men and women, both black and white, and the country, firstly Rhodesia and then Zimbabwe, that contributed so much to pioneer conservation and sustainable wildlife management.

If you wish to purchase the book contact Mike Bromwitch: mikebromwich1@gmail.com.

7 thoughts on “The History of the Rhodesian Game Department”