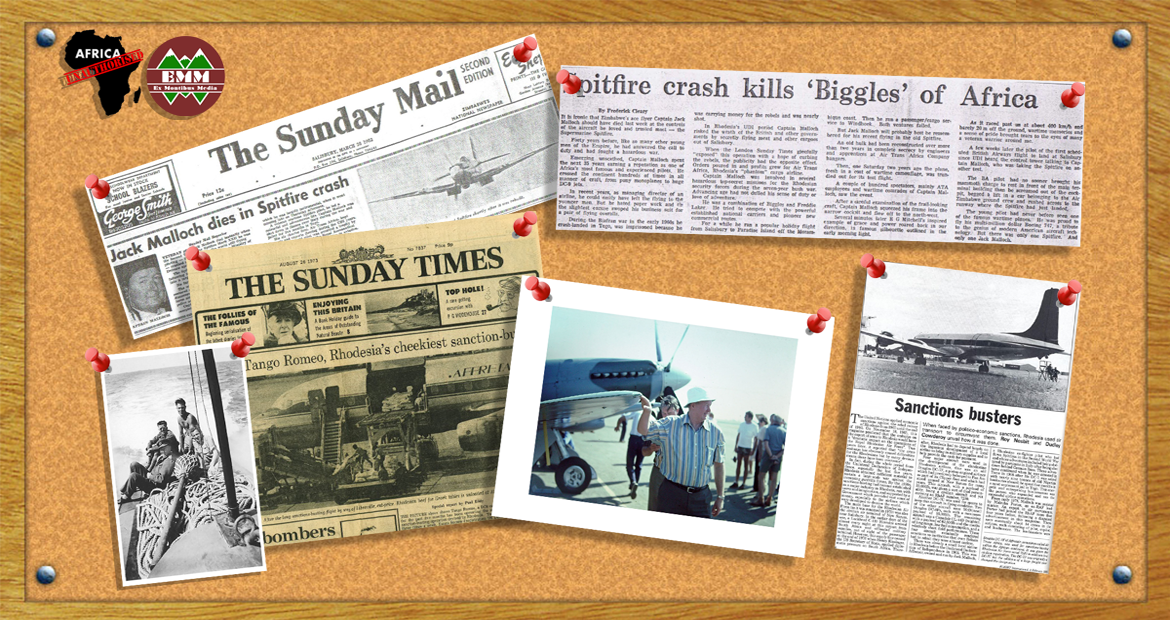 Coming out of a country that produced a surprising surfeit of colourful characters Jack Malloch is surely one of the most extraordinary.

Raised simply, in a religious Rhodesian family and taught to eschew war, his love of flying saw him arrive at the controls of a Spitfire in 237 Squadron in WWII where he first met the future prime minister Ian Smith. Shot down eventually over northern Italy he fell in love with a young Italian girl who, working with the partisans, helped him to safety but the excitement of war had left an indelible impression on Jack Malloch. For most of the rest of his life, he would combine aviation with action-packed African adventure.

Writing in simple, informative, unflattering style, Alan Brough uses the facts revealed through years of thorough research to detail Malloch’s remarkable life-story in his book titled; ‘Jack Malloch, Legend of the African Skies’. As someone who has read extensively on Rhodesian and African history there was much here that I did not know.

The Congo story, where Jack played a pivotal role through his close friendship with Moise Tshombe, the Katangese secessionist leader, is related in all its gruesome awfulness. In some detail, we are reminded of the brutal destruction visited on peaceful people by a United Nations force under the control of Secretary General Dag Hammarskjöld in concert with ruthless, cannibalistic Simba savages. Seeing himself as a ‘liberator’, determined to rid the new country of Europeans, Hammarskjöld was enraged by the interventions of buccaneering battlers like Mike Hoare, Jack Schramme and Bob Denard. He sought their elimination from the conflict and eventually succeeded. His legacy is a blood-soaked, failed state.

While Malloch flew for hire and had to have an eye on commerce, he was also a humanitarian, a staunch patriot and a devoted family man, motivated throughout his life by doing what he thought was right and invariably in support of the underdogs. After the Congo, came Biafra, the Nigerian civil war and another armed secession which again drew in the great powers where they waged war on one another by proxy. As in the Congo, the ‘good-guys’ Jack backed were eventually vanquished. Interestingly, one of the last men standing, rescued by Malloch’s aircraft, was Jan Breytenbach, who went on to become one of South Africa’s great special forces soldiers.

Soon, with his homeland under siege, following the Unilateral Declaration of Independence, Malloch was compelled to deploy his formidable flying and logistical skills to the protection of Rhodesia. This was a fight he was determined to win, and his first adversaries were the very people he had fought for in WWII. With Britain planning to invade and end the ‘rebellion’ violently, Jack went to work on thwarting their plans. Ironically, only a few months before UDI, Malloch had come to the assistance of beleaguered British forces in Yemen and only through the display of exceptional flying skills, made it out of there.

The intrigues and double-crosses described by Brough are numerous, fascinating, and in some cases unrecorded. Both the United Nations and the British government, while committed to the demise of the Rhodesian government ended up hiring Malloch’s aircraft when he wasn’t using them to break the economic embargo they had imposed on his country. The sanctions-busting stories are detailed and fascinating and the critical role played by Gabon’s President Omar Bongo in the success of these operations is well explained. Thanks to Omar, massive quantities of Rhodesian beef and tobacco found its way to Europe and generated the vital revenues the country so badly needed to survive. While the CIA and MI6 were watching Malloch like a hawk and worked assiduously to stop him, they too, on occasion had to turn to the renegade Rhodesian for help. Jack, ever personable and helpful, seemed to bear few grudges and found it hard to say no to anyone in trouble, even his enemies.

When operations out of Gabon were curtailed the pivot shifted to Oman, thanks to powerful support forthcoming from Tim Landon, ‘The White Sultan’, whose brother Chris was a Rhodesian rancher and close friend of PK van der Byl, Minister of Defence and Foreign Affairs. To the fury of the British government, the country’s leadership, under Sultan Qaboos Bin Said, who Landon had helped to power in a coup, made little secret of the fact that they were supportive of the Rhodesian cause and provided logistical and diplomatic support along with oil and vital spares and equipment needed to sustain the war.

There is a fascinating account of Jack’s connection to the unfolding drama of the Falklands war and unbeknown to me, he played a key role in the early days of the Iran-Contra affair which almost destroyed the Reagan presidency. When the CIA initially decided to move cargo in and out of there, Malloch with his extensive contacts there and local knowledge, was the man they turned to. The love-hate relationship with the American intelligence community continued.

Stories of derring-do appear throughout the narrative but there is also reason to laugh. It turns out the first Zambian protest to the UN General Assembly about being ‘bombed’ by ‘Rhodesian planes’ was actually crates of contraband being dumped from one of Malloch’s planes flying illegally over the country. On two occasions, violations of Angolan air-space triggered the scrambling of MIG interceptors and only smart airmanship saved the day for aircraft and crew.

On reflection, I ask myself who might have done more than Jack Malloch to help Rhodesia survive 15 years of sanctions and war and I’m a little lost for answers; he really was in a league of his own when it came to commitment, innovation, skill and daring.

To sum him up, his own words say it all: When asked why he was not writing a book about his life, Jack shrugged his shoulders; ‘I have done nothing of note,’ he said.

An amazing gentleman died behind the controls of his beloved Spitfire on the 26th March 1982. This is a book anyone interested in Africa or aviation, will enjoy and be enlightened by. 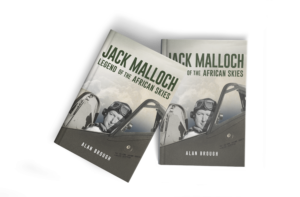