It has taken the well publicised murder of Tristan Voorspuy on the Laikipia Plateau to draw attention to the recent ‘land invasions’ in northern Kenya which provide a clear example of the environmental tragedy unfolding in Africa.

On one side of the coin, farmers and ranchers who have planned and developed within their means; on the other, reckless pastoralists with large families and herds of cattle they cannot feed or water because of poor planning and ecological abuse. As is nearly always the case in Africa the conflict quickly takes on a racial profile because the responsible ranchers happen to be white and the irresponsible ranchers are black.

Voorspuy, South African by birth, served in the British Army as a Guard’s officer and this has excited the British and world press. Sir Max Hastings, writing in the Daily Mail has suggested this killing is a strong signal to Europeans in Africa that the end is nigh. Hastings, it should be noted was a strident critic of the white Rhodesians when they tried to stave off the accession to power of Robert Mugabe, so this is partly a self-fulfilling prophecy.

Sadly, the international press chooses to ignore similar activity in South Africa. In the first two months of this year 26 white farmers have been murdered, more have been wounded and there have been more attacks on homesteads than in any period since the ANC took over in 1994. President Zuma has ratcheted up the rhetoric calling for Mugabe-style land-seizures and it appears the stage is set for another ethnic cleansing.  Hastings may well be right.

With Europeans on the ropes the future for wildlife and the natural environment in Africa has probably never looked so bleak. As far as the continent is concerned we live in a world that has allowed the human population to multiply without control and all other forms of life simply suffer the consequences. Thanks to the efforts of donors like Bono, Bob Geldhof, Warren Buffett and Bill Gates and the flow of Western aid, population growth is logarithmic and unsustainable without international intervention and support. No mention is made of ‘planned parenthood’ or ‘family planning’ anymore because that might be considered ‘racist’, aimed at reducing the number of Africans and other peoples in  in the Third World. Who knows, it may now be a ‘hate crime’? People must be allowed, nay encouraged, to have as many children as they wish and should not be expected to concern themselves with how to support their progeny.

Thanks to uniformly atrocious governance, real structural progress aimed at accommodating and managing population growth in Africa is slow to non-existent. Agricultural techniques remain primitive and environmentally insensitive with ‘slash and burn’ and riverine cultivation being the order of the day. As large swathes of land are rendered unproductive through abusive land husbandry, the human tsunami marches on, wiping out all forms of wildlife and habitat in the ever-expanding search for new soils to till. On the present trajectory there is little doubt most of Africa’s wildlife will soon be converted to protein to feed the growing masses and all will have been lost, never to be seen again.

Against this backdrop a few brave men, like the late Tristan Voorspuy, fight on. Darrell Watt is one such individual and his plight exemplifies the reasons why liberals, NGO’s (Non Governmental Organisations), aid-agencies and the pseudo-benefactors of the celebrity-billionaire elite are held in such contempt by people in Africa who put their lives on the line for wildlife.

Watt, a venerated former SAS soldier is everything liberals assume they love to hate. A blue-blooded heterosexual, gender-neutral bathrooms do not concern him, he does not believe the State or anyone else owes him a living, he knows he must fight his own battles  and verbal assaults of the kind that would be criminal in some cases, bring him to loud laughter. He once battled hard to try and protect an advanced Christian civilisation in southern Africa and was vilified. He knows, simply because he has seen and most of the world has not.

Despite enormous challenges he soldiers on and this time to save a pocket of wildlife in a pristine wilderness on the Kafue River in western Zambia. His resources are very limited but he leads a compliment of dedicated game-scouts in an ongoing war against poaching that he is winning because he is a master of the bushveld, blessed with skill, cunning and guile and he is a fearless, charismatic leader of men who engages his adversaries with relentless tenacity.

While the doyens of the various wildlife and humanitarian agencies cruise the streets of the capital in their tailored suits and state of the art Land Cruisers and Range Rovers, Watt walks the wilderness he loves, manages his operation on a threadbare budget and urges his men on to astonishing heights. No charity, NGO or aid- agency offers him a cent because he’s white and in their view should not be there in the first place. What they prefer to ignore is the fact that he prevails only because of the support of the black people he works with and that of the tribal community that surrounds him. While he sets a starling example of successful multiracial integration aimed at saving wildlife and enriching the local populace he is sneered at and ignored. Repeated attempts have been made on his life but he is utterly undaunted. If he were to be killed, his death would go unnoticed. This does not concern him.

When he took over the property in 2000 the game had been all but wiped out. Today it is a pulsating animal paradise with lion, leopard, hundreds of elephant, buffalo, and a multitude of antelope and other species. In the neighbouring Kafue National Park the game has been decimated and the plunder of what remains continues. Watt’s land is the last redoubt for the game of western Zambia and the last wildlife concentration in what was once a bountiful wilderness.

“I feel I came here to lead and teach,” says Watt. “Our success all comes down to my Scouts and the support of the local people. The Chief is my friend and his support has been key. We would not have had a chance without information coming to us from the local people on whereabouts and identity of poachers. Because they want us to succeed we will win. Without them I would not have stood a chance.

“One of my best Scouts is Jackson Kamwenda. He has eyes like a hawk and is an excellent tracker. On one occasion he found a small shred of cloth torn from a shirt on a thorn bush. He immediately left the tracks and went to the kraal of the man he was in pursuit of and arrested him. He recognised the shirt and knew immediately who wore it. Poachers have tried to burn behind them to destroy tracks but he simply circles the flames at speed, recovers the spoor and finds them. Since I have been in the field we have caught over 1,500 poachers and the authorities have had to increase the size of the prison in the nearby town of Mumbwa.

We have confiscated over a 1,000 weapons and countless bicycles.

“A real problem for us in the field is the elephants. They have been hunted and harassed mercilessly and so they are aggressive the moment they see people. They come for us and it’s pretty frightening. I have been chased for several miles in my car by angry cow elephants. We have had cars punched full of holes. Two Scouts have been killed by irate elephants.

“Strange things have happened in the field. One poacher running away from the Scouts was confronted by a Black Mamba which bit him. The next day his brother came to tell us he had died from the bite.

“Right now we are winning but the pressure is always on and don’t know what will happen if something happens to me. With so little game left in the area the onslaught will be overwhelming and the game will be gone in weeks not months. When this place goes it is the end of wildlife in western Zambia. The US Ambassador has spoken out about what is happening but nobody gets seriously involved. I feel like a lot of people are watching what is happening but nobody wants to get hurt so they keep a safe distance.”

Watt’s plight is both symbolic and tragic. All those high-minded humanitarians who traverse the globe lecturing on the environment and human rights can take a bow. They have all but succeeded in facilitating the end of the great game of Africa.

A Handful of Hard Men 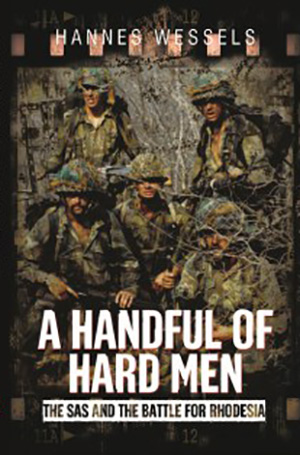