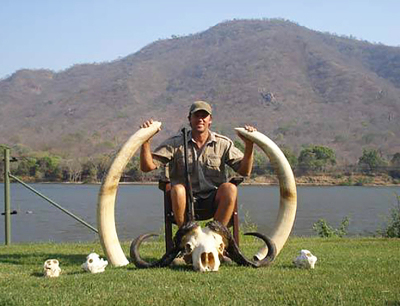 Since the beginning of time men have hunted; over millenniums, millions of men have killed millions of animals. It is the in the nature of man to hunt and kill because in the not too distant past, if he did not hunt and kill, neither he nor his dependants would survive.

In the modern world, particularly in the developed world, there is reduced reason for men to physically engage in hunting but the innate desire remains, it’s quite simply in the genes and men (and women) are not going to stop doing it any time soon. That is if men are prepared to take a position and defend themselves. Sadly Glenn McGrath, lambasted by the mandarins of the social and mass-media who mercilessly hunt down selected people they know will have a little chance of a fair hearing in a dumbed down world, has begged for forgiveness. He has expressed his ‘deep regret’ while conceding his participation in a Zimbabwean hunting safari in 2008 was ‘highly inappropriate’.

Regrettably we live in an age, where the majority of people, even in relatively sophisticated countries like Australia, know little or nothing of the real dynamics of wildlife conversation in Africa or for that matter, anywhere else. If they did, and hunters were allowed to engage in rational, informed discussion with their accusers, acrimony would be avoided, but more importantly, constructive debate in the countries of the ‘West’ might lead to better policies and more effective support for conservation in Africa which might save the very animals the hysterical ‘animal rights’ groups claim to be so concerned about.

The fact is Africa’s wildlife is being annihilated and it has absolutely nothing to do with people like Glenn McGrath, who generally pay large sums of money to engage in highly selective, carefully planned hunting that is easily sustainable and gives game a critical financial mass that provides the incentive for governments, concessionaires, rural tribes-people and land owners to conserve rather than consume their wild animals. Bear in mind this hunt took place in Zimbabwe where much of the wildlife resource is owned by individuals who care nothing for the aesthetic value of wild animals and experience no instinctive, atavistic desire to love and protect forms of life they see only as dangerous and as a source of protein. The only way you might now protect what lies in these threatened domains is by convincing these ‘owners’ that it is more profitable for them to conserve and allow carefully managed hunting. Fail to do that and they will soon kill it all. McGrath and his ilk provide the vital incentive to conserve.

As I write this the following report comes to hand from professional hunter Ivan Carter: “In 1995 the entire Zambezi Delta system in eastern Mozambique had a total of less than 1,500 buffalo as recorded with an aerial survey. Hunting companies undertook the task of restoring the area being that game was too sparse and the area too remote to interest any other safari activity …  the hunting companies had to invest heavily with no return into their anti poaching and management.  Today at the last count just a few weeks ago in excess of 20, 000 buffalo were counted…. government receives trophy fees and concession fees and the game is thriving and the local people starting to see value.  This picture to a non-hunter or someone unwilling to try and understand represents carnage,  in reality it represents the very core of what has turned this whole ecosystem around to the point where one can hardly drive 200 yards through the concession without seeing wildlife !! All (every cent) thanks to hunters’ dollars!

When the dust settles from this latest furore it would be interesting to know from all those who have clambered on the bash-McGrath bandwagon how many thousands of chickens, sheep and cows they have consumed in between venting their vitriol on this gentleman? And, one must ask of them, did those birds and animals they filled their faces with have the slightest chance of survival on being committed to the slaughter-house? We ask because the game that McGrath went after certainly did. And did they, the anti-hunters, incur any risk for the pleasure of gorging themselves on the flesh of a life lost? They certainly did not if you exclude the chance of slipping in a supermarket but McGrath did take some risk and that is why he was there.

Hunting elephant and buffalo may not excite everyone but it certainly is challenging and it is risky and being the kind of man I suspect he is, he wanted to have a chance to put his life on the line and do something dangerous. Tracking, toughing it out, challenging danger and being among like-minded men has been a gentlemanly pursuit forever but it looks like the liberal-fascists may win again. Paradoxically, just as they have recently won on the cricket field where ‘sledging’ is now effectively banned. I’ll bet Glenn McGrath never gave a toss about what anyone called him on the pitch; he would have soaked it up, given as good as he got and rejoiced in doing what men do which is look after themselves and their mates. That was before the ‘politically correct’ custodians of the game intervened and snatched away a quirky, but beloved culture of the sport of Test cricket and the game is poorer for it.

I feel sorry for Mr. McGrath but what a pity he declined to do himself and a multitude of decent people who happen to like both wild animals and hunting, a big favour and tell the chattering masses to go and get stuffed.