As excitement mounts and the world golfing community once again shifts its focus to one of the game’s greatest events it may interest followers of the contest to know this is in fact only one of two ‘Ryder Cups. The other one is no longer competed for but it did once play a big part in the game in a little known place in the world.

Samuel Ryder, the English entrepreneur and sponsor of the original cup and competition in 1929, made his fortune selling seeds in ‘penny packets’ and in his search for new varietals he travelled to what was then Southern Rhodesia in the early 1920’s.

He was immediately struck by the progress and vitality of the new country and the opportunities that beckoned particularly in agriculture. On his return to England he set about encouraging his daughter Marjorie and her husband Leslie Claisen to consider a farming future in the colony. With Samuel’s financial support they took up the challenge. On arrival the couple headed for the Eastern Districts and purchased ‘Matikas Kloof Farm’ near Umtali (now Mutare) in 1929. There they grew tea, cotton, maize and coffee while Marjorie involved herself with health-care for the natives.

Keeping with the family tradition the Claisens quickly became involved with the local golfing fraternity and provided funding to assist in the improvement of the town’s recently established Hillside Golf Course. As agriculture in the area expanded, the farming membership grew and a request was made to Samuel to organise a team from Britain to travel to the colony to compete against the locals but this did not transpire.

Instead, Samuel, wanting to maintain local enthusiasm for the game donated the Umtali Ryder Cup to Hillside Club in 1932 after directing that competition be restricted to farmers and their dependants only. It quickly became an important fixture on the local golfing calendar.

Forty years later, in 1972, sponsorship of the tournament was taken over by Central African Distillers under the ‘Oudemeester Brandy’ name and the format changed. Under the new rules, playing a 4 Ball Better Ball Stableford, the winners of the first 18 holes received a replica of Samuel Ryder’s shooting stick, the winners of the second 18 the ‘Oudemeester Shield’ and the overall victors were awarded the Rhodesian replica of the Ryder Cup.

Ironically, the same year that the Cup came to Rhodesia so did the iconic figure of Denis Hutchinson who was born in Umtali on the 14th March 1932. Denis’s story of how he came to be born there is fascinating.

“My Dad came out to Rhodesia from Northern Ireland after WW I,” says Denis. “He came out as a teacher. My Grandmother came to Rhodesia as a little girl with her parents who were early settlers and part of the ‘Moodie Trek’.

“In that Trek there were less than a hundred, led by brothers Tom and Dunbar Moodie from Scotland and they left Bethlehem in South Africa in May 1882. They hacked their way through an unchartered wilderness which was home to hostile animals and tribes-people but it was malaria that killed more of them than anything else.

“My Grandmother’s father was killed on the way in a hunting accident so she became a farmer in her teens. She was extremely strong and made men gape when they saw her muscle sacks of mealie-meal (crushed corn) onto her shoulders. It was tough in those days. The land was fertile and the rains were good but it was virgin territory and very sparsely populated. The local tribe was the Shangaans who were a warlike bunch having battled Shaka of the Zulus before moving north not long before the white settlers.

“Life was far more settled for my generation and Rhodesians were sports-mad people. Golf was very popular in Umtali and Hillside was really where it all began for me. I remember all the excitement generated in the town when the Ryder Cup weekend came around. It was a big part of the game in that beautiful part of the world.” 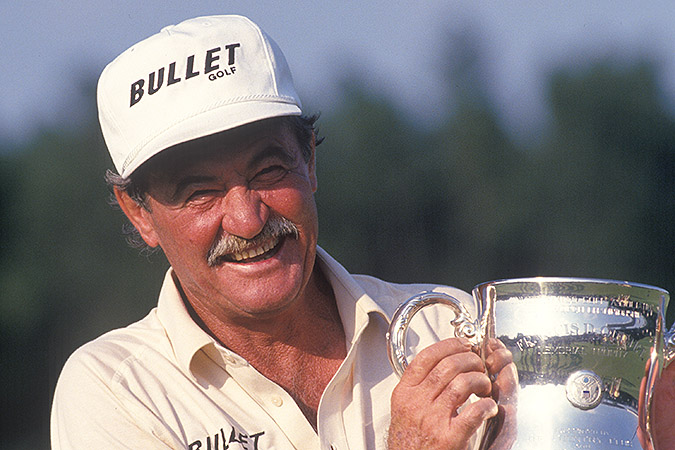 And unknown to most, a Rhodesian in the form of Simon Hobday almost came to compete for the original trophy.

“My best year in Europe I qualified for the Ryder Cup. I knew the British considered me a pariah because I was a ‘Rhodesian Rebel’ but I decided to make them squirm so I asked them to consider me for selection as a British National. They were furious that I, a ‘bloody horrible colonial’ from Rhodesia would be so impertinent but I demanded to know why I could not play. I reminded them I was born in what was then known as an ‘Imperial Reserve’ in Mafeking which was British territory and so I was effectively ‘one of them’! They hated to hear this.

“I had them scrambling for excuses. Initially they said it was because I had not been born in the UK, then they said it was because I did not live in the UK.  I pointed out other players had been born outside the UK and represented Britain and Tony Jacklin was resident in Spain at the time. This had them scratching their heads in a fury. Then they found something I had said about wanting to play for South Africa and decided this was sufficient reason to disqualify me. There was no way on God’s earth they were going to see Simon Hobday playing for England in the Ryder Cup but I enjoyed needling the bastards!

We Dared to Win – Available Now